How Habegger Blurs Frontiers With Stage, Sound And Lighting 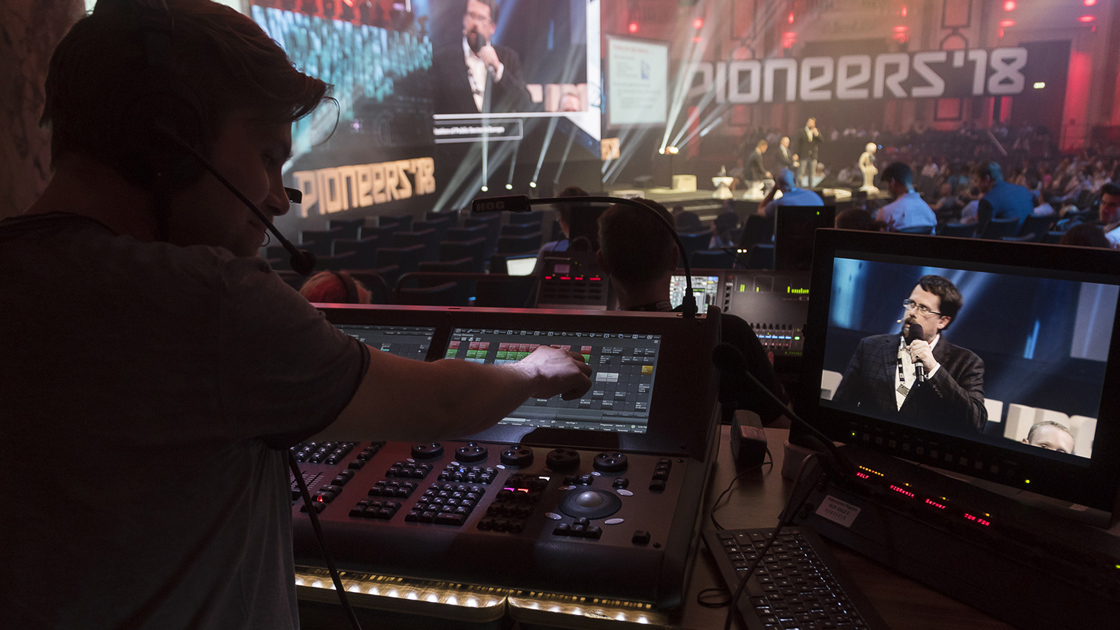 Regular visitors to our flagship event might well wonder how we come up with new stage, lighting and AV concepts every year. And with the unique challenges of our 500-year-old imperial palace venue thrown in? The truth is, it’s not entirely down to us. A lot of the flashy stuff is thanks to our long-term audio-visual partners Habegger. But the same philosophy lies behind their success: always thinking outside of the box! And they’ve been good enough to share a few of those concepts below…

It’s generally considered normal for the stage to be set up on the ‘short side’ of venue. This means those at the very front of the audience to get up close and personal with what’s happening on stage…but those at the back start looking for something else to do! But it’s worth reconsidering the stage position.

“Bring the stage closer to your guests,” recommends Michael Artner, Habegger’s Project Leader for Pioneers’18. “Many event designers believe that the classic stage position at the ‘head’ of the room is an immutable law. But you can do it differently!”

Pioneers’18 was a good example, since we wanted to recreate the Arena Stage experience. And together with Habegger, we came up with a completely new concept.

“We built the Arena Stage along the longest wall in the Hofburg’s ballroom,” continues Artner. “That means most of the audience was effectively sitting in the front row – at the centre of the action.”

“The Arena Stage was the first time in the history of the Hofburg as an event venue that the long side of the ballroom was used in this way,” adds Andreas Göltl, CEO of Media Apparat, another of our key partners, who also designed the stage shows.

The previous stage location was quickly repurposed into an additional seating area. Meanwhile the three-dimensional projection screens on the main stage ensured that the audience on all sides was really drawn into the Pioneers’18 opening show.

Beyond The Classic Rectangle

When you think of a stage, you’ve probably got a rectangle in mind. But this is another area where you can explore new ways of steering the emotion. “The shape of the stage can be adapted to the theme,” says Artner. Pioneers’18 was a perfect example: a zig-zag stage with no readily identifiable geometric shape fitted the Blurred Frontiers theme like a glove.

Playing with height is another opportunity to innovate, he adds. “If there’s a jury, for example, you can set the stage up with different levels, so the experts are watching the participants from above. That creates tension for the audience.”

The Pioneers’18 variation on these concepts was to take the jury off the stage completely. They sat in the middle of the audience, to the side of the stage both left and right of the crowd – but at a suitably elevated height.

In order to ensure that speakers make a memorable arrival on stage, you always have to think about the placement of any steps. “You have to consider which side of the stage speakers are going to enter from. Someone walking on from behind the stage makes a very different kind of statement to someone walking through the audience and appearing from the front,” says Artner.

One way to make an entrance really grand is by using mobile LED walls. At Pioneers’18, the audience watched an intro video when suddenly that screen would open in the middle and the speakers (or MC) would walk onstage through the gap between the walls.

The classic black curtain or simple wall behind the stage is a thing of the past. What’s happening ON the stage should always be the primary focus, but with a few clever tricks you can still bring the background into the scene, in order to engage the audience better or handle visual information more attractively.

One simple option is to have a projection area across the stage, on which video, graphics or information can be displayed. “There’s no limit to the shapes these surfaces can take,” says Artner. “It doesn’t have to be your classic 16:9 format. We’ve used round, curved, triangular and annular surfaces before. A lot of our clients also really like using their company logo as a projection area.

At Pioneers’18, the LED walls divided into four giant screens, all synchronised with each other to play specially produced videos. For the closing show, Media Apparat also worked with emotion-tracking suits that could transmit body movement to the screens – a unique way of using technology to bring and stage content and background together!

Different colours can send different messages. And colourful effect lighting can also enhance what’s happening on the stage. “With washlights and spotlights you can direct the mood,” says Artner. “Light and shadow creates contrast, and colourful spotlights allow you to put the emphasis where you want it.”

The lights achieved all this and more for the Arena Stage at Pioneers’18, always working in tune with the primary event colours.

The Pioneers’19 pre-sale starts this Monday, on September 17th, so be sure to keep an eye our website here!