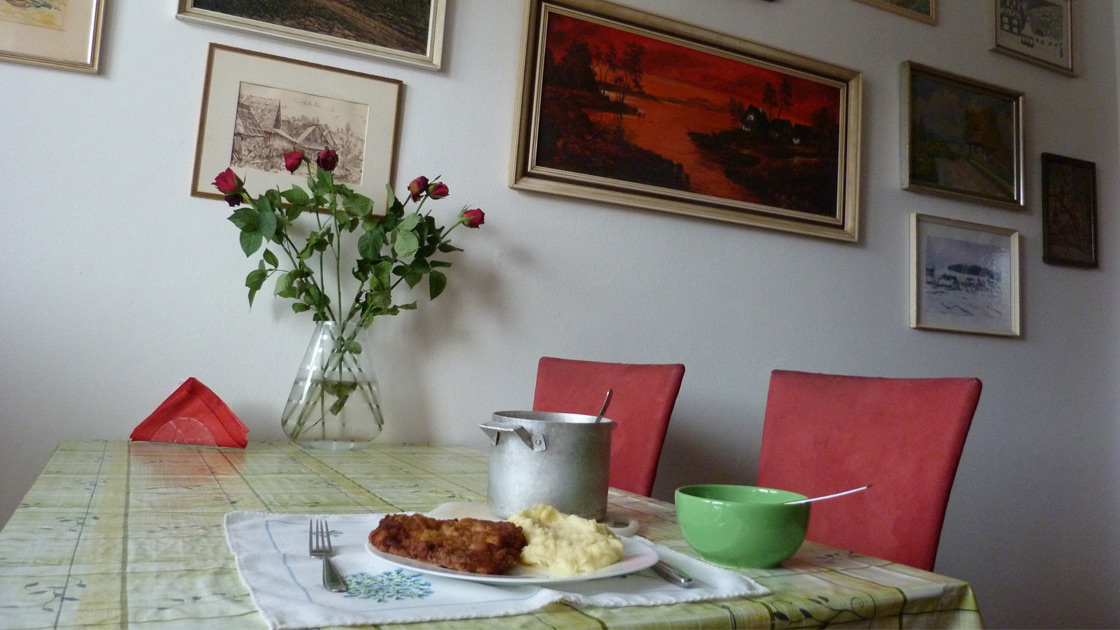 I’m just back from a long weekend holed up in a small village in South Moravia. Offering very little in the way of disturbances (apart from one street broadcast to the populace, which came across as quite Orwellian, but might have been about kittens for all I know), it served as the perfect writer’s retreat.

It also got me thinking about human augmentation technology. And it all started with a schnitzel.

See, one of the reasons my Airbnb stay was memorable was that the resident grandmother produced a number of home-cooked meals for me. One of which was a delightful chicken schnitzel with mash and ‘salat’. Just one example of the hearty Mitteleuropean food that I so unashamedly adore (apart from ‘salat’, which is pure rabbit food).

Seriously, it was massive. All her meals were. Whether it was the roast vegetables from the back garden or that never-ending bowl of pasta with lashings of home-made sauce, granny tried (in a good way) to kill me with food.

There’s a timeless pleasure in a home-cooked meal from grandma — even if it’s someone else’s grandma! And much of that pleasure comes from its essential humanity. It’s not just the food itself, nor the fact that not all the ingredients come from a supermarket. It’s the know-how of another generation. It’s the thought and it’s the care. It’s the smile on granny’s face when she sees how well that schnitzel’s going down.

I believe it would be a shame if technology robbed us of these kinds of experiences. There’s no app, nor any robot waiter, quite like grandma.

Yet at the same time, there are so many ways technology could have augmented that human side of the experience. A fully-functioning, intelligent translation tool that understands Czech, along with better mobile connectivity in Krepice, could have allowed us to communicate properly, using something better than the few German and English words she could remember from middle school.

A self-packing dishwasher would be a great spot of ultra-basic human augmentation, so that the poor old lady could say goodbye to huffing and puffing as she has to bend down to load the darn thing. (Dishwashers, by the way, are the most expensive, time-inefficient con of a ‘labour saving’ device known to man. I’ve seen ‘whose turn is it to load the machine’ fights far uglier than ‘whose turn is it to wash up’ arguments. When dishwashers send out a drone to clear the table, and then pack themselves, then we can talk about labour-saving. The dishwasher industry is ripe for disruption).

Another thing: granny seemed to spend most of her time visiting sick mothers and sick mothers of son-in-laws (is there a word for that relation?) in various local hospitals. Thankfully, she can still drive her car. But the mobility tech that’s coming — especially self-driving cars — is going to make it so much easier when she no longer can.

And as for those sick relatives, there’s just no argument against health tech innovation that will make early diagnosis and (especially) prevention better and faster. Not to mention the possibilities the next-generation health industry (wearable tech, for example) could bring for family members to monitor ailing relatives in their own homes.

But, like with the cooking, let’s not push tech for the sake of it. When I finally left the house on Monday, grandma was busy tending the vegetable patch. Sunshine and fresh air for her, and a sprinkling of human touch for those beetroots destined for the kitchen table. As long as she still enjoys it, let’s leave this interaction of human and nature alone. When she’s too old for garden work, though, then bring on the veggie patch robots by all means!

Technology that enhances our humanity without robbing us of it is the theme for Pioneers Festival 2017. Click here for tickets and startup applications (especially if you’ve invented a dishwasher that actually helps!)