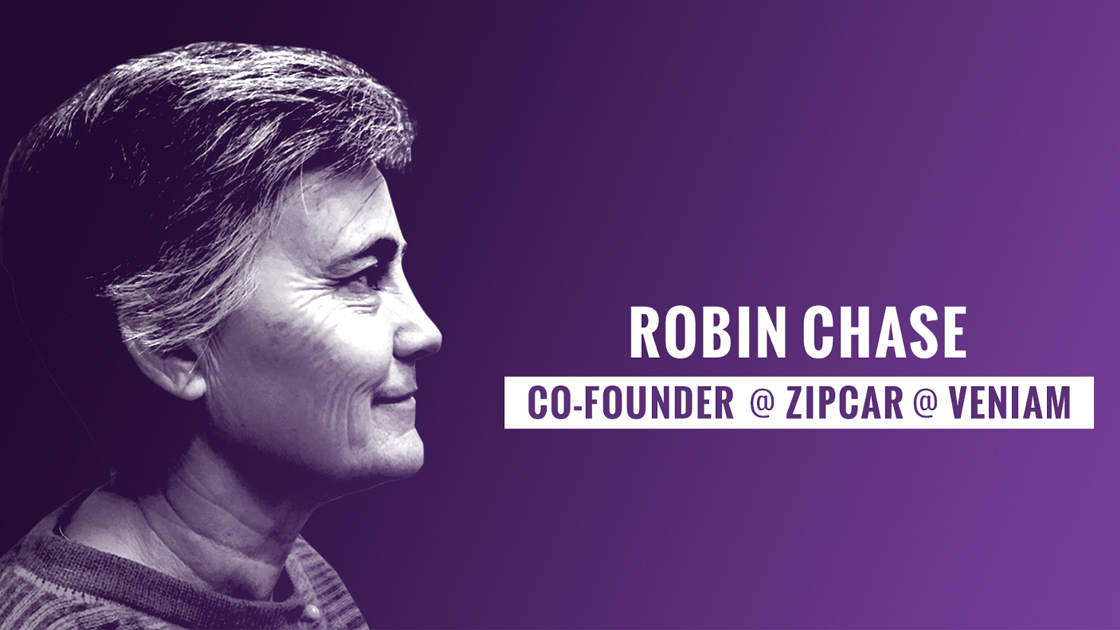 Best known for founding Zipcar and her thought leadership on a wide range of topics, serial entrepreneur Robin Chase is one person you really want to listen to if you’re in the future tech game. Which, one way or another, all of us are! The good news? She’s shared some of her top lessons in an exclusive interview with Pioneers!

Sell A Product You Love

Diving straight into taking your idea to market is always tempting, but be honest with yourself. Consider whether the product you’re selling really gets your pulse racing. If it doesn’t, maybe you can still go ahead, but you might want to think about hiring a salesperson with the right passion. On the flip side, if you truly love the product then you might find your repressed inner seller emerging.

“Before Zipcar, I was working with a partner on something called Project Professionals,” recalls Chase. “When my partner, who had been doing the selling, pulled out, I thought, ‘Oh, I hate sales, I could never do sales, I don’t want to do sales. Therefore I’m not going to pursue this.’

“But with Zipcar I loved the product so well that it didn’t feel like sales to me. Since then, I’d say I’ve felt very passionate about each of the things I’ve been doing, without any of the negative connotations that you apply to a salesman. It’s felt quite different.”

When Robin launched peer-to-peer car rental service BuzzCar in France, around 2011, she decided she was going to make a smartphone app. After all, it had worked with Zipcar in other places, right? Wrong. And in this case, the knowledge she thought she had proved her undoing.

“Our competitor Drivy had taken a completely different and better technology path. They made it possible to book on the web, and didn’t have a smartphone app at all. And their bet worked better than my bet. Mine was based on past experience, whereas they came with no preconceptions at all. So it’s interesting to think about whether or not experience is really a positive attribute.

“Being an outsider is a wonderful thing for entrepreneurs because you have no preconceptions about what works and what doesn’t. Or about what you know and what you don’t know…”

The role of chance and luck in the success of an idea isn’t a popular concept in our meritocracy, but Chase is under no illusions that sometimes the dice just fall in your favour.

By way of example of lucky timing, she refers to BlaBlaCar, Europe’s successful answer to the ride-sharing concept that she couldn’t get to work in the US with GoLoco.

“BlaBlaCar was doing the same in France that I was doing in the US, and then two incredibly fantastic things happened for him. One was the volcano eruption in Iceland that shut everything down across Europe for about ten days. He was there and ready when that happened, and that’s just dumb luck. The other thing was that he was ready and waiting when there was a French transit strike. In the US, we didn’t have transit strikes and we didn’t have volcanoes…”

…And Don’t Beat Yourself Up When You’re Not

The opposite is also true. Your startup might fail because it was an abominable idea, or because it wasn’t sold right. But it might also have been a great idea that just hit whatever the opposite of serendipity is.

“A friend of mine was closing their B round of funding with a firm that happened to be based in one of the Twin Towers. Right around the time of 9/11. So they went out of business, because they couldn’t refinance in that period of time when it was all calamity. And so they disappeared. And that was no fault of theirs.

“So people should not be so smug when they are wildly successful, but also they should not feel so terrible when some crazy thing outside of your control does happen.”

Think ahead — as much as you can

If your startup has anything whatsoever to do with technology — and it’s hard to think of one that wouldn’t — then it’s little use picturing how things fit into the landscape right now. It’s not easy, but you have to picture the world as it will be. That’s where the open-ended opportunities are.

Robin uses the example of the mobility sector, which is her specialty. “Everyone in the transportation industry has to think very hard about how they will fit in when autonomous vehicles hit the streets. They’re going to completely transform the economics of what it costs to bring a car to your door. So this will completely change car rental, ride hailing, buses, shuttles, taxis and parking apps.

“It’s true that there will be business models we can’t imagine in the future. But as best I can, I try to focus on the upcoming economic reality, and always think about its implications.”

Know When to Stop

If Robin Chase can leave Zipcar — which she did — then it’s fair to say anybody can leave anything. She only left her successful creation for personal and family reasons, but she’s equally clear that it’s important to turn your back on an idea that isn’t working.

“At the end of the dotcom boom there was a cohort of maybe a dozen CEOs of brand-new companies that I used to bump into on a regular basis. After a year Zipcar was the only one left standing. And I think some of those people had really dumb ideas they were completely stuck to.

“Another person who will remain nameless once told me ‘I just raised three and a half million on this idea. It’s fantastic!’ He didn’t have any idea what the revenue model would be, or where it was going. Well, they never did find a revenue model. This guy had quit his well-paid job as a lawyer and divorced his wife because he was working all the time.

“He paid a really high price to have a slow death. A slow startup death. All because he didn’t face the fact that it was a stupid idea early on.

“Learn as quickly as you can, pay attention to all the signals and execute with speed.”