Stromkind Triumphs In The Pioneers Challenge at Pioneers’17 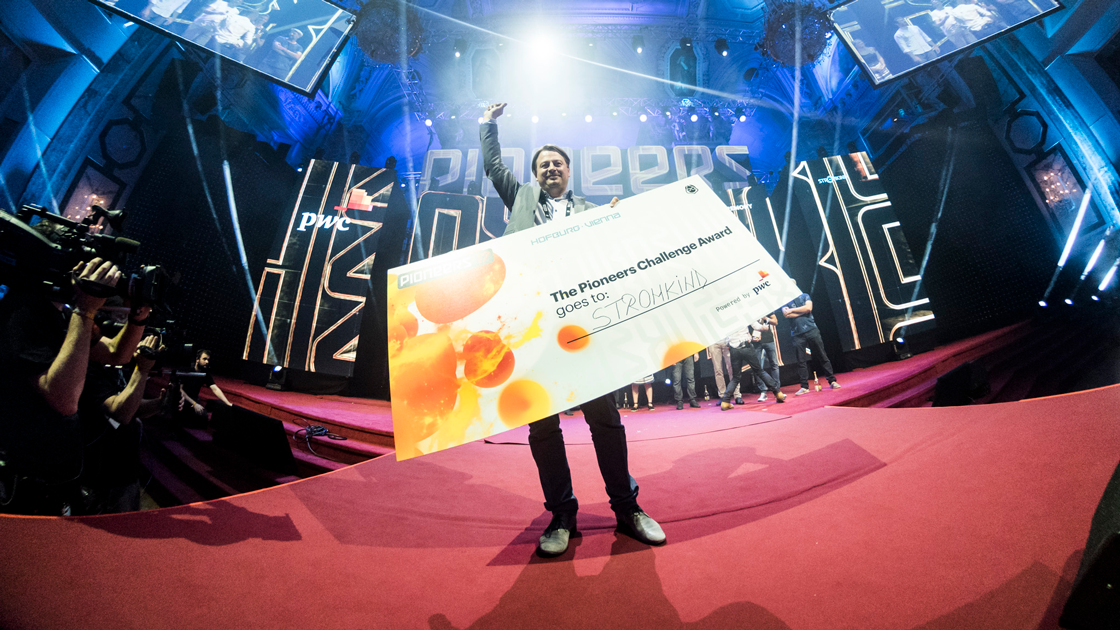 Pioneers’17 once again brought together a full house of 2,500 tech innovators from over 100 nations, including 500 selected startups and over 80 speakers, in the annual celebration of technology in Vienna’s Hofburg Palace. While the automated Pioneers Match & Meet service sparked connections and dialogues by helping to arrange 2,800 meetings over the two days, Stromkind walked away with the Pioneers Challenge powered by PwC. The maker of the KAT 300 aquatic drone also took the Best Austrian Startup award.

Victory means not only global recognition, but also a trip to San Francisco with Pioneers, during which Managing Director Andreas Desch will enjoy mentorship with legendary investor Tim Draper, communications expert Nancy Duarte and Y Combinator CEO Michael Seibel. In addition, Desch and KAT 300, which automates a number of aquatic problem-solving processes, including cleansing water of algae, will be featured on CNBC.com. CNBC will showcase the winner as part of its new digital franchise entitled The Brave Ones, a series that charts the rise of some of the world’s most successful entrepreneurs.

Stromkind beat over 4000 applicants by achieving Pioneers500 selection, and then getting chosen for the Pioneers ChallengeTop 50. Clearing the latter hurdle meant the chance to pitch yesterday, after which the company was announced as one of the eight finalists who would pitch again today.

“I didn’t believe that we were going to get into the selected 500," enthused Desch. "I really didn’t believe we’d make the Top 50. And I never imagined we’d be a finalist. To win Pioneers Challenge? That’s incredible.”

“The people we will meet in California are people we most likely would never otherwise get to meet. We want to break into the US market, but it’s not easy to go over there without some kind of backing or momentum. You need some positive vibes. With the coverage we’ll get, they might just say, ‘Ah, you are the guys from Austria – we’ve heard of you!’’

In the opening session, Atomico’s Siraj Khaliq shared his thoughts on Europe’s deep tech potential in a stage interview with Pioneers co-founder Jürgen Furian. Atomico also launched its Europe Meets China Games Report to co-incide with the first day of Pioneers’17.
“We are approaching US levels in terms of numbers of deep tech startups in Europe, with over 1000 founded since 2014,” said Khaliq. He also pointed out the importance of talent when it comes to investment potential. “Money follows talent, and that talent is spread across Europe.”

“Artificial Intelligence itself in its nature is not the driver of that,” said Hodjat when asked about possible threats to future employment. “As new technology comes in, people get left behind and they have to catch up. This momentum is increasing, and as a society we have to ask how we deal with the people who get left behind. I think the question is misplaced, if we direct it at those working on AI technology.”

Later Skype co-founder and Future of Life Institute co-founder Jaan Tallinn offered his thoughts on the ultimate long-term impact (and risks) of technology on our lives. And in the Automation & The Future of Work session, a panel of experts, including Kathryn Myronuk of Singularity University, Andrus Ansip, VP of the European Commission, former Bulgarian President Rosen Plevneliev and Dr Markus Braun of Wirecard looked ahead to what implications this rapid technological progress will have in the medium term.

“No way am I in favour of taxing robots!” said Ansip. “The aim of tax is not just to get revenue to raise salary of policement and teachers. I agree we should tax bad habits like smoking or alcohol, but taxing progress? If we slow down progress, somebody else will simply take the lead on that.”

The second day of Pioneers’17 tackled a range of cutting-edge tech. Among others, these included cyber security, biotech and sextech. The Listen to Your Body session dove into biotech, and the growing possibilities for us to diagnose our own health. Later on ‘Ethical Hacker’ Ralph Echemendia, a former security advisor to Nasa, Google and the US Marine Corps, performed live hacking into a random audience member’s phone! Virgin Galactic astronaut trainer Beth Moses spoke with passion about the dawn of the era of space tourism and what it means for humanity.

“As William Gibson said, the future is already here, but it’s just not very evenly distributed,” said Moses. “That is true, but it’s about to change. We’re at the dawn of space as a travel experience. This is a new frontier for humanity. Members of the public are going to be able to travel to space, or send goods to space, any time now. Some of those who have signed up are in their nineties. It’s going to be the journey of their lives and their souls.”

In the afternoon Adam Cheyer (the inventor of Siri) gave entrepreneurship lessons with the aid of magic – and magician Till Haunschild. And in Getting Intimate With Tech, ‘sextech’ had its moment in the spotlight, through a panel discussion featuring MysteryVibe’s Chief Pleasure Officer Stephanie Alys.

In the startup exhibition, attendees had the chance to experience tech that will change the way we live and work. Highlights included humanoid robotics from Humanizing Technologies and professional locomotion solutions for VR by Cyberith.

The broad selection of side events gave opportunities for small, curated communities to meet and discuss issues and technologies. One of the highlights was the Diversity, Inclusion & The Future panel discussion, which featured five thought leaders including Gesche Haas of Dreamers // Doers.

With this year’s flagship Pioneers event now completed, attention turns to Pioneers’18. The dates are already locked in, with the event taking place on 24-25 May next year. Seats are already available here.