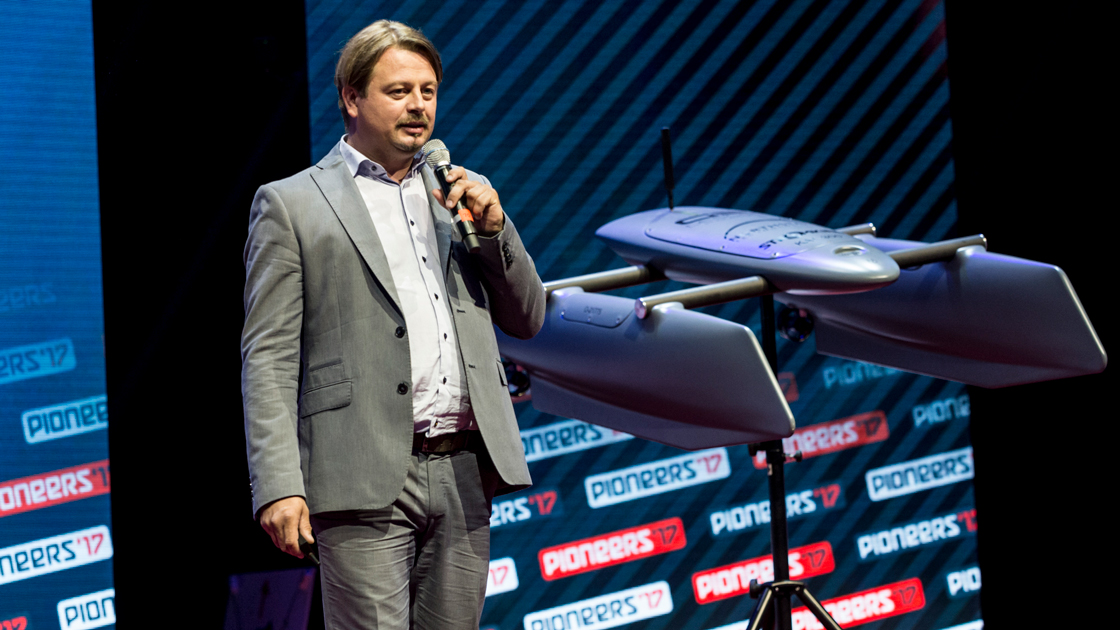 This year, at Pioneers’17, it was aquatic drone manufacturer Stromkind that struck gold. And their founder Andreas Desch was as surprised about that as anybody. But it wasn’t down to luck, says the 41-year-old father from Upper Austria. Victory for Stromkind, which focuses hard on its product and less on marketing fluff, is a reward for enormous quantities of work on a serious product for a serious market.

“We’ve worked so hard in the past year, and experienced so many ups and downs,” says Desch. “It’s been 24/7 hard work with a lot of travelling – I’ve gone through three cars! So it’s great to be up there as one of the best at last. Now we have to scale it up in quick time, before the big guys come in.”

“We were at this event two years ago but nobody really realised the scaleable hardware that we had. We realised the spirit and the possibilities here, though, and said we’d be back. That we would return and show everybody that this system is worth showing to the world. And that’s what we have done!”

Desch made full use of the opportunities extended to Pioneers Challenge Top 50 startups, using the Thursday Mentors Day to completely rework the three-minute pitch he would have to deliver the following day on the Amplify Stage.

“The input at the Mentors Day was great. Our mentor told us about what investors want to hear and how we needed to know what we want exactly to achieve and focus our pitch on one thing. It was extremely good input! So we totally changed everything overnight, working until 4am. And then, after we got through to the Pioneers Challenge Finals, we changed it tremendously again – working until 3am this time!

It wasn’t Desch’s first time on a big stage like that inside the Hofburg – he used to be a DJ! He is considerably above the typical startup founder age, but it’s hard not to read some kind of destiny into the fact that the registration number automatically assigned to KAT 300 spells out his exact birthday.

“I was pretty much the oldest guy, so that experience might have helped,” he say as he reflects on other factors that made his pitch a winner. “Also, there’s the fact that we already have revenue coming in, and we initially used a lot of our own money so far to do that.”

Still, despite the clear confidence in a product with multiple industrial applications, most notably its ability to perform automated algae removal, Desch was taken aback to end up going all the way. It’s the first time Stromkind has achieved recognition like this at a major event.

“I didn’t believe that we were going to get into Pioneers500. I really didn’t believe we’d make the Top 50. And I never imagined we’d be a finalist. To win Pioneers Challenge? That’s incredible.”

Ultimately, the genuine ability of the water drone to do something useful for the world played a key role in Stromkind going as far as it did in an event looking to showcase exactly that kind of solution. Its product is a ground-breaking one that takes drone tech to the next level. It’s active technology that offers solutions, not passive technology that presents a neat package of problems.

“You can use KAT 300 for quite a lot of applications,” Desch explains. “You have surveillance, cargo transportation, firefighting, environmental protection and of course water cleaning. The markets are huge. We aren’t just a drone that takes photos. We don’t want a passive product that just says ‘shit happens’. We try to prevent shit from happening. That’s our mission.”