Pride of Pioneers: How B2B Pay Grabbed Their Big Chance

By Sophie RabNovember 30, 2017No Comments 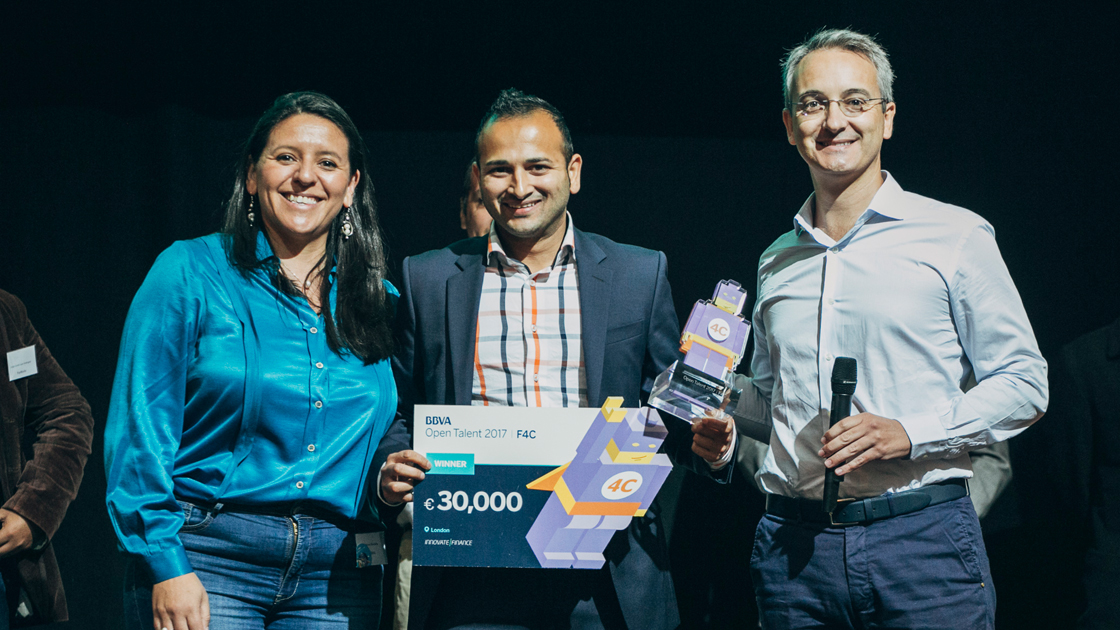 Pioneers Discover played an important scouting role for both the Fintech for Companies and Global Trends competitions, part of the diverse and international BBVA Open Talent programme. They brought their trademark efficient and result-driven, three-phased approach, which including making use of the Pioneers brand and its highly-curated top-notch network of ecosystem stakeholders to attract the right companies.

“When we got the email from Pioneers Discover,” recalls the cheerful Ambikar, “I remember having a look and thinking ‘this is interesting for us as a Fintech company!’ So I applied. And then I totally forgot about it for months, as you do!

“Then one Friday I started getting calls from Spain. But I was travelling and I ignored them – I get a lot of spam calls, you see! Towards the end of the day I finally picked up an email saying ‘hey, we’ve been trying to reach you all day, we need confirmation in the next hour if you want to come to London as a finalist…otherwise we’ll have to give the place to someone else.’”

Ambikar got in touch right away, as you might imagine. And now he’s certainly relieved to have made the trip to the English capital in September. Because after two days of learning the inner workings of the banking giant and then pitching, B2B Pay emerged as the BBVA Open Talent Fintech for Companies (F4C) winner. They saw off nine other finalists, of which two more were also scouted by Pioneers. Also in the ten were our 2017 Fintech.Pioneers finalists Bitbond.

“There were about 30-40 people from BBVA in London – top management who were taking it really seriously. And there were also really good startups! I was pretty confident that one of the others would win.”

Happily for B2B Pay, Ambikar was wrong on that. His pitch went down well. And victory in the United Kingdom was far from the end of the story. Along with €30 000 in prize money, they also won an invitation to join BBVA for an Immersion Week at the Spanish giant’s Madrid headquarters in late October. There, they joined winners from Global Trends, for which Pioneers Discover also scouted three of the finalists.

The trip to Madrid proved to be a positive experience for Ambikar. As reflected by the fact that the team is now working on a Proof of Concept for BBVA.

“I’ve been in the startup world for two or three years, and nobody has ever flown me anywhere or provided me a hotel room,” grins Ambikar. “I’m usually sleeping on couches!”

More importantly than the lodgings, B2B Pay had the chance to really learn how best they might be able to tailor their virtual bank accounts product to BBVA use cases. Unsurprisingly for a company that runs such a broad innovation programme as Open Talent programme, Ambikar and his new ideas felt very welcome at HQ.

“The vibes were really positive and the interaction very genuine and intense. You could see that BBVA is really serious about working with startups. It does a lot more with startups than most banks…most banks talk about it but BBVA actually does it! They’ve taken over a lot of startups and invested a lot of them too.

“They really showed us around everything, and it was amazing to dive so deep into how BBVA is thinking, meeting their design guys and so many other people."

While meeting the right people in a large organisation is obviously a major step for a startup in any space, they still need a good product or concept. And Ambikar is confident B2B Pay has got one that really solves both sides of a pain point, namely reducing payment fees and paperwork for small businesses who have customers in Europe’s SEPA [Single Euro Payment Area) zone, but don’t actually operate there.

“There are so many small exporters to Europe but they can’t do banking there,” explains Ambikar. “If you are a small Turkish or Indian merchant, be it e-commerce or traditional import/export, you cannot get accounts in Europe. Payments are a painful process and very expensive. PayPal is not in Turkey anymore. There is no payment solution in Europe for them. There is this entire market of customers who are underserved. We thought, how can we solve this via technology?”

The answer is a virtual SEPA account provided by B2B Pay. It’s a bit like VPN, which gives you an online identity in your country of choice without actually being there. The technology, of course, is something that might be white-labelled by a large bank. There’s a clear benefit for the institution, explains Ambikar.

“We’re creating a new market. It’s good for banks like BBVA because those big cross-border and exchange fees were probably going to another bank or broker anyway. In a way we would be creating a new revenue stream for them. Now, by taking money in Euros through us, they can make money on the FX on the payments between Europe and, say, Turkey.”

Turkey is a use case on which B2B Pay is focusing as it develops its Proof of Concept, given PayPal’s loss of licence there last year, the high number of Turkish exports to the Eurozone and the fact that BBVA owns Garanti, one of the biggest banks in Turkey.

What happens, though, if (or when…) Blockchain adoption means the international payments problem falls away industry-wide? Well, B2B Pay are thinking ahead such a large-scale infrastructure change without fear. In fact, they’re eyeing a solution that would make them a major part of it.

“What we want to do in the future is basically replace the IBAN infrastructure using Blockchain. Our concept is EBAN – an electronic bank account number. We should be able to create a global bank account number that’s not tied down to any country, not tied down to a bank. Banking should be like email – there should be no difference between domestic and international. Whether you are from Turkey or Europe should not matter.

“For me the future is to build the whole virtual account directly on the blockchain, and bypass the need for this whole stupid system of creating multiple accounts globally.”

A significant pivot has to be a possibility, then, but like any startup operating in the complex, conservative and highly regulated Fintech environment, it’s almost impossible to say when that might be necessary. Companies like B2B Pay have to watch the landscape changing and adapt when the moment is right. In the meantime, it’s about timing and fortune…and building relationships like the one they’ve started with BBVA.

“In two years of being a startup I have learned that it’s all about timing and a little bit about luck,” Ambikar reflects. “Like getting an email from Pioneers, and then a phone call from Spain on that Friday afternoon!”

Interested in getting on the Pioneers Discover radar? View the opportunities on our Open Calls page here.