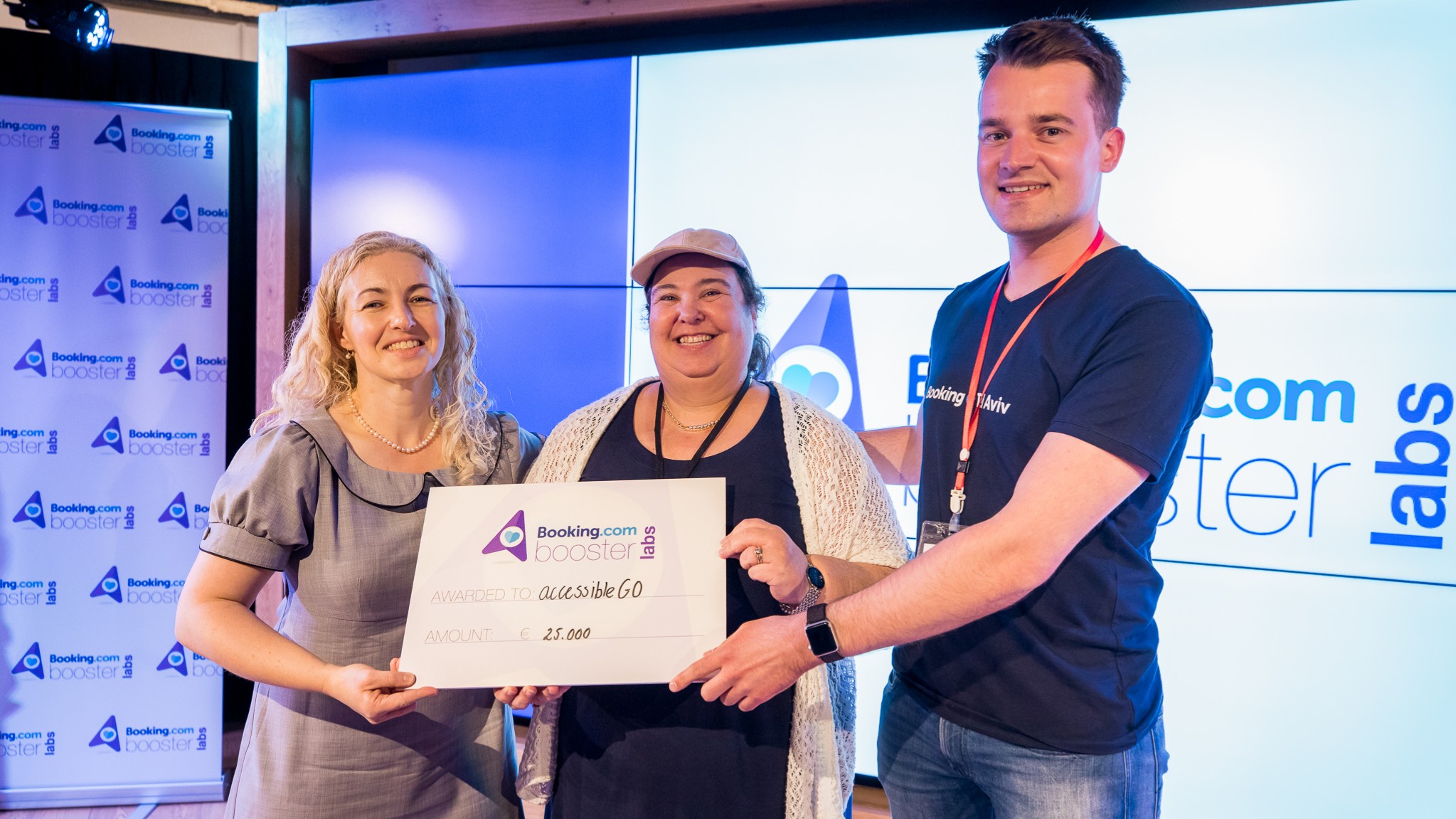 With the recent Booking.com Booster Lab in Tel Aviv having concluded on International Women’s Day, it was fitting that all-female startup accessibleGO won one of the two €25,000 grants on offer at the event, for which Pioneers Discover drove the process of startup selection as well as developed and managed the content and framework. In this piece we hear their thoughts on juggling family and founding an accessible tourism platform, and then dive deeper into the Israeli female entrepreneurship scene.

Considering that the founders of bitemojo, the other startup to win a €25,000 grant in Tel Aviv, are a husband-and-wife team, then the only three women from the ten participating startups certainly defied the odds with their success. And in Israel, as most places, women entrepreneurs are quite used to having to do so.

While the innovative energy of the ‘Startup Nation’ is certainly exceptional, the representation of women in the scene is a familiar story. Raw numbers are low, and they’re even lower when it comes to high-tech startups.

According to the Startup Nation Finder, the innovative discovery platform from Start-Up Nation Central (a tech NGO serving the Israeli innovation ecosystem), of the 4,247 founders of technology companies founded in Israel between 2014 and Q3 2017, 3,802 were male and only 445 were female. In percentage terms that’s a little over 10%. Additionally, women founders are most often seen in HealthTech, Social Media & Advertising and FinTech & E-commerce. After that, there’s a steep drop-off as you look at other industries.

In a country where, unusually, women and men are both required to take part in compulsory military service, which can often involve working in technical environments, you might expect the entrepreneurial picture to look a little more balanced than it does elsewhere. But this is also a country with one of the highest birth rates in the developed world, with a particularly high expectation to raise a family.

This pressure goes a long way to cancelling out the ‘entrepreneur DNA’ many Israeli women no doubt share with their male counterparts. But the founders of accessibleGO are both parents. With their success in building their accessible tourism platform, they have shown that motherhood need not be a barrier for female entrepreneurs. They’re in no way interested in talking about glass ceilings.

“Israel is a very family-centred country,” says Co-Founder & CEO Miriam Goldman, whose Silicon Valley background gives her a broad perspective on things. “It’s a very important part of the culture. But you can juggle. You have to figure out how to manage your schedule.

“I was pregnant when we signed our agreement. We formed our company in September and I went on maternity leave at the end of February. I was maximizing every day until I gave birth. Then I was two weeks overdue, which was great! More time for the baby to cook, but also more time for projects!”

“But after that she did take a real, proper maternity leave,” adds her co-founder Galia Kut. “Having a baby is the most amazing thing in life and I told her not to be sorry about that. We’re both efficient, driven project managers, and when it comes to maternity you have eight months of planning to get it right!”

Other Israeli female entrepreneurs are also showing that such things are no barrier. Orit Hashay, who emerged from the Orthodox Jewish community to develop automated bra recommendation platform Brayola, raised the money for the company while six months pregnant and launched it four weeks after giving birth. It’s been a huge success and she has raised several million Dollars since.

Another pioneering woman on the Israeli startup scene is Sigal Bareket. She founded mobile advertising tech company Taptica in 2012, and it’s now listed on the London Stock Exchange. Her co-founder, incidentally, is Kobi Marenko, who took part in a panel discussion at Mobility.Pioneers earlier this year.

And there are plenty more: Social Media & Advertising companies HoneyBook, Houzz and Kaltura all have female founders and have now gone past the Series C funding stage. Meanwhile HealthTech company Ornim Medical has done the same.

Things are clearly happening, albeit slowly. Much of the growth in female startup success in Israel can be attributed to the establishment of a women’s ecosystem and community. This is important even within an overall innovation culture that’s extraordinarily good at support, connection and collaboration.

One example is non-profit organization Yazamiyot. This started as a few women entrepreneurs meeting for wine in co-founder Hilla Ovil Brenner’s back garden, and has now grown to include around 3000 members. Yazamiyot has run programs such as Google Campus for Moms, a startup school for women on maternity leave, of which Goldman and Kut are alumni.

“It’s not about getting together and talking about the glass ceiling,” says Brenner. “It’s about giving women tools. Women have a passion for each other and want to help each other out. This was the need we saw and that’s why we started. We didn’t think this would be so big, but it’s working.”

As an investor herself, Brenner understands that building up the number of female entrepreneurs in Israel – or anywhere, for that matter – depends a lot on building up investor diversity. While she’s another to have convinced investors while pregnant, when she raised funding for her WhiteSmoke startup, she says more women in the room would make a difference to dealing with preconceptions around, for example, a pregnant woman’s ongoing commitment to her startup.

Right now, though, only around 14% of partners in Israeli VC firms are women.

And she’s not just talking about VC funds hiring more women investors. It’s also about successful female entrepreneurs choosing to stay involved in the ecosystem and supporting others.

The numbers from Startup Nation Finder certainly back this up. Only nine female founders have established two companies, while just one has built three. The respective male numbers are 154 and 10. But one who has been bucking the trend since 2005 is Revital Hendler, who first founded successful human resources marketplace AllJobs and then went on to launch another two international startups.

Another strong community of women is she codes, which is specifically for software engineers and thus addresses the high-tech imbalance in particular. It now numbers 10,000 members, and has the goal of seeing 50% female software developers in the high-tech industry within a decade. she codes has received a government grant to support it as it runs free events and courses all over the country – and any success it has will almost certainly have an effect in the tech entrepreneurship world.

On Tel Aviv’s prestigious Rothschild Avenue there’s a temporary exhibit dedicated the ‘glass ceiling.’ It’s a tunnel through which you can walk – as long as you’re prepared to hunch. And if you can read Hebrew, you even can take in a few interesting statistics about the topic whilst you’re doubled over. In such a prominent part of the city, it’s a clear sign that Israel is one of the countries waking up to some of its imbalances in the workplace.

But while the exhibit succeeds very well in illustrating a point, what’s far more revealing is how many women here are choosing to ignore the existence of glass ceilings – symbolic or otherwise – and take charge of their own destiny as entrepreneurs.

As one notices fairly on in Israel, everything is about moving forward and getting the next thing done. The country’s female founders are no exception to that. And while they’re still a small group, they might yet be the first such to really explode.

Are you a female founder from anywhere in the world? Pioneers would like to invite you to apply for GovTech.Pioneers on May 23rd and for Pioneers500 or its Series A program and thus earn an invitation to Pioneers’18 on May 24th-25th. The deadline is at the end of next week, on March 31st.