A Peek Inside Your GovTech.Pioneers Venue: The Vienna City Hall!

By Sophie RabDecember 18, 2018No Comments 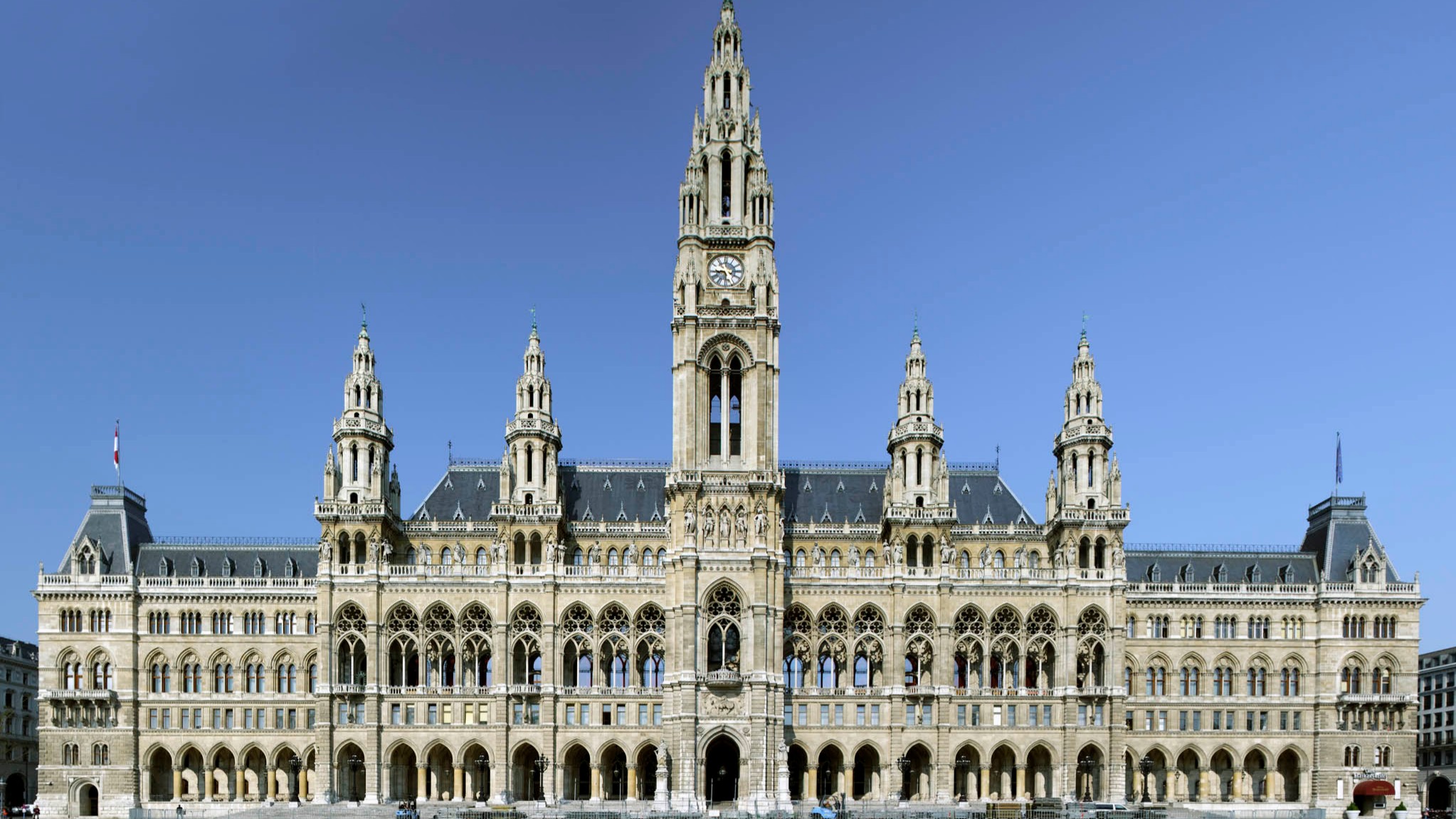 It was a cold, grey November day when a small group of Pioneers got a sneak preview of the grand and imposing venue for next year’s GovTech.Pioneers. On a brief, wind-whipped visit to the front terrace – normally off-limits to the public – we took in the wintery scene below: a light dusting of snow covered the world-famous Christmas Market and, beyond that, the Ringstraße. 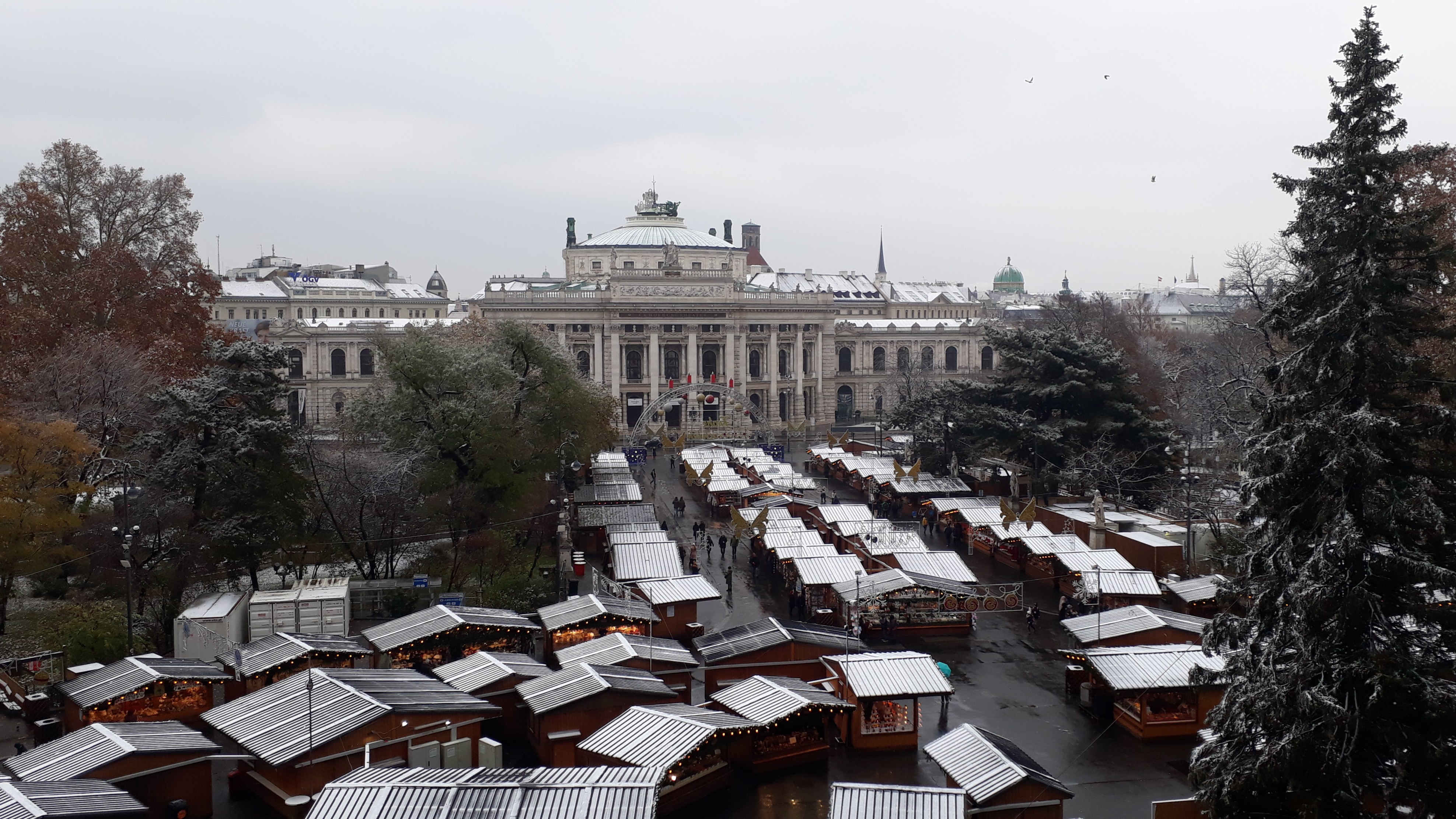 It’ll look quite different come our event on April 2nd. Snow’s not out of the question, but spring is likely to be in the air. And instead of festive treat stalls, the square in front of the City Hall will see preparations for that weekend’s Vienna City Marathon in full swing. The race finishes in front of the Burgtheater, the historic theatre that looks the City Hall square in the eye from the other side of the Ringstraße.

Whatever the season, though, the Vienna City Hall always lies at the very heart of civilian life. Not only is this eye-catching mix of Neo-Gothic and Renaissance architecture the stunning city hall to end all stunning city halls, but the square out front is almost always given over to some event for the people of Vienna, be it markets or marathons, ice-skating rinks or free film festivals.

“The centrepoint of city life, the pride and joy of all citizens of the city,” is how then-mayor Cajetan Felder described it when it was built in the 19th century. The best part of 150 years on, it has stayed largely true to that promise.

This kind of extravagant social hub is typical for a city that continues to achieve recognition as the best-run on the planet. The Vienna City Hall is far more than a fancy office for faceless, unambitious bureaucrats, but rather home to one of the world’s most forward-thinking cities.

Where are we going with all this? Well, with forward-thinking government pretty much at the heart of the GovTech.Pioneers agenda, there could be no better venue for the third edition of one of Europe’s leading Govtech events. Taking place in the stately Festsaal (ballroom), it’s entirely fitting for politicians, CIOs and innovation managers, startups, corporations and investors to come together under the theme The Next Era: Future Governments.

We’ve already confirmed a number of top-class speakers, including:

• Katy McNeil, Lead of the CivTech Intrapreneurship Programme of the Scottish Government

• Sari Ladin-Sienne, Chief Data Officer of the City and County of Los Angeles

They’ll be sharing their insights from the stage we’ll be putting up in the long, rectangular Festsaal. Directly behind the terrace from which we surveyed the city, it takes up the lion’s share of the first floor on this side of the building. With a vast surface area of 1450 square metres, it’s best-known as the venue for the annual Concordia Ball. The Festsaal can accommodate no less than 840 people seated, and even more standing.

Like the Hofburg, which plays host to our annual flagship event, the interior oozes historic and imperial inspiration. Sixteen chandeliers weighing in at 260kg each will keep an eye on proceedings from above, as will ten stern, stately statues of various historic personalities. And thick burgundy curtains come as standard – this is a ballroom after all!

Fun fact: The Festsaal is home to a Jubiläumsflügel, a grand piano from Austrian company Bösendorf. There are fewer than 10 of these on the planet – don’t ask how much it’s worth! 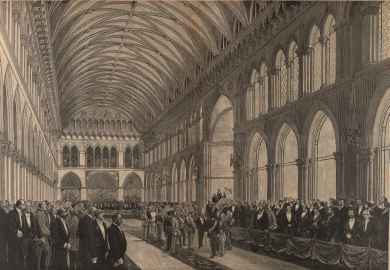 As the centrepiece of the City Hall, the Festsaal is as old as the building itself. This was built between 1872 and 1883, in which year Emperor Franz Josef laid the last stone on September 12th (above). The man behind it all was Friedrich Schmidt, a German-born architect who won a public competition for the best design. With a bit of imagination we might compare Schmidt to some of the startups pitching their Govtech ideas at our event…he hoped to sell an ambitious idea to local government, and succeeded! Founders wanting to visit Schmidt for inspiration might want to stop his statue on the square behind our venue.

The Vienna City Hall is well-known for its mighty central tower, which soars to 103 metres. It wasn’t originally the highest in Vienna, until the Rathausmann was added at the top, allowing the building to out-soar the nearby Votivkirche. His appearance at the pinnacle added another 5,4 metres and a dash of Viennese humour. The 650kg fellow’s comical shoes, if you’re wondering, are a size 63.

But though Vienna’s city leaders – notably long-serving Mayor Michael Häupl, who retired in May 2018 after a 24-year term – have never been shy of a joke, there’s always a time and a place to get serious in the Vienna City Hall. This naturally includes the day of insights, pitching and networking that’ll go on at GovTech.Pioneers!

Want to join us in the Vienna City Hall Festsaal on April 2? Grab your tickets here! Startups interested in pitching can apply here.