Kicking And Screaming: The 2018 PioGames Story

By Sophie RabDecember 20, 2018No Comments 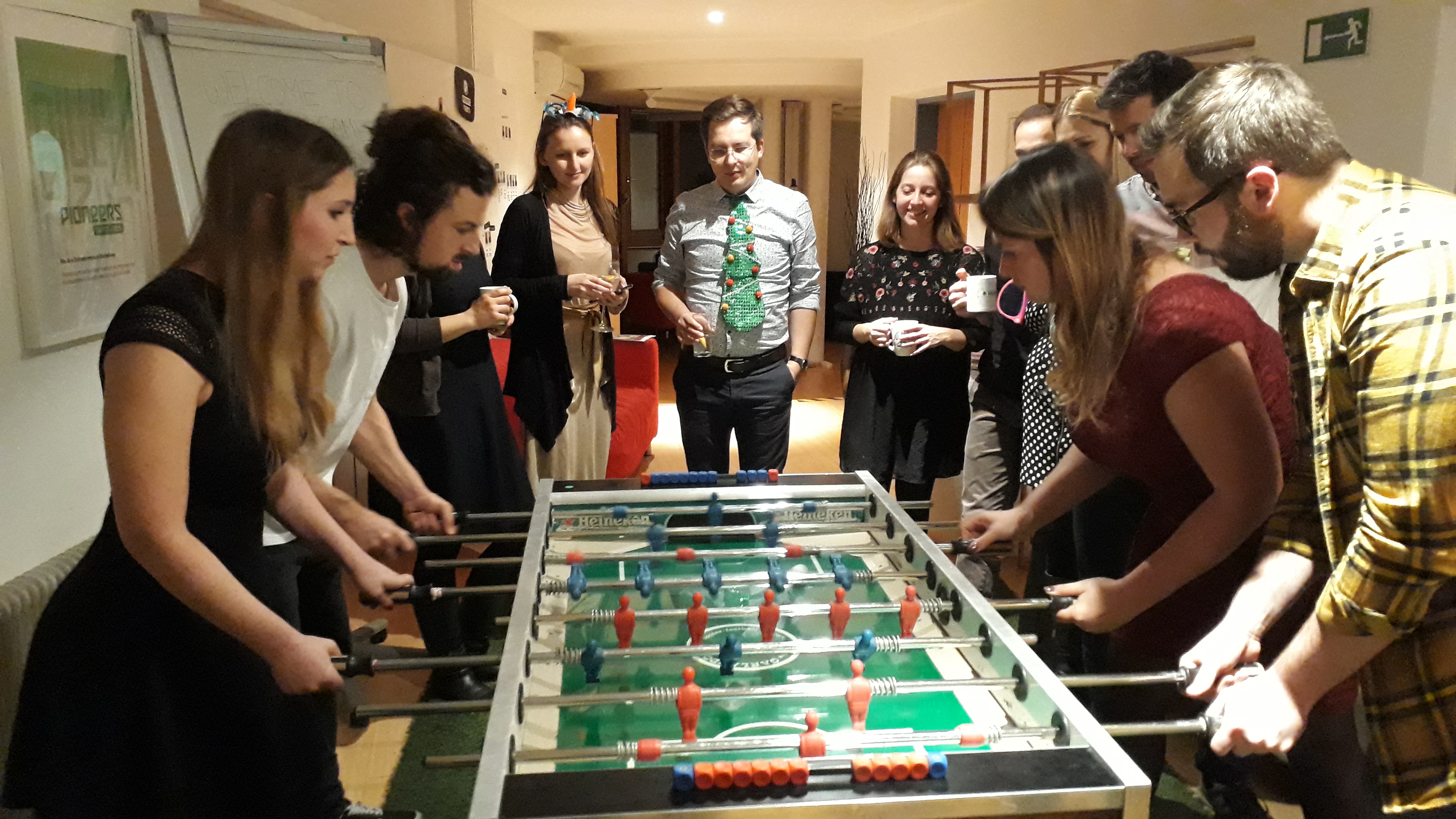 It may not come as a complete surprise to learn that at Pioneers we have table soccer (aka Foozball, aka Wuzzeln) facilities in our office. After all, we were a tiny startup only a few years ago, and this was obligatory furniture. But though we’ve grown, we’ve never lost our youthful spirit. And to this day, we remain firm believers in taking regular screen breaks.

Still, when it came to table soccer, things were pretty ad hoc until recently. You grabbed a colleague or two and you played. No structure, no trophies. And endless succession of friendlies.

But that all changed this December, when everybody at Pioneers got both creative and nostalgic during our last month at Palais Eschenbach. We’ve been based in this historic building for the bulk of our existence. It may have a drafty entrance hallway and we might have had more than our share of employees get stuck in the cranky old elevator, but you accept a few quirks when you work in a building that’s almost 150 years old and which was opened by Emperor Franz Josef I. It’s not every office where you can reach out of the windows and touch statues that keep solemn watch over one of Europe’s most treasured city centers.

Thinking we wouldn’t be able to take our soccer table to our new base across town, our digital guru Emil and Pioneers Discover consultant Michael took the initiative of organizing the first-ever (as far as available documentation suggests, anyway) PioGames table soccer tournament. With loosely-seeded teams playing in pairs, a fixture list, a league table, media representation and everything else you’d expect from a major international tournament (FIFA have already been in touch for tips on planning Qatar 2022), the intensity shot up several notches. Lunchtimes in December were a cacophony of rattles, shrieks, high-fives and hugs. Turns out there’s nothing like an own goal to bring out the passion in your colleagues.

The fact that actually completing all the fixtures according to plan was a challenge didn’t matter all that much. With business trips, meetings, Skype calls and early holiday departures all meddling with the schedule, it was hard to get four people to the table at the same time. Sometimes, even if your sales queen partner was in the office, she might have to be dragged away from finalizing Mobility.Pioneers sponsorship deals in order to play. (But the kicking and screaming only started when we actually got you into the game, isn’t that so, Izabella?)

Only by indulging in a bit of partner-swapping were we able to complete (in a manner of speaking) the group phase during the allotted two weeks.

For example, Discover’s hard-grafting air-miles collector Harald spent most of the first-round fortnight buzzing around Europe organizing hackathons, leaving his partner Sarah having to borrow a partner in Parnerships Coordinator (well, it’s in the job title!) Barbara for the first game. The trio then mixed it up when Harald returned to take part in four of their five group fixtures on the final Friday – and promptly qualified for the semi-finals!

But by the time the round-robin semi-final phase came around in the final working week of the year, player availability issues worsened. Emil’s partner Verena (shockingly) couldn’t be convinced to cancel the first part of her Christmas holidays in order to challenge for victory, and he had to call in the help of another Discover member, Max, to take her place.

Despite the very best of efforts being made during our Christmas party (which saw us run amok in our grand old office one last time), the semi-finals only ever got semi-finished. For the record, the teams to make the last quartet were Emil/Verena/Max, Sarah/Barbara/Harald, Alex/Reka and Anna/Michael. (In the top picture you can see Sarah and Harald taking on Reka and Alex, with Grand Referee Emil watching on in seasonal attire.)

In the end, during the pizza-fueled lunchtime following the party, the ever-philosophical Emil announced that the tournament committee had reached an executive decision to give out prizes without a final having been played. But anyone who witnessed Alex’s intensity as he watched the ball ping around the table, or felt the vibrations as the Discover Consultant shared a high-five with our Program Director Reka would agree that they were a worthy choice as overall winners of the main award for Most Motivated Team (below). The vigour with which the Austrian duo scheduled (and hunted down the opposition to play) their matches may also have proved a telling factor, even if it did nothing for stereotypes about Teutonic punctuality. 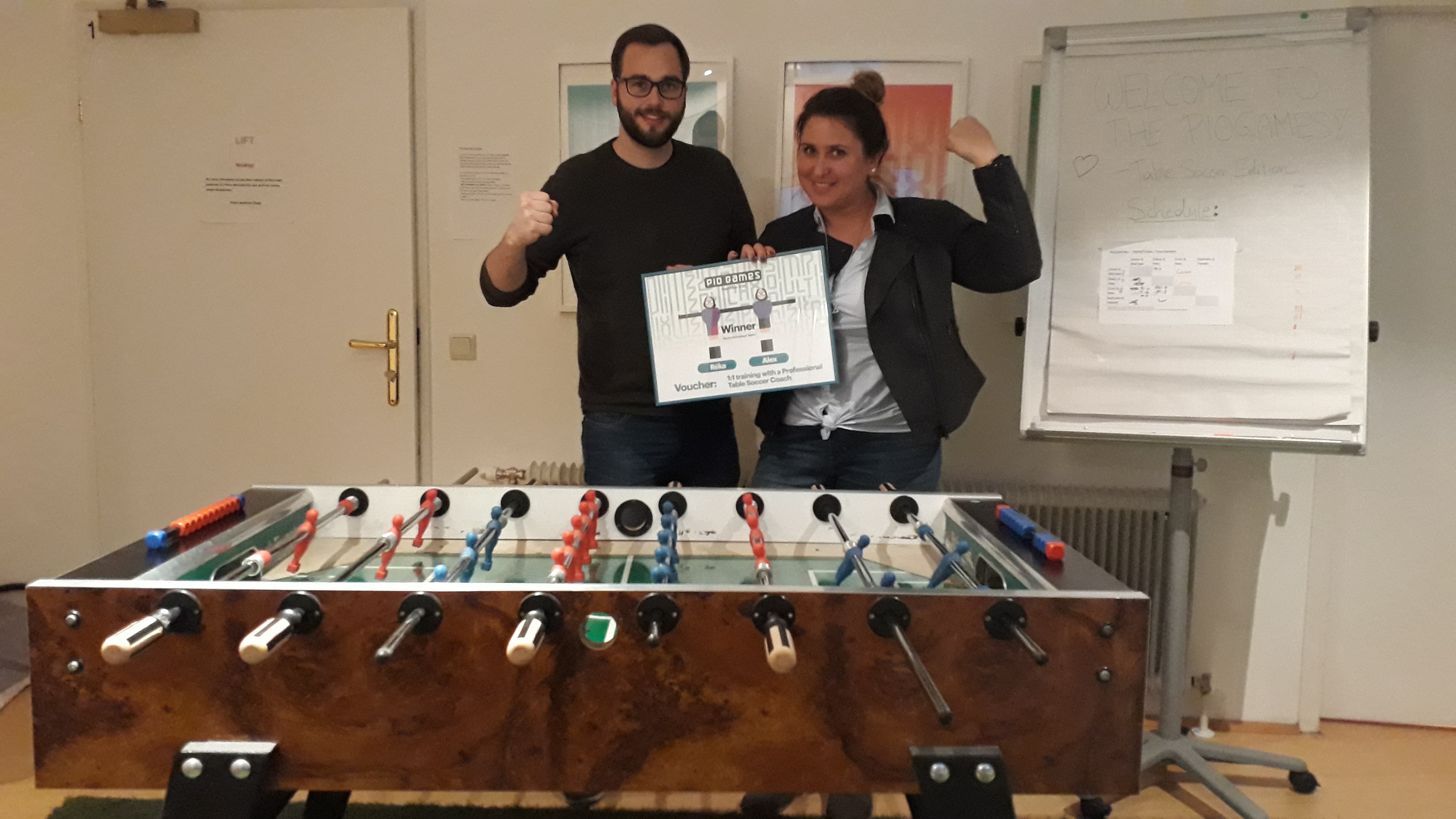 And while the presence of members of the organizing committee (below) in the remaining awards may have given rise to a certain level of spirited discussion, nobody could really dispute that Michael and our Digital Marketing Manager Anna were a suitably lanky pair to grab the Tallest Team prize. And, having survived the choppy waters of a mid-campaign change of personnel, that Emil/Verena/Max thoroughly deserved their Best Pivoting Team award. Both teams did, after all, complete all their games and make it to the semi-finals. 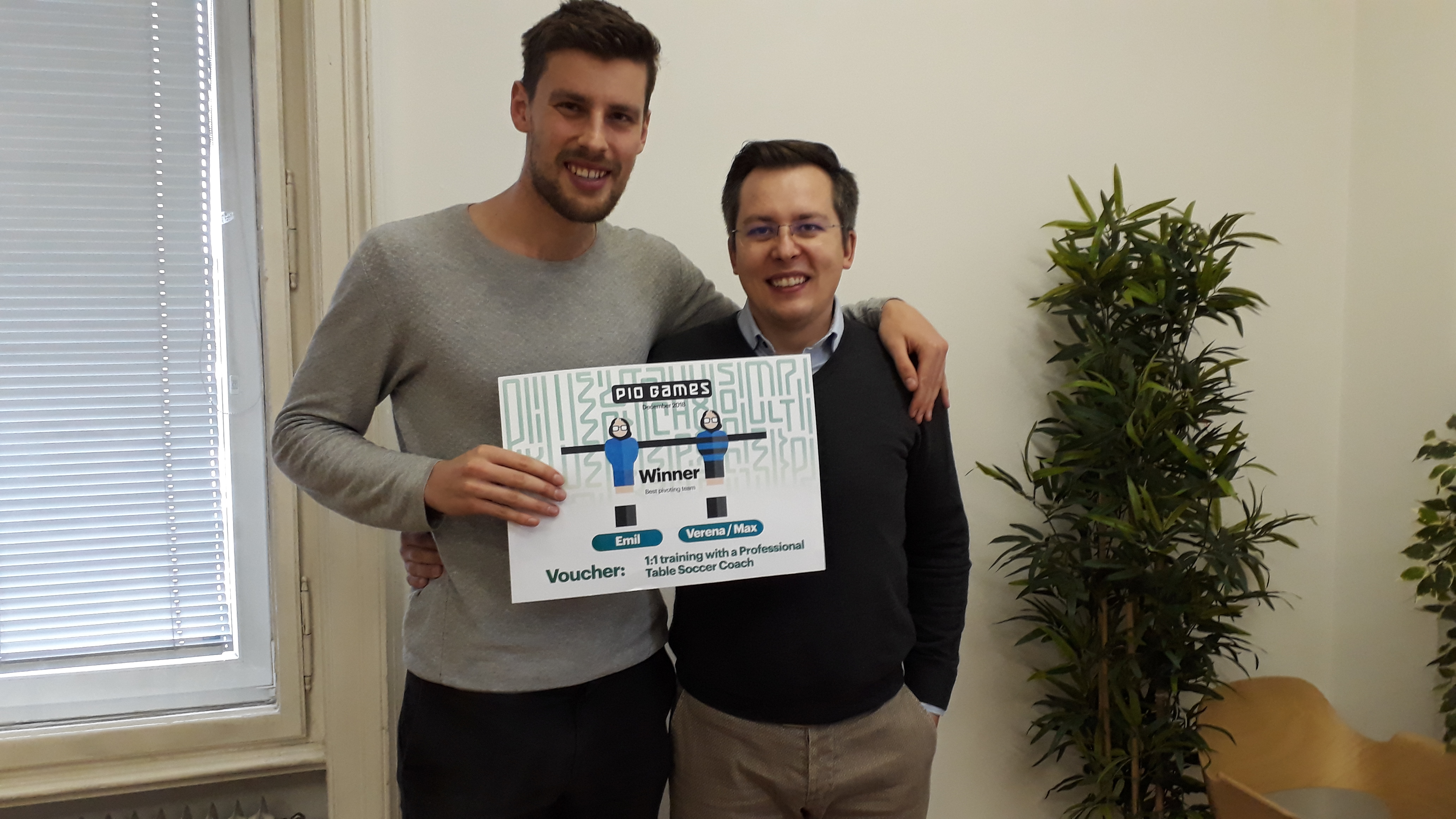 "I think it was our shared love of scoring brutal victories that made us a fine team." commented Alex after the awards announcement, which was covered by the international (or should that be internal?) press. "We were the perfect symbiosis – like one person with four hands! This is truly my best moment since joining Pioneers." 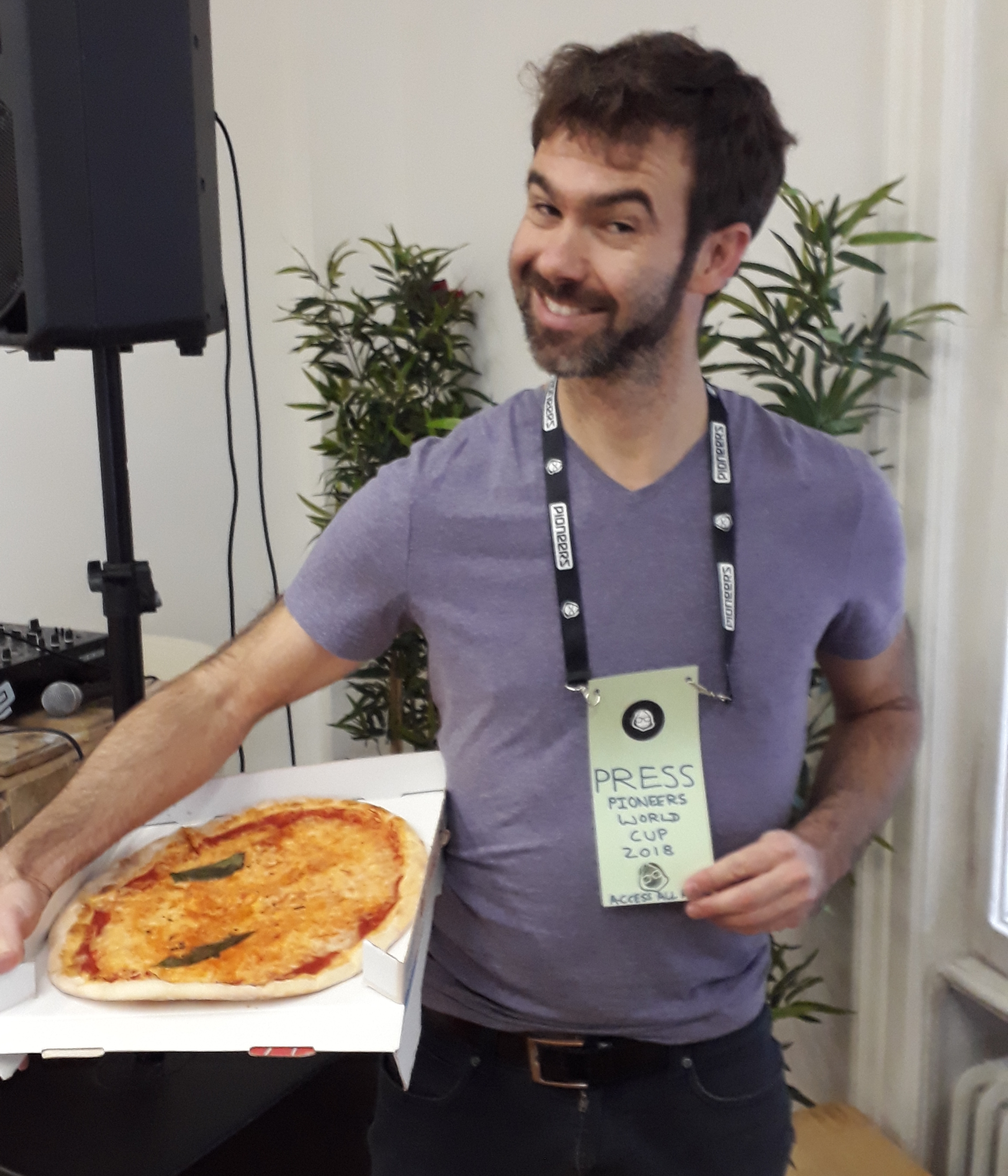 Same old story: sport journalists only come to fill up on free food!

But the really good news? While we must turn our backs on Palais Eschenbach, our table has won a reprieve. It would be madness to leave a team-builder like that out of your portfolio. So we’ll be taking it to our new office after all. Wonder who’ll score the first own goal on our new premises…?