By Sophie RabFebruary 20, 2019No Comments 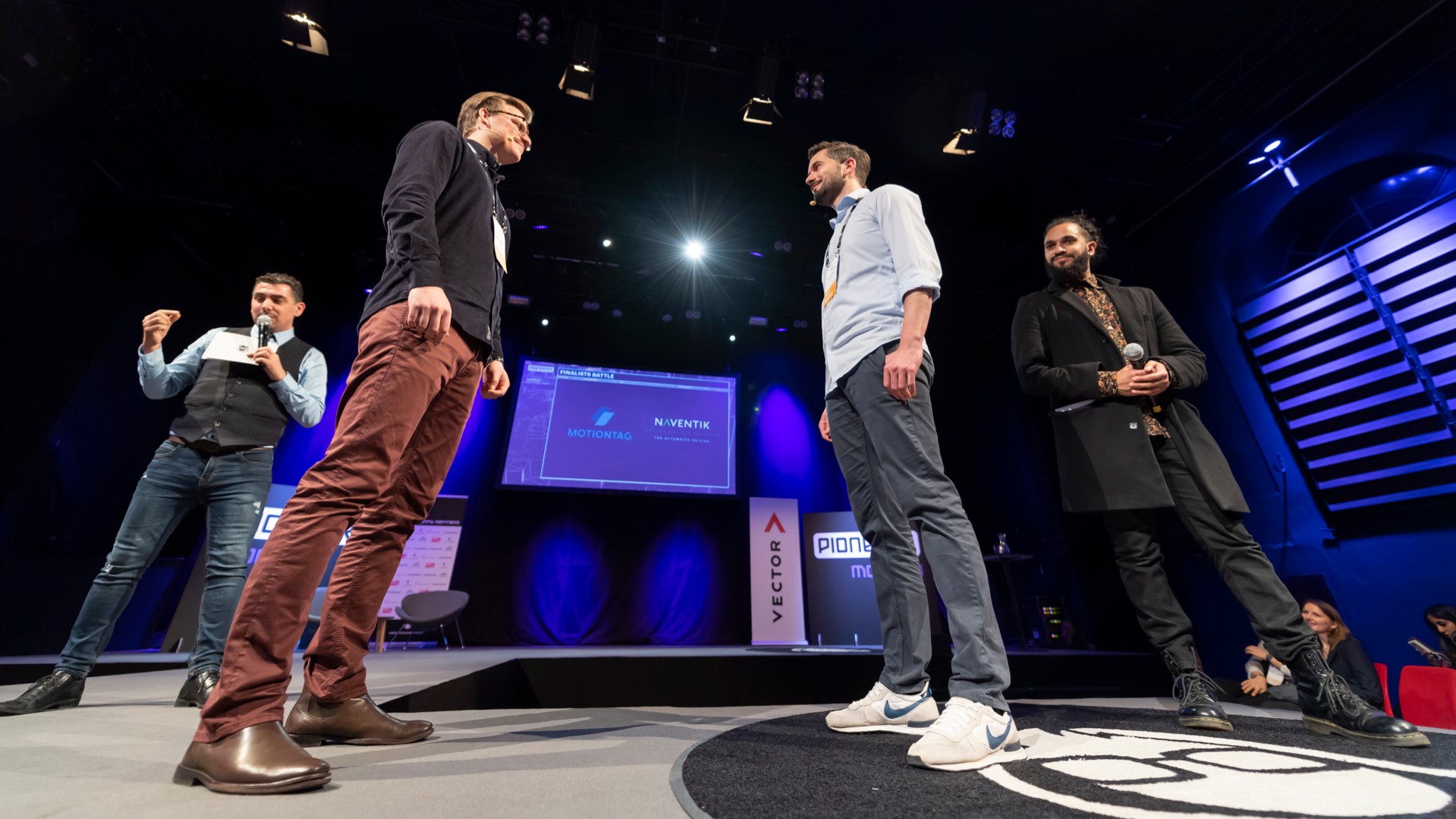 The world of startup events is strewn with so many pitching contests that you wouldn’t blame founders for getting bored by the doing the same thing over and over. Well, the last thing we want to see at Pioneers is bored founders! It’s one reason we decided to offer pitching startups a different challenge at Mobility.Pioneers, which took place in Munich on February 7th.

The major innovation came in the final round, contested by German startups MOTIONTAG and NAVENTIK. Instead of delivering yet another three-minute pitch, they were asked (figuratively speaking) to tear up their scripts. The ultimate winner would be decided by their response to questions and challenges from the jury.

It wasn’t easy for Fabien Sauthier (MOTIONTAG) and Peter Kalinowski (NAVENTIK). They were asked to sum up their (rather complex) offerings in a single sentence. They had to reflect on what went wrong in a hypothetical future bankruptcy scenario. And, in the biggest surprise of all for the men on stage, the jury even asked them to sum up why the other startup should win.

But even though one of them had to lose, both said they enjoyed the new challenge.

“What I really liked about the final was that you had to know what your company is good in or not good in,” said Sauthier. “You can’t prepare that much, so it was more spontaneous, genuine and real.

“It put less emphasis on coming up with something you just learn by heart. I don’t like by-heart stuff, even when studying! So for me it was nicer to have someone ask me questions and I answer them the best I can. It’s a challenge but it’s a nice one.”

Kalinowski was equally positive, despite getting edged in the finalist battle.

“I did a lot of startup events but I’ve never had something like that. It’s absolutely heads-up so everyone has the same chance. You can’t practice for it or go through it 100 times. But it was a very good final format – it was clever.”

With such a positive reaction from the startups, it’s safe to hint that we’ll see a variation of this at our events going forward.

The same goes for the more subtle tweak we made to the first-round pitching. Here the startups still got the traditional three minutes to speak – but only if one of the jury members hit a buzzer during the first 99 seconds. If they didn’t grab the jury in that time, then they were done.

Needless to say, the finalists didn’t get cut short in their first-round pitches. The jury of industry specialists saw the potential for their tech, even though the B2B software solutions they provide are notoriously difficult to explain succinctly on stage.

It’s not a lot easier to convey in an article, either. But since (thankfully) we don’t have to do it in one sentence like the two finalists did, we’ll have a stab at it before rounding off this piece.

Winning startup MOTIONTAG offers software that generates the most accurate mobility data out there. This ‘mobility intelligence’ comes from a mix of the built-in sensors found in mobile devices and timetable/route information.

While plenty of software can build a picture of where you’ve been, MOTIONTAG can also figure out which subway train you took. This competitive edge even works in real time. When you’re on bus 33B, basic systems see you as no more than a passive blue blob. MOTIONTAG knows where you’re likely to end up, and when.

So who wants this next-level travel data, and why would we travellers let them grab it from our phones? MOTIONTAG sees its primary customers as public transport providers. For them, it could be the basis for next-level, customer-centered services. Without such accurate real-time (and historical) data, they can forget about offering demand-driven public transport. Also, think seamless, multimodal travel. Think ticketless travel.

The startup is keeping an open mind, and may doubtless encounter use cases it hasn’t thought of yet. But working with the ‘good guys’ such as public service organizations and cities will remain central to their philosophy – stalkers and spies need not apply!

NAVENTIK also brings next-level accuracy to the mobility space, but instead of focusing on public transport usage, it makes satellite positioning (GNSS systems, if you’re in that line of work) accurate enough help enable autonomous driving.

Think about all those times you’ve used a navigation system and it’s been a few metres out. Is it this left turn or the next one? You wait for it to catch up, and bang, you’ve missed your turn! Small inaccuracies like that are hardly a disaster with a human driver (unless you’re in Milan, in which case you’re trapped forever in a vortex of one-way roads), but clearly unworkable for autonomous systems. The overall interpretation of a vehicle’s position will need accuracy to the centimetre, otherwise everything will be crashing into everything else.

That position interpretation is a complex puzzle known to specialists as sensor data fusion.

Kalinowski explains that current GNSS receiver chips aren’t providing accurate enough information to that puzzle – they get thrown too easily by error sources like buildings. NAVENTIK replaces these sensors with PATHFINDER, a software solution that would be integrated into the car’s GPU (graphics processing unit). This software figures out the impact of errors in real time, which means information from the GNSS should no longer throw the sensor data fusion out of whack.

All of which means, we hope, that autonomous driving can happen just that little bit sooner!

Our next champion startups will be crowned at GovTech.Pioneers (April 2nd) and Pioneers ’19 (May 9th-10th), both taking place in Vienna. Tickets and startup applications via our events page!