By Sophie RabDecember 28, 2017No Comments 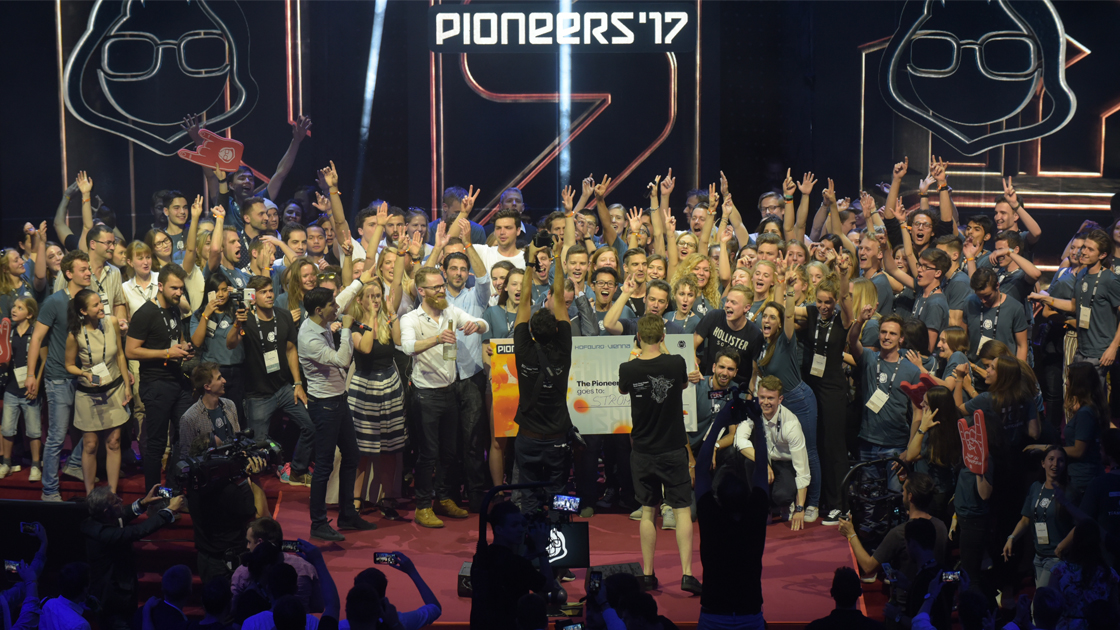 With three industry-focused events and another excellent edition of our flagship event behind us – the latter honoured as Best Conference/Congress in 2017 at the beaworld Awards – it’s fair to say 2017 has been the busiest year yet for Pioneers. The action began with Mobility.Pioneers in Munich in February (the second edition of which is just a few weeks away now on February 8th 2018), after which we moved our roadshow to Berlin for Fintech.Pioneers later in the same month. Then in October we were to be found in Amsterdam, where Health.Pioneers, the third of our specialist events, took place.

In between all that, though, came our biggest event of the year: Pioneers’17 at the Hofburg in Vienna. As usual, we chose a select 50 of the invited Pioneers500 startups for the chance to pitch on the Amplify stage. While Stromkind was the one that went all the way to glory on the final day, winning themselves a networking trip to Silicon Valley, an incredible variety of their Top 50 companions have also had plenty to celebrate in the second half of the year.

Take for example Sunflower Labs. Three months after pitching at the Hofburg they announced a strategic partnership with Stanley Black & Decker to work together on new and innovative security solutions. The Zurich-based creators of smart, drone-based lighting and camera systems for the home also brought their funding up to $6m after a round from General Catalyst, which included investment by Stanley Ventures.

Having already won our pitching contest at Fintech.Pioneers, Blockchain payments startup Bitwala was another to make the Top 50 at Pioneers’17. The next month they raised €1,6m and they’re now looking to complete another round of funding early in the new year.

Underlining just how many completely different types of startup can make our Top 50 and succeed, the smartphone-controlled herb and food growth ‘mini fridge’ known as LEAF earned $2,5m in funding in August. Proof, too, that there’s every chance for an American startup to succeed when they make the trip to join us in Vienna!

Surematics is another of our Top 50 startups that had a great second half to the year. Their technology, which helps commercial insurance brokers structure complicated deals for cases such as oil rigs, using ‘a dash of blockchain’, got them accepted to Y Combinator. That brought them a $120,000 funding boost, and following that success, they were acquired by cryptocurrency platform Radix DLT.

And since pitching in Vienna, intelligent network tracking analysis startup GREYCORTEX celebrated signing a collaboration agreement with the ESET Technology Alliance. That’s allowed it to scale sales internationally, opening offices in Poland and Japan. Having also released several new features for its MENDEL product, it’s growing sales to government and enterprise customers – look out for news of an interesting technical partnership in Q2 next year. Finally, its CEO Petr Chaloupka was also named on the New Europe 100 list in November.

Meanwhile Iris.ai, which semi-automates the process of accurately finding relevant scientific research literature for given use cases, ended a year of fast growth by announcing a $2m seed round earlier this month. Having doubled its revenue every quarter this year, the startup was named among the Most Innovative Companies of 2017 in a selection by Fast Company magazine.

There was also success for Top 50 startups from the life sciences. Oculyze, which offers a ‘mobile microscope’ with the aim of simplifying microscopy, was accepted into the Merck Accelerator Programme in September. And biology data analytics startup Genialis also had reason to celebrate in the weeks following Pioneers’17. They announced a partnership with Swift Biosciences in October, with the Slovenian company played a key part in delivering the Swift Accel-Amplicon Custom NGS Panels intuitive analysis software.

In October one of our mobility startups from the Top 50 also had cause for cheer. That month saw the announcement that Commsignia would work with listed corporate Spirent Communications in order to guarantee full compliance with OmniAir Consortium standards for certifying V2X devices.

And then there was Zylia, the genuinely innovative portable audio recording technology startup hailing from Poznan in Poland. Using the Indiegogo route to crowdfund their product launch, they overfunded to 233% of their target in October.

In other highlights for Pioneers, our young investment arm Pioneers Ventures celebrated its first exit following the acquisition of Atmosplay. This year also saw its portfolio company Gustav accepted into the Y Combinator accelerator.

For those startups interested in celebrating success stories this time next year, the road to Pioneers Challenge Top 50 in 2018 begins with an application for Pioneers 500. And startups can already do so here.