By Sophie RabFebruary 13, 2018No Comments 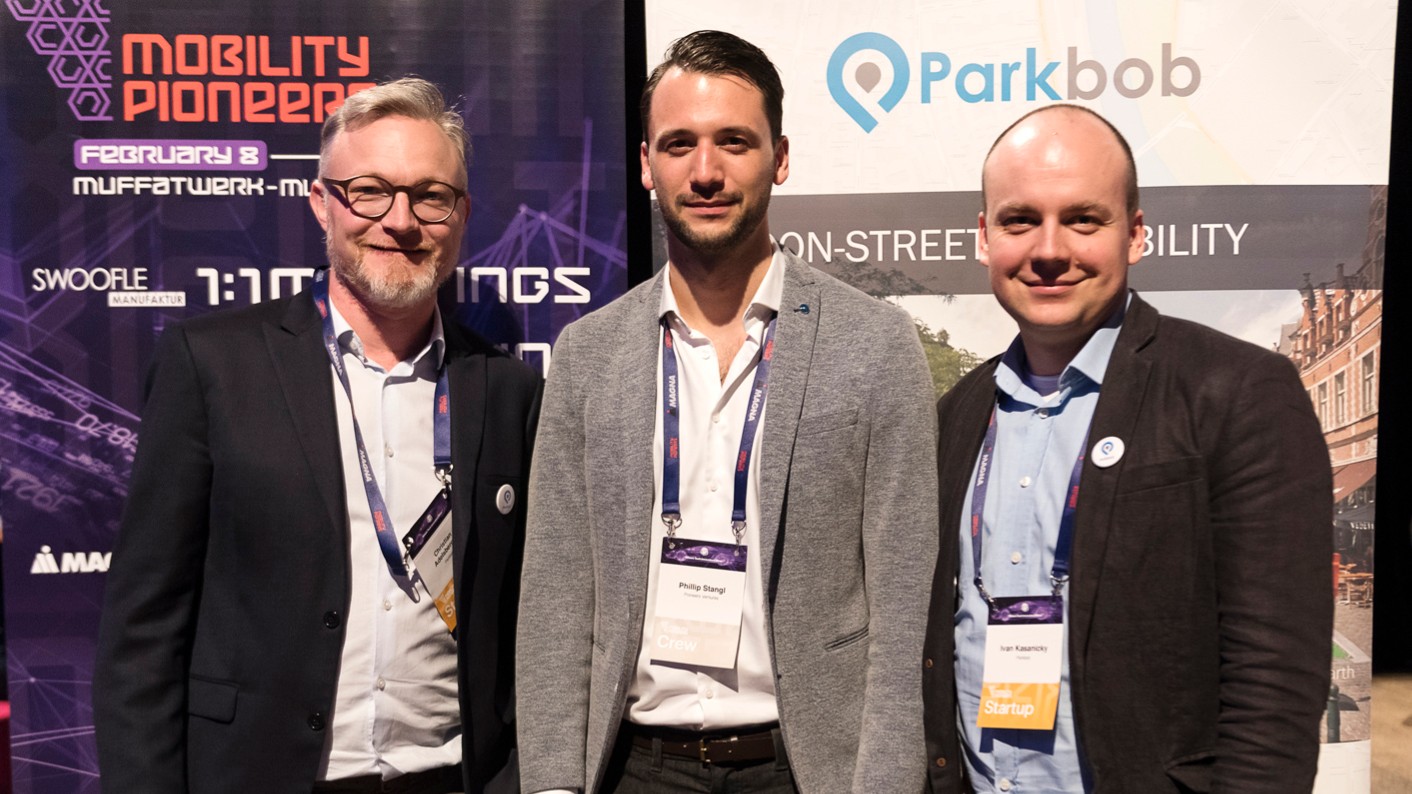 Almost every motorist has been there: you’re driving around in circles, looking for a parking spot. You begin to despair, wondering if your journey will ever end. Then your desperation turns to anger, because it shouldn’t be this way.

It was one such experience that led Christian Adelsberger to try and make things better. It was a Sunday evening in Vienna: never the best time to look for a parking spot. He’d just driven four hours from Zagreb, had a screaming baby in the back of the car, and it was a hot night into the bargain. But the biggest challenge of his trip came now, right at the end: he had to spend another 40 minutes driving laps around the packed streets of the Austrian capital, looking for somewhere, anywhere, to leave his vehicle.

“At the moment, the navigation process is broken,” said Adelsberger when we caught up with him at Mobility.Pioneers. “The navigation systems tell you that you’ve reached your destination, but what then? Do you just leave your car in the middle of the street? You still have to take a lot of decisions about parking. What’s available? Am I allowed to park there? All those questions are currently not supported in a digital way.”

With this in mind, Adelsberger founded Parkbob in 2015. Since then, the company has been making strides on solving exactly that problem – starting in that self-same city, Vienna. And in early 2016 Pioneers Ventures joined the story, investing in what was only its second startup with a €250,000 deal, having first made contact with Parkbob at our flagship event.

Adelsberger says his ongoing relationship with Pioneers has been key to Parkbob’s impressive rate of growth, which has seen its footprint shoot up to 32 cities – first in Europe, but more recently in the United States, with Portland and Seattle having just joined the list. Over the last two years Parkbob has seen its employee base rise from “one and a half” to a current count of 20. Unusually for a tech company, the majority of these are women.

In addition to attending our flagship event every year since 2015, and each of the Mobility.Pioneers events staged thus far, the company attended Pioneers Asia in March 2016, where they were among the winners of the 90 Seconds Pitch contest. They also joined the Pioneers Ventures portfolio companies on the annual networking trip to Silicon Valley in 2016 and 2017.

“We were always looking for venture partners who could help us on a strategic level, networking in the industry and taking us forward. I thought Pioneers Ventures might be a good match. What’s different from working with any other type of VC investor is that you get the full support of the organisation and the fantastic network. This has enabled us to meet companies and people we wouldn’t otherwise have access to.

“Markus Lang and Philipp Stangl [the Pioneers Ventures Managing Directors] are from the startup scene and they know how founders tick. That works very well: Ventures can push you and pull you at the same time.”

So what’s the business model that’s proving so successful in making that last mile easier? Parkbob leverages existing real-time information from partners such as parking payment and navigation services, so it can form a digital picture of free spots available at any given time. Having fully digitized the rules and regulations for each city in which it operates – something Adelsberger describes as a primary USP – Parkbob can then guide drivers directly to a spot that’s both legitimate and available.

Rather than focus primarily on a consumer app, the idea is more to integrate this service for white-label partners such as from manufacturers and ride-sharing services. Parkbob underlies improved navigation systems that won’t just take you to the address you’re looking for and abandon you in the middle of the street (and then yelling at you to make u-turns the moment you move on and start to look for parking), but which will rather take you straight to the nearest available spot where you can actually leave your car.

“We don’t monetize consumers directly but see our role as main players in this ecosystem. We do work with the large organisations in this ecosystem: the OEM’s, the big Tier 1’s. We’re proud to be official suppliers to BMW and working with Porsche Austria, and have a partnership with Car2Go.

“We in a position to help the big players in the car sharing industry to avoid parking fines. They’re in competition with the Ubers and Lyfts of the world, of course, who don’t have a parking problem.”

What’s next for Parkbob, other than growing these partnerships and expanding to over 100 cities around the world by the end of the year? There is, of course, the anticipated driverless future mobility landscape to think about. It seems likely that Parkbob can find its niche there too.

“Driverless technology is a question of timing. On street parking will still play a role because there’s not enough off-street capacity for all the driverless cars that might come. Yes, it will all be fully digitized, but we’re the first company digitizing all the rules with technologies that are fully scalable.

“We believe this business case is viable for the next 10-20 years. But the adaptability of startups is super high, so who knows what we will do in five years?”

"Pioneers can help startups in many different areas, but it takes a strong founder to actually make best use of the resources and achieve something great with them," says Stangl. "Christian is just such a founder and that’s why Parkbob and Pioneers Ventures are such a winning combination. We’re impressed with what’s been achieved since we invested and we’re happy that Pioneers has been able to add such real value."

As a final takeaway, let’s reflect back on Adelsberger’s words from two years ago, when we first invested in Parkbob.

“We’ve talked to hundreds of drivers on how to improve their daily parking experience. We’re convinced that we will be able to solve the hassles of on-street parking once and for all," he said back then. And judging by the phenomenal growth of the startup, it’s hard to argue that they aren’t well on their way to doing exactly that.

Whether you’re the next big thing in the startup world, another eagle-eyed investor or a corporate hunting down the partnership that defines your future, you need to be at our flagship event too! Get tickets for Pioneers’18 here or apply for free startup access here.