By Sophie RabFebruary 26, 2018No Comments

We all know that a successful startup needs a real problem to solve. When you consider that Deep Vein Thrombosis (DVT) can and does kill, making its diagnosis cheaper, easier and more accessible certainly qualifies as a worthy problem to solve. And the fact that the founders found it by accident is neither here nor there.

“We spoke to a lot of doctors and accidentally stumbled on DVT as a problem,” admits the company’s co-founder and CEO Fouad Al-Noor. “We didn’t really understand that it was such a huge issue until we kept digging deeper into the problem.”

What Al-Noor and his co-founder Sven Mischkewitz, who met at an accelerator in London in September 2016, discovered was this: DVT diagnosis continues to present major challenges to doctors and hospitals. Central to the problem is that DVT symptoms – pains in the leg – don’t inevitably mean a patient has this rather serious condition. But medical professionals can’t take chances, of course, which means many unaffected patients are sent for costly ultrasound scans – typically in overstretched emergency departments. At the same time as that unnecessary waste of resources, many patients in real need go undiagnosed – a mistake that can prove deadly.

What makes the diagnosis problem all the more exciting to solve is that the actual treatment of DVT is a straightforward procedure. Making diagnosis easier, in other words, is the essential step towards saving lives.

“With DVT the problem is diagnostics and not the treatment, which is a widely available anticoagulant blood thinner,” explains Al-Noor. “Doctors aren’t worried about treatment. They’re worried about catching the patients before they die.

“And the main reason people die is when diagnosis is unavailable or difficult to do. Traditionally you need a radiologist with a massive ultrasound machine costing around €100,000 to accurately diagnose it.”

But what if a family doctor could accurately diagnose their patients right there in their own surgery, without needing any special radiology skills or large, confounding equipment? This is exactly where ThinkSono comes in. Now that hand-held ultrasound machines have come onto the market – and quite possibly into your local surgery – the startup has built the software that can give general practitioners wielding such devices a quick yes or no on the DVT question.

“We can replicate the radiologist with our software and a small hand-held scanner,” he says of the tech, which uses machine learning to train ThinkSono’s core algorithm to recognize DVT from the ultrasound images. “In 15 minutes you can diagnose someone with DVT. And a GP can do it: you do not need a professional radiologist.” 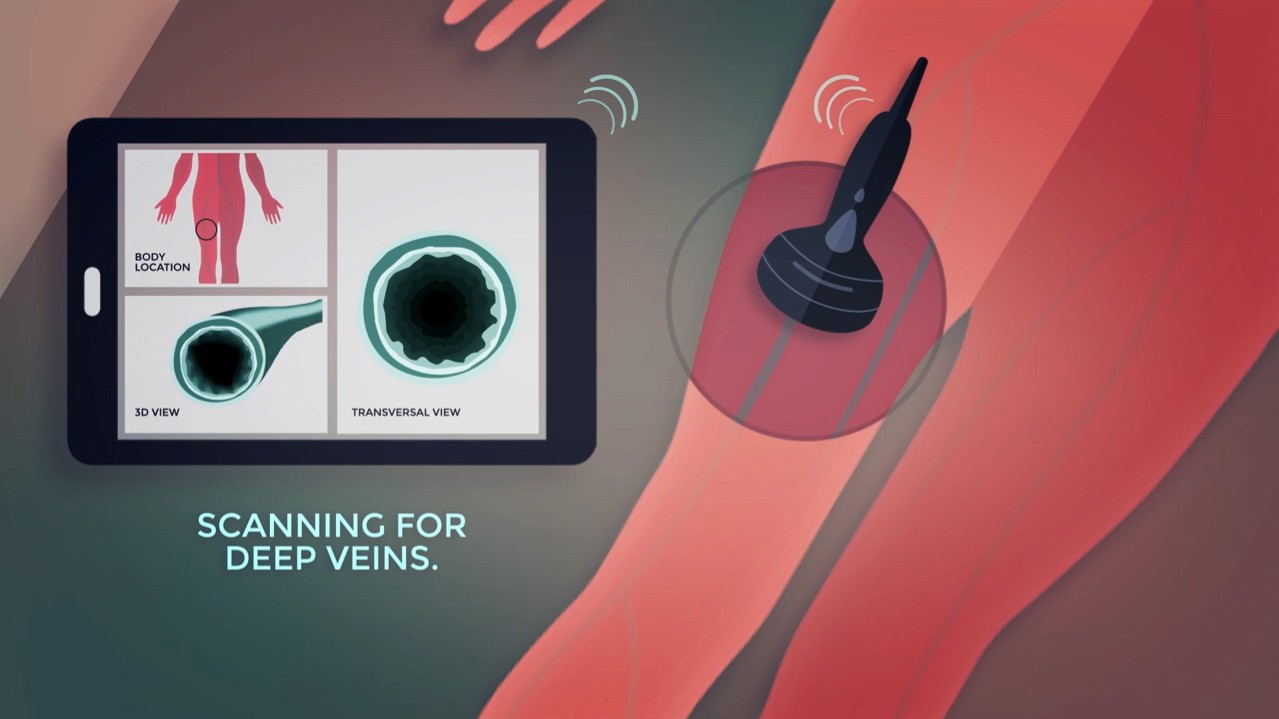 And it’s not just about saving patients an unnecessary hospital visit, taxpayers money and urban doctors a guilty conscience. It’s also about bringing diagnosis to patients who might not otherwise get it at all.

“Now you can go to a remote area and give a nurse this machine,” says Al-Noor. “And with our software she will be able to diagnose DVT. It’s the democratization of diagnosis!”

While the final software is still in development, ThinkSono is already pursuing its primary business model. It wants to develop partnerships with the several manufacturers of the hand-held ultrasound devices, and licence their software. That way, the manufacturers can offer a product with out-of-the-box DVT diagnosis capability, while ThinkSono can leverage their existing sales networks. The fledgling company has already signed one NDA, and is confident of sealing deals as soon as it delivers proof of clinical effectiveness.

While Pioneers Ventures agrees with the strong business case, the potential impact and robust sales plan, ThinkSono sees the investment partnership as a major boon to its development.

“There are quite a few of companies out there doing machine learning on a variety of medical images,” said Pioneers Ventures Managing Director Philipp Stangl. “But ultrasound is a tough nut to crack for AI. We trust the team behind ThinkSono is able to do just that, so we were happy to invest and look forward to supporting the team in the future.”

“We were connected to Pioneers Ventures via one of our angels,” added Al-Noor. “I spoke to Philipp and Markus Lang [Stangl’s fellow Managing Director] on the phone and pitched the idea. They jumped in pretty quickly because they really got the idea quicker than most VCs we spoke to.

“I think they have an amazing network, industry connections and there is of course their annual flagship event Pioneers’18! I think once we mature a little bit, and reach a stage where we can have serious conversations, then their ability to connect us to the European market in terms of large ultrasound companies and hospitals could be very useful for us. As tech people, it’s important for us to get these industry connections, especially from the commercial side.”

Are you a startup from CEE? Then we have good news for you: our Pioneers Ventures team recently launched a series of 1:1 meetings, entitled Office Hours with Pioneers Ventures. Their purpose is to meet with the best local startups in six locations across the region. The next of these events takes place on March 1st in Budapest. For more information check out our event page here.