Can You and Your Phone Match Mozart? 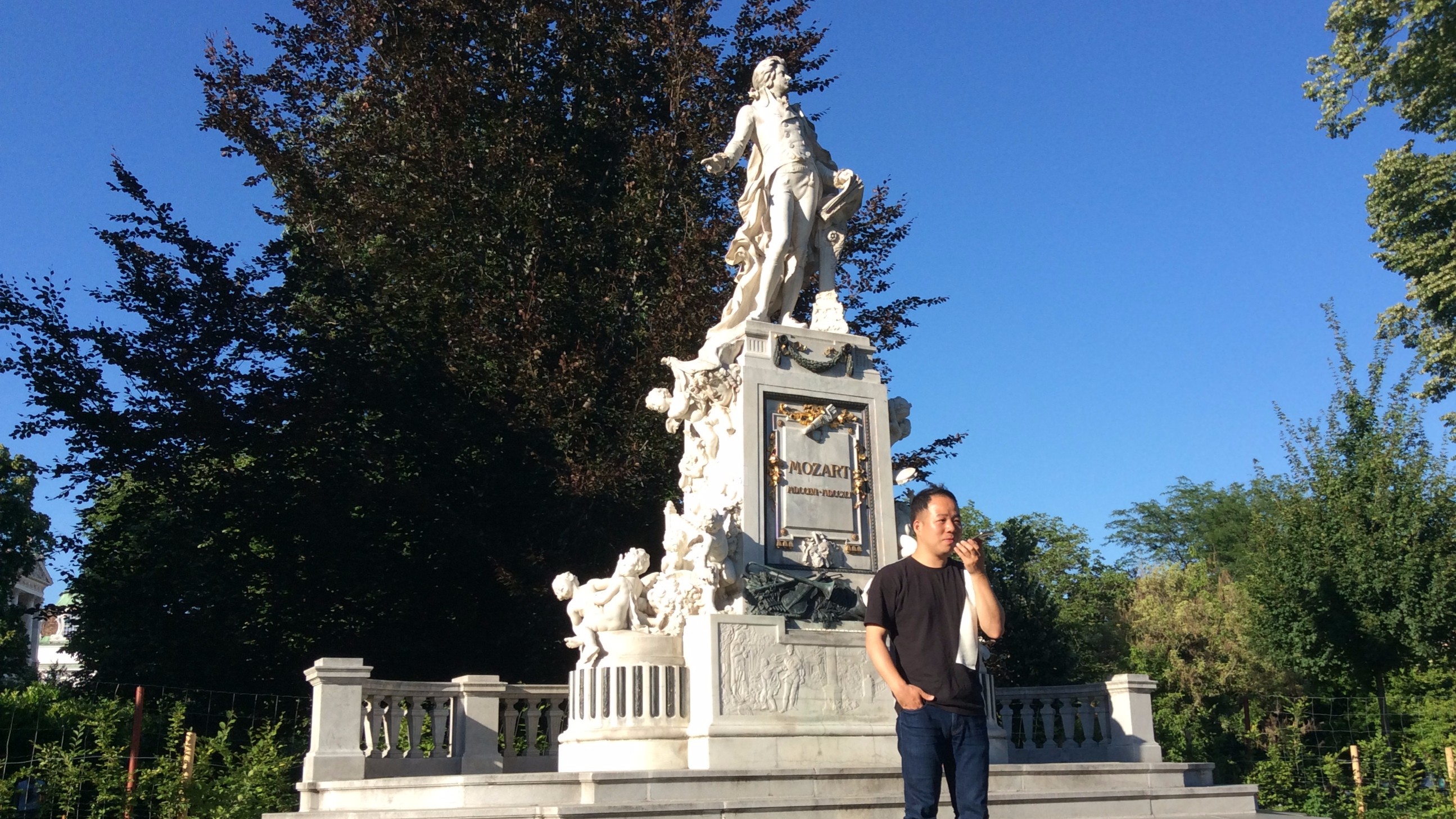 Of all the places to interview COOLJAMM founder David Choi, Vienna is about as fitting as it could get. For this is the most musical city of them all; once the playground of Beethoven, Mozart, Schubert, Strauss and so many more. Where better to work, then, to fine-tune a piece of tech dedicated to making anybody into a composer?

Granted, David is usually based in Korea. But earlier this summer he spent time in the Austrian capital as part of the Pioneers-supported Vienna Start-up Package. He also demonstrated his HumOn app on stage at Pioneers’17, where he got the crowd talking with his simple but delightful piece of technology.

The concept is this: hum any tune you like into your mobile phone. Then let the HumOn algorithm turn your musical creation into score. Then, you choose whether you’d like to hear your basic melody rendered in say, piano or guitar.

Or – and here’s where it starts to really impress – you can let it generate a piece combining multiple instruments. A symphony orchestra performance, say. Here the AI truly shows its power as it lets the system work out combinations of 128 virtual instruments on offer via the MIDI (Musical Instrument Digital Interface) protocol.

Sitting on a park bench on Schillerplatz, I’ve just done exactly that. Not being all that musical (unless you count intermediate didgeridoo skills), I started without any idea about how I would finish. The result is a hopeless muddle of notes.

Still, I’m intrigued to hear a virtual orchestra play that hopeless muddle (I can almost hear the viola players rolling their eyes) after just a few seconds of processing. Nondescript as my input was, the end product doesn’t sound nearly so bad.

I play around with a few more instruments and combinations, unable to resist choosing the glockenspiel at one point. In all honesty, it doesn’t sound half as great as the word glockenspiel does. And judging by David’s polite but mystified reaction, I think I might be the first to try this option in his presence. I gather that it’s a little-known instrument in South Korea.

Here are the links to some of the final products I made with one dull hum and practically zero effort thereafter.

Just one of a new wave of innovations transforming the music industry and opening up opportunities to those with a good ear but little technical ability, it’s worth noting that HumOn might never have happened without the backing of Korean electronics giant Samsung.

Having graduated in electronic engineering in Seoul, David joined the corporation as an employee. Then the keen musician – he plays seven instruments, including piano, viola, flute, drums and various guitars – took the chance to revive a failed university project through Samsung’s internal employee innovation scheme.

His idea was selected and he was able to ‘hire’ colleagues for his project. Starting in August 2015, he had one year to make it work. Suffice to say he and his team did exactly that: HumOn is now an official Samsung spin-off.

“Everyone should be able to be a composer,” says David. “Every human being has their inner musician, even if they don’t have skills on an instrument. Every human wants to express their emotional story through music.

Here are some of David’s own favourite tunes, which also began as simple hums.

“Music has logical and mathematical properties,” he adds. “So I thought composing it could be automated by machine learning.”

That part is already working impressively well. But what’s the business model and where’s it going? Sure, it’s a fun toy, but there has to be more to it than that. David’s answer is really an intriguing one.

“We want to build musical social media,” he says. “Right now people are expressing their emotions through pictures and text; they think that music belongs to trained or gifted people.

“But with the right tools, people can do that through music as well. With an easy way to compose, they will realise it’s not that difficult to be a composer!”

Will sympathy-seekers switch from text rants to sharing mournful bassoon melodies on some new social media platform? Or might teenagers swap tunes they just hummed on a whim, Snapchat-style? It’s the kind of thing that will either be a craze or a flop, but a worthy idea. And if Samsung were to throw their weight behind it, who knows?

While that’s just an idea for now, a good start is that the technology clearly works. And well enough, we think, that even professionals could find it useful to ‘jot down’ inspirations while they’re on the go. They could also use it to choose a broad direction without the time and expense of studio recording every option.

While the core product remains free when the next version releases on Android and iPhone at the end of this month, HumOn is looking at freemium models under which the upgrade might include cloud storage, high-quality accompaniment generation personalised for style or genre, file export capabilities or copyright purchase of the accompaniment track.

As I keen whistler myself, there’s one more thing I have to ask David before we wrap up our interview by way of a visit to the imperious statue of Mozart around the corner. Why humming, and not singing or whistling?

“A singing voice is very hard to detect compared to humming,” he says. “We could have done whistling, but not everybody can whistle, you see…”

And I’m not going to argue with that any more than I’d argue with a raging Beethoven!

HumOn was a category winner at MIDEM in June. The specialist music industry event took place in Cannes, just after Pioneers’17.

Are you or your startup working on some ground-breaking technology we should try out and introduce to the world? Are you a competitor who thinks they’ve got a better version? Mail richard.asher@pioneers.io and get set to show us your tech!