Pioneers Tests: The Future Of Mobility In Vienna

By Sophie RabOctober 29, 2018No Comments 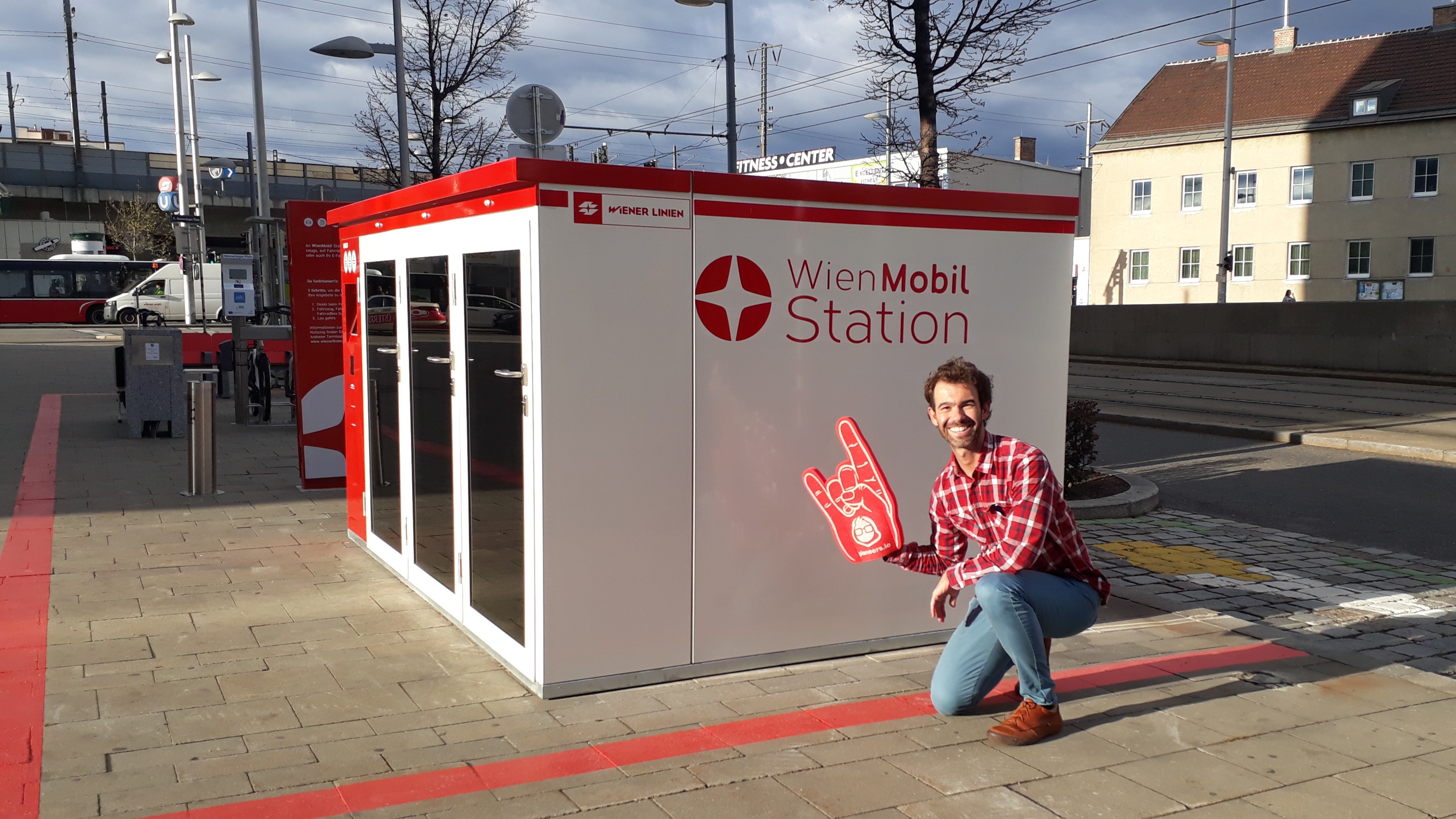 In a world where personalized convenience is now part of everyday life, consumers rightly expect to be able to get seamlessly from door to door. Yet even in the most efficient public transport systems, they can’t quite do that: there’s always that walk to the bus stop, isn’t there? Welcome to the ‘last-mile’ problem…one that many a mobility-innovator is trying to solve!

With efficiency, sustainability and killing congestion all on the future mobility agenda, even carmakers are accepting that nobody should buy a car just so that they can reach their nearest station, or because their place of work isn’t near a bus stop. Current technology can (and should) make that a ridiculous notion, at least in the developed world.

Thanks to established Uber-type services, car-sharing schemes like DriveNow and the latest craze in e-bikes and e-scooters, the personalised journey is already here. Never mind exactly when self-driving taxis hit town: convenient options for short journeys, driven by mobile app, are clearly viable and loved.

These options are cheap enough for most of us to use on a whim, and often comparable or cheaper in cost to running a car. So, what can improve?

Well, linking the best of ‘old’ infrastructure and ‘new’ options in a practical way is still an unsolved issue. Do we really need to be running around with seventeen different transport apps clogging our smartphones? Wouldn’t it be great if all the options were simply a part of a single ticket? If a single app calculated your best way of getting from A to B, integrating the latest ‘last-mile’ solutions with the existing transport network, and took payment too?

Uber is one company trying to make that a reality, but it seems logical that city transport authorities should have a role to play here.

In Vienna, where public transport is arguably the best value in the world, integration makes huge sense from a customer point of view. An annual public transport pass costs just one Euro a day. Which means a lot of people have them. If that pass could also unlock shared cars, e-scooters and the like, it would be next-level stuff. Even more people would invest in yearly tickets: perhaps even going for a next-level pricing option!

Wiener Linien, which runs transport in Vienna, is eyeing the future here. Last month they launched their first ‘WienMobil Station’ at the Simmering transport hub. So we crossed town with Metro Line U3 and checked out this pilot project.

Set up next to a major junction where trains, metro, trams and buses all come together, this hub for last-mile services should be hard to miss. But miss it we did: when you’ve got multiple station exits, seamlessness still needs signposts!

After hunting for several minutes as an evil autumn wind howled around Simmering, we finally found the kerbside spot. It featured several docks for shared e-bikes, a charging station for electric vehicles, a reserved parking spot for shared cars, lockup storage containers for bikes (or similar) and a fixed air pump. 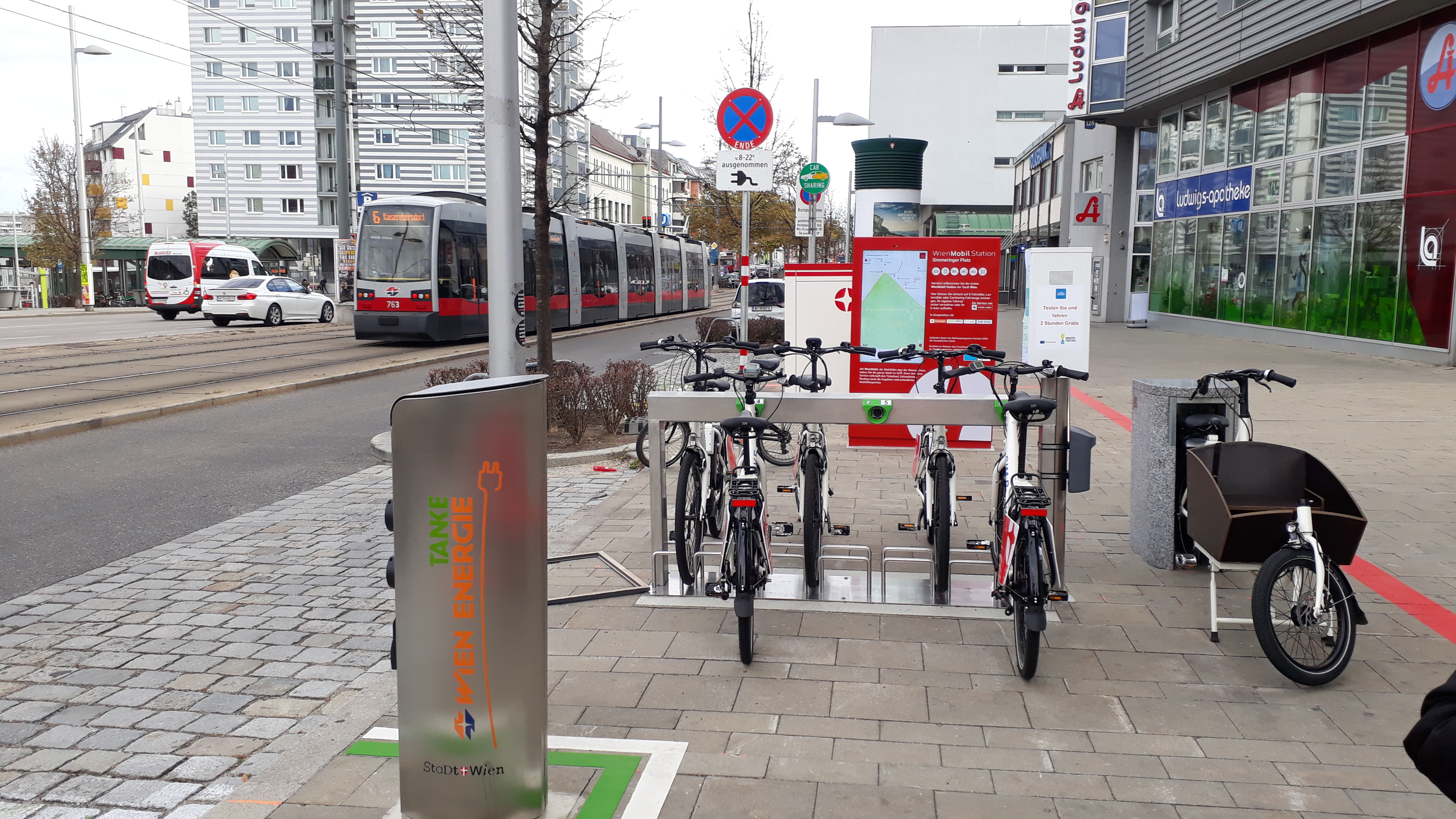 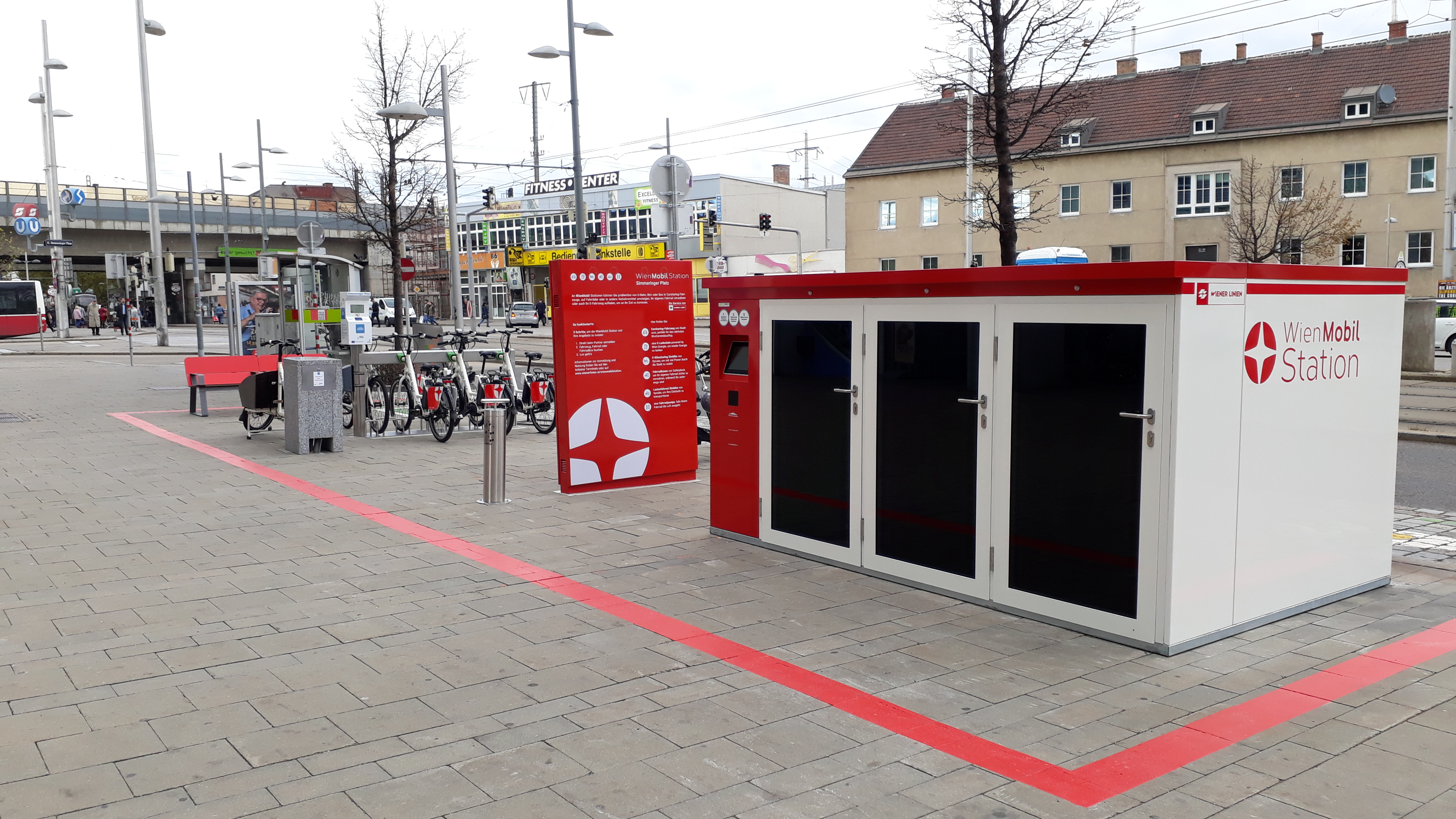 Curious to find out just how intuitive and smooth it would be, we’d made deliberately done no research in advance. But, with an annual Vienna transport pass and driving licence in our pockets, we were hoping it might be possible to drive back to the office using a shared car or e-bike. Maybe we just had to touch our cards on a given vehicle and it would unlock? After all, the city has your full identity if you own a yearly ticket. They’d know who we were if we stole something!

It quickly became clear that such simplicity remains a dream. Unfortunately the WienMobil Station in its current form was a place where you had to stand in the freezing wind and download apps, registering with a bunch of different providers. These included Car2Go, DriveNow, Stadtauto and SIMBike (e-bikes), while the lock-up was provided by SafetyDock. Unlocking anything, though, appeared to require its own app and tedious sign-up process.

The exception, quite literally, was SafetyDock, which let us have an easy free trial without hassle. We put our mobile number in the touch screen, received an SMS code to punch in and quickly had a door open up for us! To be fair, giving access to an empty box is less of a big deal than letting people drive off in a car. But still it was nice to try something out so effortlessly, not to mention get away from the gale for a minute. (It was very tranquil in there – and there’s a power socket too.) 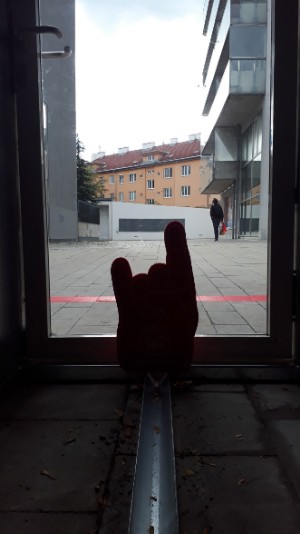 Life inside a bike lock-up in Simmering!

SIMBike offered a ‘free’ trial, which briefly had us considering registering for a ride back to the office. But then we found you had to pay a €10 sign-up fee to get the free hours. Not a free trial, then.

What we did do was download the WienMobil app, which showed all the ‘new’ mobility options in a given radius (not just the WienMobil Station itself) including shared vehicles, electric car charging and taxis. While many of the options were there long before last month, a convenient app and the visible impact of the Station bring their existence to the front of mind. 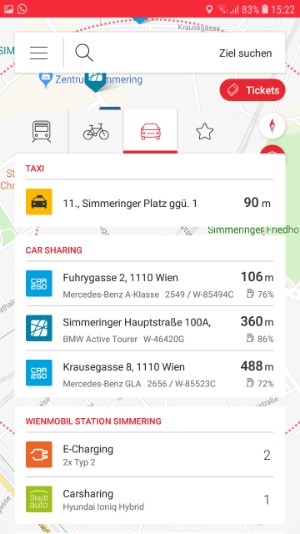 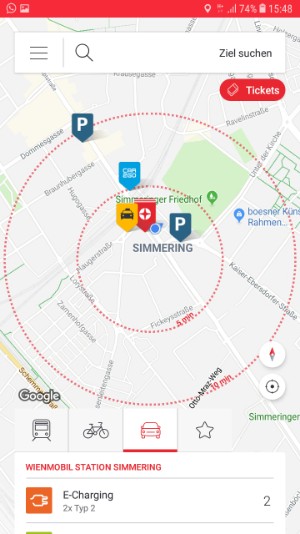 Likewise there’s nothing new about riding your bike to the train station and locking it up for the day either, but if the presence of a sleek, safe lock-up system gets more people thinking about that option, then the WienMobility Station has done part of its job. After all, the biggest future mobility challenge of all might be nothing more than getting people to change their habits.

Still, we’re waiting for the day our yearly ticket becomes a true magic wand. The day when all those ‘partners’ and ‘providers’ get white-labelled into the city transport system, and we don’t need twenty-three accounts and passwords. The day the WienMobil app handles your route and any payments, rather than just redirecting you to partners.

Why not include as much as possible in our transport passes, linking one payment method to the app for extras (car usage over a certain quota, perhaps), and then let the transport authorities take care of the payments behind the scenes? That, to us, should be the dream for multi-modal transport.

Only Stadtauto had really made a visible effort to link their service with public transport. Alongside Wiener Linien branding were special tariffs for owners of yearly tickets. Some of the deals looked good, and you didn’t have to pay a registration fee if you had an annual pass. We even found an offer for new customers, where you could drive free for two hours. But you had to upload documents first, and there was no guarantee of how long approval would take, so we didn’t invest our limited time in that either. (We have done so since, stay tuned to social media for a follow-up!)

The fact that there were no e-scooters also raises an interesting issue. The leave-it-where-you-want model favoured by companies like Lime makes it hard for a key transport hub like this to guarantee that anything will be available. One reason why fixed docking points must surely have a place in an integrated future!

We didn’t see anybody else stopping by the WienMobil Station during the hour we were there, but still, it does give alternative transport possibilities a well-presented stage in a logical location. While it might be a good way of bringing business to existing providers, though, we’ll get excited when Wiener Linien negotiates an all-in-one for us. We certainly didn’t have to drive anything or ride anything to reach that conclusion!

To attend our full-day event on the future of mobility and meet corporates, startups, investors and innovators in the space, click here! Mobility.Pioneers goes ahead in Munich on February 7th.