By Sophie RabNovember 3, 2017No Comments 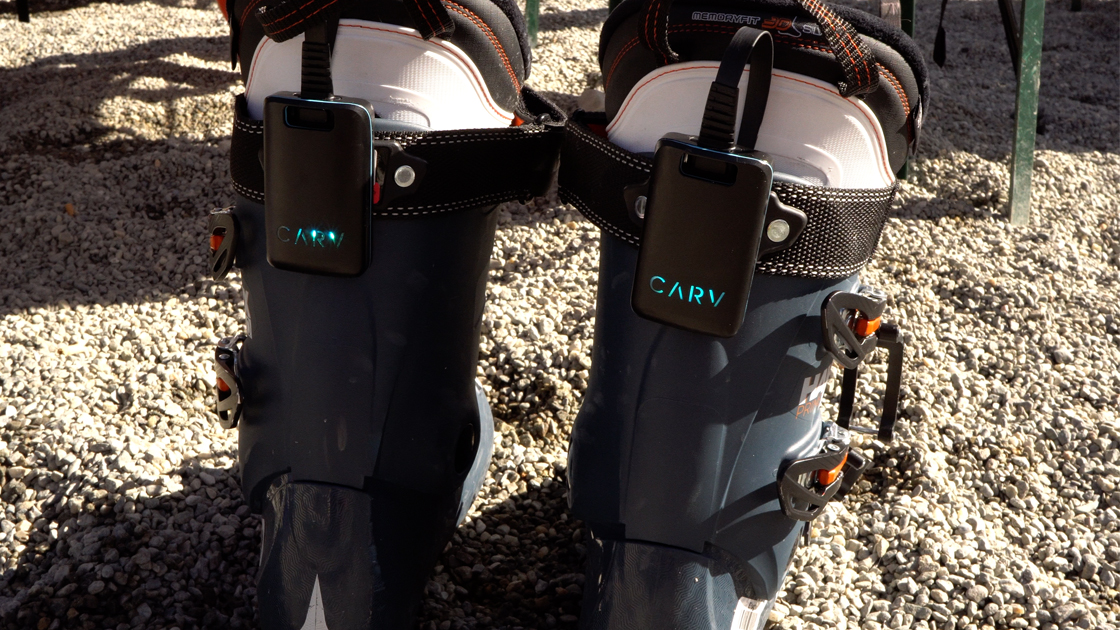 If there was any doubting just what a buzz Carv has built up in ski circles, it evaporated moments after we arrived in the car park at Stubaier Glacier. When the guys who pulled up next to us spotted Carv CCO Ross Murray-Jones in his branded gear, they did a double take and started babbling excitedly. Obviously familiar with Carv’s work and as hungry as the next skier for a cool new performance-enhancing toy, they came over to find out when they would be able to get their hands on one.

The answer? Very soon. Carv’s already shipping the 1500 kits it owes to those who backed its Kickstarter campaign. To be sent from China at the end of November, they should arrive in time for the ski season. As for the other 1500 units in batch one, orders are already open.

It’s fair to say that the idea of an automated, artificially-intelligent ski coach that joins you on the slopes is certainly generating a fair bit of interest. A crew from The Times in London flew out to test Carv a week before we did, while Club Med, a major seller of ski vacations, have also been in touch to talk about possibilities.

Carv’s work has already starting hooking the corporates, too. Having gotten to know Pioneers by attending our flagship event in Vienna for the last two years, they were recently announced as one of the four startups selected to come up with new digital business models in Energie Steiermark’s Next-Incubator, for which our consultancy arm Pioneers Discover is a partner.

Our venue for today’s test is the Stubaier Glacier in Austria’s Tyrol region. A 45-minute drive from Innsbruck and near enough to the Italian border to command views of the distant Dolomites, it’s one of very few places in Central Europe where you can ski all the way from October to June. Perfect, then, for us to get an autumn trial in before Carv goes ‘live’.

Our ski testers are Pioneers staffers Philipp from Finance and Lisa from HR. Both have been skiing since a very young age, as is the case with so many Austrians. The country’s love affair with skiing, in fact, is a big part of why Carv, a startup born out of London, has actually based itself in Tyrol.

After a gondola ride up to the station at Eisgrat (2900m), our test team get kitted up to use Carv. This means ‘smart insert’ pressure pads inserted into the inner sole of the ski boot, and a tracker device – a combined battery and data processor that transmits to the (beta) iPhone app via Bluetooth – that’s clipped to the outside heel.

Ross hands each an iPhone and does a quick calibration test on the pressure pad. When our testers press down on one toe, it shows up in the corresponding foot map on the app interface. In all, the smart inserts have 48 pressure sensors plus an accelerometer, gyroscope and magnetometer. And all seems to be working well!

At first, the mission is to get our skiers back into the groove of hurtling down the slopes (it’s been a few months for both) and gather some baseline performance data. All our skiers need to do is press ‘start’ before tucking their phones safely away and skiing to their hearts’ content. But all the while, the system in their ski boots gathers info that goes way beyond the altitude and speed stats you might get from your phone.

Balance How is your weight distributed forwards or backwards?

Edging What’s the angle of your skis as you turn?

Rotary How parallel are your skis as you move?

Pressure How is your weight distributed between inside and outside ski when turning?

After one run, the Carv algorithm processes all the data (each category has its own sub-sets) and gives you a ‘Ski:IQ’ rating of your ability. This proprietary concept could prove to be a stroke of genius for the startup. A simple metric you can compare with friends at après ski, or indeed with the community of Carv users who’ll be active on the app, it provides a competitive incentive to improve. It’s the sort of feature that might make users stick around for the long haul.

So how do you set about improving that Ski:IQ? After a quick bite, our testers jumped back into the ski lifts to find out. This time, their kit included earphones plugged into the mobiles. They’d be essential to trying out the beta exercises designed to help you improve your game in those four disciplines, which are delivered via audio.

While Carv will be ready with a full range of exercises when the first kits are delivered, they had one drill in each category available for test purposes when we visited. The startup was playing with different instruction concepts, trying out a variety of voice and musical techniques.

The rotation drill, for example, was all about positive affirmations, in which the skiers receiving some fairly general feedback in the ear.

“I liked the voice instruction,” reported Lisa, who achieved a score of 95% on the drill. “It was very soft and pleasant, similar to Siri. She said things like ‘excellent skier’ and ‘keep it up’ a lot, which made me feel good!”

The voice content differed for the edging drill, in which the skier was encouraged to practice getting those angles up as high as possible. Here, it was more a case of simply hearing the numbers as you went along.

It’s not hard to envisage something like the edging exercise becoming de rigueur for instructors coaching skiers negotiating a particular course. Particularly when put together with the amazing video feature Carv has developed with precisely such professional customers in mind.

More akin to something out of Formula 1 than winter sports, CarvPro is smart enough to let you watch the video playback along with the real-time data logged by Carv. Surely a dream for any ski instructor wanting to pinpoint just where that turn-in is going wrong! For now CarvPro will remain in beta while the primary training tool launches, but it’s got intriguing potential. Could it become a must-have in future Winter Olympics?

A combination of rapidly fading daylight (too much time getting our video shots, if we’re to be perfectly frank!) and a smart insert sizing issue for Lisa meant we were unable to fully try out those pressure or balance drills. Which is a shame, as both of our skiers would have liked to have used the ‘stereo’ drill for pressure, which uses music volume in each ear to tell you which which ski needs more weight.

Phillip came away convinced of the tool’s potential for both skiing newcomers and those who’ve been hurtling down slopes all their lives.

“I think rotation is especially useful skill for beginners, while pressure and balance are great parameters even for experienced skiers to work on improving. Those are the two things every ski instructor always talks about: whether you have too much weight forward or back, and whether there is too much on the outer or inner ski.”

While we didn’t get to try all of the drills, we had enough of a taste to understand just what all the fuss is about. It would be premature to judge the beta training exercises ini too much detail anyway: what’s clear is there’s a basis on which to build an awful lot more. For Carv that means a whole range of drills in each category, along with the constructive tips skiers would need.

“We’ve optimised real-time audio feedback,” explains Ross. “While you’re actually on the run, basic sounds or numbers are as much as you need. When you’ve safely stopped, Carv gives you more detailed technique analysis with customised tips and target zones integrated directly into the app.”

“I’m definitely looking forward to trying it with some more analysis, tips or interpretation of the data in terms of everyday language,” said Lisa. “Otherwise I wouldn’t always be sure what to do with the information!”

The overall concept, the app and interface look solid, simple and well thought-out to the point that it’s all but impossible to stump Carv with a product question. With such a multitude of data points being recorded, the startup looks essentially well-prepared to take the digital ski coach to the next level once the numbers from those early adopters start flooding in.

It’s hard to imagine there might not be the odd early glitch, sure, but one doesn’t imagine users would lose faith on the basis of an initial snag or two – not when Carv is the kind of ambitious product for which so many skiers have been waiting for so long.

“Both of the drills I tried worked very well and I’d definitely want to try it next time I go skiing,” concluded Lisa. “I think I could use Carv to work on my balance: I always tend to have my weight too far back!”

“I’d use it on a ski trip too,” added Philipp. “I’d love to work on pressure, as I think I usually have my weight too much on the outside ski. But the more real-time practical advice that can be built in, the better.

“At first, £199 (approx €225 at time of writing) does seem a bit expensive, but you have to compare it to the cost of a ski instructor. This isn’t just for an hour or two – it’s an investment. Personally, I wouldn’t use an instructor on a ski trip anyway – I’m there to have fun! Yet I do want to improve my skiing and Carv is a nice alternative which you don’t have to use the whole time. If you get tired of the audio input you can just switch it off!

“I like the gamification elements and Ski:IQ. It’s good to be able to compare yourself to other people or even to a given standard, like when you try to improve your EcoScore on car2go. I also like the fact that you only had to switch the data logging on once for a whole day’s skiing, and that you can activate the training exercises with the headphone switch. It makes a big difference not to have to take your phone out all the time!”

An innovation that looks truly set to shake up an entire industry in one way or another, Carv is definitely the kind of technology we like to keep an eye on. And now that we’ve given it a try ourselves, we see no reason to start doing otherwise. We’re intrigued to see where the Carv story goes from here.

Are you or your startup working on some ground-breaking technology we should try out and introduce to the world? Mail richard.asher@pioneers.io if you are!