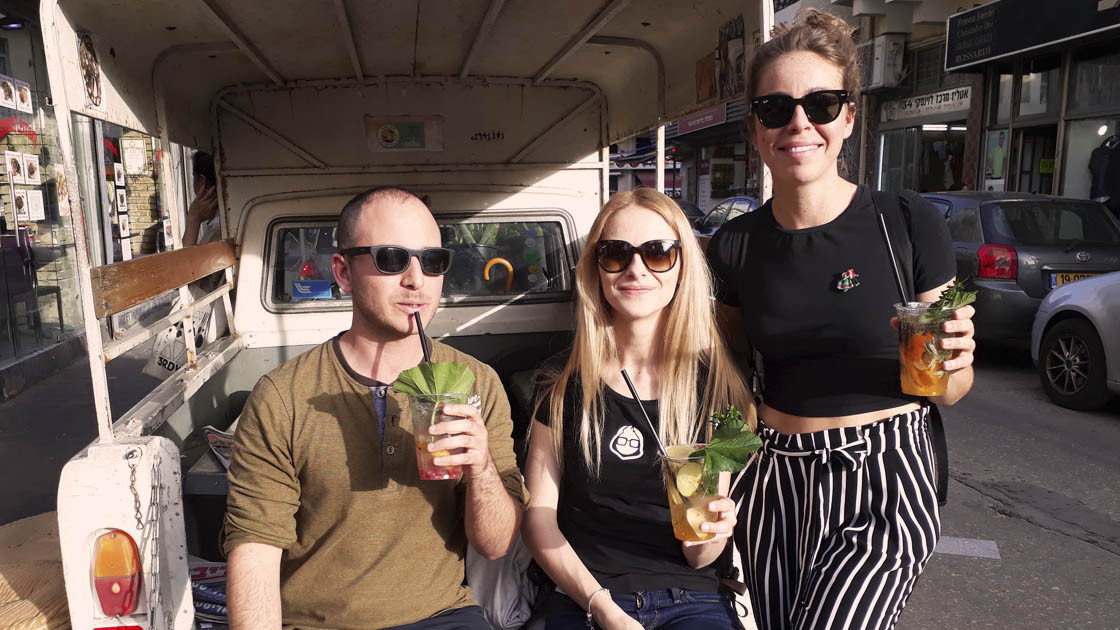 It was with great excitement that four hungry members of the Pioneers crew assembled at Cafe Levinsky in Tel Aviv to try out Israeli food tourism platform bitemojo. It was a sunny Sunday afternoon in Israel and we were more or less fresh off the plane from Vienna. It would be the perfect chance to relax and explore ahead of the recent Booking.com Booster Lab week, for which our Pioneers Discover crew drove the process of startup selection (which included bitemojo) as well as developed and managed the content and framework.

We were looking forward to trying the bitemojo experience, since it hasn’t yet come to our hometown – although you can already try it in Jerusalem, Berlin, Barcelona, Ljubljana, Rome, Budapest and Singapore.

As we found ourselves standing next to a clearly out-of-service vehicle that had now turned into what might be described as an urban herb jungle on wheels, it seemed clear we were in the perfect place to begin a tour dedicated to hipsterism. The Hipster Tel Aviv Tour is one of four bitemojo offers in the city, and comes recommended by its Business Development Manager Ben Peres, who joined us on the day.

As with any bitemojo tour, we would be trying out numerous ‘bites’ at different outlets, whilst at the same time getting to learn the story of the people who make those tastes what they are. And whilst following the route via the slick bitemojo app, we would also learn a few interesting things about the Florentin neighbourhood. Originally settled by immigrants from Bulgaria and Thessaloniki, it’s an authentic part of town that tourists don’t always discover. It teems with life, graffiti and, yes, hipster joints.

Despite what looks like quite a bustle going on around us, Ben tells us he’s never seen the neighbourhood so quiet. It’s the day after the Purim festival, so perhaps more people than usual are nursing sore heads. Nonetheless, if this goes down as ‘quiet’ then Tel Aviv certainly does operate on a separate scale to everyone else. If ever a city deserved the ‘work hard, play hard’ tag, then Tel Aviv is it.

Logically enough, most bitemojo tours start with a drink, before moving on to a few savoury dishes and finishing up with something more in the realm of coffee and sweetness. Claiming that first drink at Cafe Levinsky couldn’t have been any easier. It was simply a case of hitting the ‘claim bite’ button in the app, and then showing our phones to the vendor. It’s a strange feeling not to hand over any payment for your fruity gazoz, but every bite is included in the €30 tour price. bitemojo sorts out paying the vendors at the end of each month.

As we enjoy colourful glasses of soda-and-syrup, which are packed with seasonal fruits and spectacularly refreshing, we consult the app for a bit of the back-story. Here’s where you learn how cafe owner Benny makes his zingy syrup by fermenting fruit and herbs himself. You discover that the fresh herbs and spices in the drink are as local as you can get: they’re actually plucked from the garden on the pick-up truck! The vehicle, incidentally, also serves as a good place to grab a seat – a prized thing in a neighbourhood where hole-in-the-wall outlets without tables abound.

We move on, following the green line on our app. But it’s a lot more interesting than Google Maps navigation. When we pass an interesting deli specialising in Balkan food, it tells you about how the owner here came from Thessaloniki after losing all of his family during the Nazi occupation of Greece, and how, since his passing in 2014, it’s being run by his son and grandson. As with many stops on the tour there’s no ‘bite’ included here, but certainly a morsel of knowledge. One that might even inspire you to strike up a conversation with the owners.

These tidbits about ordinary people are not the kinds of stories you’ll find in traditional guidebooks. And in an age where travellers look for experiences and connections, bitemojo is surely delivering some unique value here.

Next thing we know, our Pioneers crew is fuelling up on flaky and filling Turkish borekas, with pickles and eggs on the side. This no-nonsense cafe, we discover, grew out of a humble street cart – a reminder that scaling even the simplest of startups is something they’ve always been good at in Israel!

Then it’s on to claim some gorgeous fish and chips. More of a taster portion, these crispy beer-battered bakala really do come in ‘bite’ size. Which is a good thing, because we’re already starting to feel a little sated. We sit on bar stools on the sunny pavement and get served through the window, while we marvel at the ‘crazy costume’ stores that abound on this particular intersection. Despite all the fancy-dress of Purim, they’re still brimming with stock.

We move on again, plunging deeper in the Florentin. We learn about Bauhaus buildings and furniture stores, unpack specific works of graffiti, meet vintage art store owners, see Spanish-style streets and synagogues with stories, and discover the connection between black Hebrews and veganism in Israel. (Well, you couldn’t have a hipster tour without a dash of veganism, could you?)

There’s more food along the way, of course. Things get traditional with hummus, falafel and fatoosh salad, again eaten in the al fresco fashion of the Tel Aviv spring. We grab cortado coffee (in Israel, that’s espresso with a dash of cappuccino foam) at a corner hatch that’s even cuter than the first.

We’re so full by the end that we actually leave one of our ‘bites’ unclaimed. But that’s okay, because bitemojo does not expect you to eat until you burst. Our tour is loosely designed as a three-hour affair, but you can claim your bites any time you like, as far apart as you like, and in whatever order you like. So you could stretch it out over a week, if you wanted to.

Where good food and travel is concerned, it’s hard to find much to complain about. The concept is hard to flaw as a travel experience, and lends itself particularly well to places where the language is tricky and ordering anything is tricky. Japanese and Chinese cities must be a prime candidates for bitemojo tours.

It’s easier to think of additions than ‘corrections’ as such. There’s room to add more value at little cost to bitemojo, in terms of fleshing out more information about the restaurant owners. And why not include the actual recipes in a follow-up email? Recreating food memories, after all, is one of the best ways you can relive a holiday.

And while our tour was a terrific mix of cuisines and an interesting route, there must be room for a tour that focuses on purely local food. Trying the famous staples in any country is often more of a challenge than it should be, and having a bitemojo tour group them all in one tour would surely get more than a few takers from the foreign tourist market.

One thing we’re curious to see is how bitemojo overcomes the challenge of data roaming charges.
Simply put, most tourists strongly resist turning on the mobile data, because it usually makes for an expensive bill. Our group was no exception, although it’s worth pointing out that tours for multiple people can be managed from a single connected phone.

Could it be an idea to partner with mobile companies providing a local SIM? Bundling a SIM pickup as the first stop on the tour could be a useful extra option for uncertain clients and revenue stream for bitemojo. Because getting data does have its similarities with ordering food in another language. The process of figuring out the best deal, or even where to start, is such a hassle that it’s often too much to bother with on a short trip.

As is the case for almost all Israeli startups, scaling this idea from a tiny domestic market remains the biggest challenge. With its presence in various international cities, it has made a start on its global expansion already.

But while having a product on three continents is one thing, netting a mass of customers there is another.
Key is for bitemojo to grow from a primarily B2B product – many of its early ‘bites’ have been guzzled down by corporate employees – to a product consumers choose to use directly. With the Booster Lab’s primary emphasis on such expansion tasks, however, bitemojo came away from the event with – if you’ll excuse the pun – plenty of food for thought.

“Bitemojo has done a great job of providing a niche product in the food experiences segment,” said the startup’s mentor at the event, Karan Wallia, Business Development at Booking.com B.V. “Their differentiating factor is in the self-service experience for travelers to discover local food vendors at a very affordable price. This is what Bitemojo does uniquely well so its important for Bitemojo to continue to keep this at the core of their offering in order to create value for the venue as well as the customer." “A key challenge will be maintaining the quality of supply as Bitemojo expands into new markets and has to rely on local partners, Bitemojo will need to invest more in ensuring customers have access to high-quality local supply.”

Are you or your startup working on some ground-breaking technology we should try out and introduce to the world? Mail hi@pioneers.io if you are!