By Sophie RabNovember 27, 2017No Comments 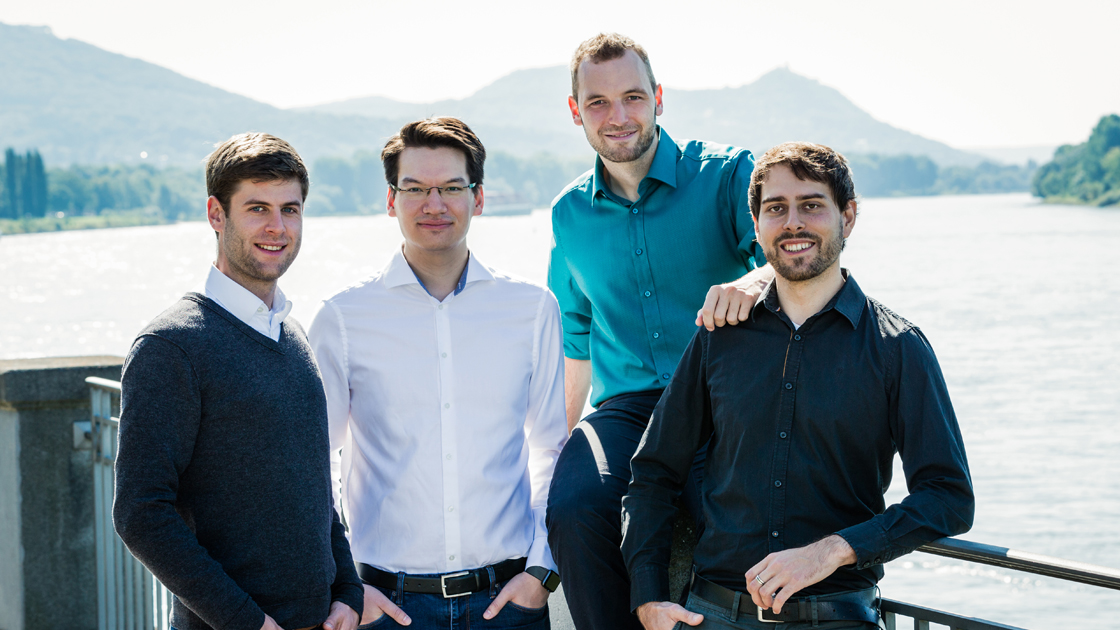 Less than two years old and still with only four full-time employees – the quartet of co-founders, to be precise, Skymatic can be proud that its Cryptomator software has been chosen to bring unprecedented end-to-end encryption to cloud services with around 30 million users. To be branded GMX Tresor and WEB.DE Tresor (tresor translates loosely to ‘vault’ in English), it’s a dream deal for a young startup.

To put it in layman’s terms, the Cryptomator software provides an easy way for you and me to ensure that any data on our devices is securely encrypted before it leaves home and travels to clouds such as Google Drive, Dropbox and many more. Until now this has only been an add-on you would download for your iPhone or Android device, or for Apple, Windows and Linux computer operating systems.

Critical is the fact that the encryption comes from a third party. The idea being that while your files might live in the iCloud or the like, Tim Cook (or similar) cannot read them.

While the software remains available for individual users as before, now all the cloud storage customers from the two German behemoths can expect this level of third-party security as a standard feature. And that level of security, says Schmickler, is something that Google and Dropbox are not yet providing.

“Our clients want to emphasize that they stand for security, and
differentiate themselves from the providers in the USA such as Dropbox or Google Drive by providing maximum security to their users,” says Schmickler. “Dropbox functionality is probably unbeaten while Google doesn’t do a bad job either, but in terms of privacy protection and information security, none of the really big cloud providers have end to end encryption integrated yet. In this case we’re white labelling our software and integrating it with the GMX and WEB.DE brands and functionalities.”

Skymatic look to have chosen a very smart niche in which to seek business. As our lives and our work move more and more into ‘the cloud’, so security becomes more and more of an issue for those providers. And the responsibility for that security lies squarely with those storage owners. It’s a bit like selling new cars: no driver is going to check up that you’ve sold them safe brakes, but you better be prepared for one heck of a storm if there’s a failure. Even the likes of Google or Dropbox will take a hard hit if there’s a major leak.

That’s why it’s no surprise that Schmickler sees deals like this – in which providers get to say ‘hey, look, use us, because we brought these guys in to make sure we can never spy on your files!’ – will be the big earner for Skymatic.

“I’m certain this will be the case,” he says. “People do want their data protected, but at the same time they are not ready to spend money on it and not ready to have any additional effort – not even downloading an app! We sell a few hundred apps every month but that is a niche market.”

Another reason it’s a smart place to be is that business opportunities exist far and wide. In GovTech, for example. Which is why Schmickler participated in the sessions at the Hofburg back in June, and is hoping to return to this year’s expanded GovTech.Pioneers event on May 23rd.

“Wherever there are documents that need high protection, this is where we can adapt our software to different use cases. Since governments have a lot of important data that has every need to be protected and saved in a very secure cloud, we think we may be able to provide a solution for government technology in the future.

“One example might be if there was a ‘public cloud’ that every citizen can use, where they have all the important documents that government entities need to provide, and which they can access it all in real time. It could also be updated in real time. We could make it very safe because we could combine the password with biometric ID functionality.

“I look forward to coming back to GovTech.Pioneers if we can! This year was the best startup conference I’ve attended so far and I really like the idea of an exchange between startups and politics. In my experience the most interesting conversations often take place if people with very different backgrounds come together. That’s what I particularly enjoyed during Pioneers’17 in general and at the GovTech session in particular.”

For now, though, Skymatic’s focus will be on making sure things run smoothly with GMX and WEB.DE. The team is well aware that if all goes without a hitch, it could open a lot of doors for them. They’re not the only open-source solution operating in this space – so they need to show they’re the best at user-friendliness, ease of integration and, of course, not getting hacked!

“We’re looking forward to learning from the experiences of such a high number of users. We hope this market validation, and this kind of test for our software, shows that it will withstand any attacks. We hope this will be proof of the quality we can provide and bring us publicity. Then we would have the chance to go into sensitive areas like insurance, finance or even military, in order to protect data in those areas where high-end security is a must-have.”

A fun fact to end off? Schmickler doesn’t recommend that we be using WhatsApp, even though it’s the one place where many of us might have first seen the phrase ‘end-to-end encryption.’

“Messages might be encrypted but meta-data isn’t encrypted, so they do have info about who communicates with who and when. They also download your whole phone book, and in their privacy agreement you even agree that everyone in your contact book agrees for you to share their data with WhatsApp! I would recommend Signal, an open-source solution that provides all the aspects of privacy that are important.”

Because in this day and age, you simply can’t be too careful…