By Richard AsherJuly 4, 2017No Comments 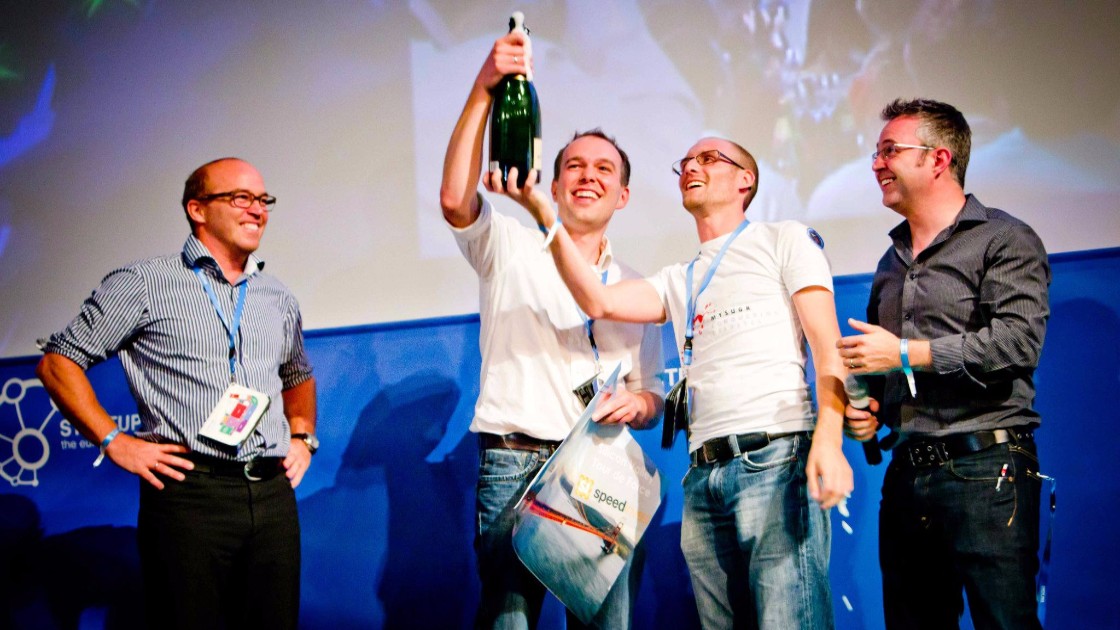 The winning entrepreneurs from our very first major startup event six years ago, mySugr, announced last week that their company has become a part of established global healthcare giant Roche.

The exit for the digital diabetes management company – which sees no change to their brand identity – represents one of the most spectacular success stories from the Pioneers family. Pioneers Festival can trace its lineage to Startup Week 2011, which morphed into our spectacular at the Hofburg from 2012. It was at Startup Week that our champagne celebration tradition began – and the drenched winners at Haus der Industrie that day were Fredrik Debong and Frank Westermann of mySugr.

Back then the company was best described as an extremely early-stage startup. But fast forward six years, to the inking of the Roche deal on Thursday, and it was party time at mySugr’s Vienna offices! Which are now home to 40 employees as their inspiring growth story continues.

So, what now for the four founders behind the revolutionary system that allows Type 1 diabetes patients to take charge of monitoring their own data and make better, more positive decisions about their lives and their therapy? Hammocks under palm trees, perhaps? No way, says Fredrik.

“Under the deal we’re free to leave but none of us will,” says the Swede. “The mission is not to get rich quick. The mission is to change the philosophy of diabetes therapy and make it suck less. And with Roche, our punch has gone from mosquito level to Tyson level!”

This is exactly the kind of spirit we’ve come to expect from the startups who succeed at our events. Fredrik, along with a third of the company, has Type 1 diabetes. That means mySugr are in it for the right reasons – and for the long haul. The million subscribers they already have merely hints at the numbers they could reach, as they play a central role in the refreshed strategy for Roche Diabetes Care.

mySugr has been working alongside Roche since 2014, but Startup Week 2011 played a big role in them becoming one of the small minority of startups that stay around that long – and go on to flourish. “That event was one of the moments that really put the dot on the exclamation mark for us. Even if you believe in something, you really need the outside push of somebody else believing in you. That gives you momentum and confidence, which you need as a founder.”

“The feedback and connections you get when you pitch and win at something like that are fantastic,” says Fredrik, who continues to attend Pioneers Festival each year. “For example we’d met Hansi Hansmann previously, but the event brought us closer together and he became an investor. It also brought us closer to more collaborators and future employees.”

And so to the question every hopeful founder will want to hear Fredrik answer: is there a golden key to enjoying this kind of startup success story?

“Forget yourself,” he says firmly. “A startup with an ego is set up to fail. Everyone at mySugr has had to take a beating a few times. But that moulds you together if you handle it correctly. So just forget yourself: you aren’t in it for you. Your customers come first. Your family and employees come second. Third come your investors. Only then come the founders.”

So, do the crew at mySugr feel they’ve ‘made it’ now? “We’ve grown up,” says Fredrik after careful thought. “We started throwing spaghetti on the wall in 2010, just to see what would work. Since then we’ve gone from being kids, through the teens, and now we’re adults.”

Adults making a real difference to millions of people, whose challenges they truly understand. Still real pioneers are after all these years: long may they continue to do us proud!