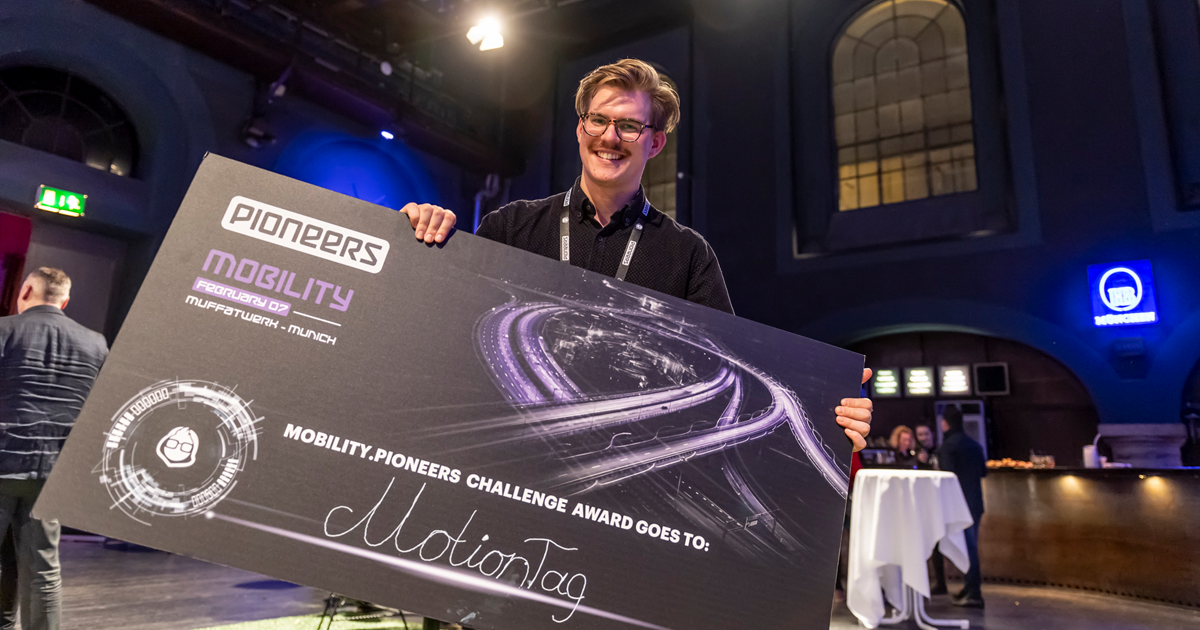 MOTIONTAG defeated NAVENTIK in our all-new ‘Startup Battle’ format to claim glory at the third edition of Mobility.Pioneers in Munich on February 7th. The Berlin-based company offers mobility intelligence technology that integrates into cellphone applications and helps providers offer cheap, seamless and user-centred services. Their victory in our latest industry-focused event assures them an automatic pitching place at Pioneers ’19 in Vienna in May.

MOTIONTAG’s technology enables stress-free, multimodal travel for passengers and more precise data for transport companies to provide it.
It allows for more efficient multimodal traffic management and offers mobility providers a sales channel, up- and cross-selling possibilities as well as data optimisation possibilities.

“I’m pretty excited to have won,” said Chief Operating Officer Fabien Sauthier. “It’s always nice to get recognition like this – word of mouth is super important in our business. Some of our customers are here, and they do talk!”

The annual event at Muffatwerk saw Pioneers take a new approach to the pitching competition format. In the first round, the ten hand-selected selected startups could only continue past the first 99 seconds of their three-minute pitch if a jury member hit a buzzer. The final round took the form of a Startup Battle, in which each of the three jury members threw a question at the two finalist founders.

“I really enjoyed the Q&A format,” added Sauthier. “It makes it much more natural than just pitching. It was really cool because what comes out when you answer a question is exactly what you feel in the moment. I found it really interesting.

“I met a lot of people today, including investors, potential clients and existing clients as well. It was a bit stressful pitching in both rounds with so much business to do in the middle of it all, but using the Pioneers Match & Meet networking service really helped organise the day in that respect!”

The juries used Pioneers Rate, our new digital solution for pitching sessions and competitions, to score the startup competition. This ensured a consistent and transparent rating process. Thus we can report that MOTIONTAG made the final with a particularly strong score for its product and its ‘Pioneering’ factor, whilst also beating its rivals on traction and team strength. Things were closer in the other pitching group, but NAVENTIK was at least joint-best in all of the five categories.

With all the startup pitching taking place on the main Arena Stage for the first time at Mobility.Pioneers, there was less time for content such as talks and panel discussions. Which resulted in exactly what we’d planned: quality, not quantity!

Clare Jones, CCO of what3words, earned her company a flood of downloads and a barrage of audience questions after introducing their revolutionary method of mapping the world. What3words has divided the entire planet into 57 trillion 3×3 metre squares, assigning each with a three-word name that could be anything from ‘pizza.elephant.trick’ to ‘soap.kitten.desert’.

“It’s time for a new, universal addressing system that’s built for both voice and autonomy,” said Jones in her talk. “If you want to meet somebody for a date on a park bench in Berlin, you can now give them a three-word address in French, Swahili, Chinese or 24 other languages.

“Yes, it’s a psychological shift and yes, it’s weird when you use it the first time. But you know what? I’ll take three words of data over five lines. Even my grandparents are using it.”

Unsurprisingly for a natural-language step in user experience that’s gaining swift adoption everywhere from bus stops in Ulan Bator to Deutsche Bank offices, what3words really captivated interest from both investors and potential partners. Speaking of which, the system is already integrated in some Mercedes vehicles – and the Head of Innovation & Partnerships at Daimler’s CASE IT division Michael Vormittag spoke about the collaboration in the New Business Models for OEMs panel discussion later in the morning.

“The work Mercedes have done with what3words is a great example of how you can achieve good outcomes if you put your mind to it,” said Vormittag’s fellow panellist, Sebastian Peck of InMotion Ventures. “You have to give them kudos for what they have achieved there.”

Other stage features in the morning included an Urban Mobility: How Can Cities Adapt panel discussion, and Tommaso Gecchelin introducing the audience to the Next Future Transportation modular mobility concept.

Later in the day, panel discussions covered the latest trends in electrification and the potential impact drones could have in humanitarian efforts. Another tackled the When Are We Boarding The Hyperloop question, in which panellists Dr Kasia Foljanty (Hyper Poland) and Tim Houter (Hardt Hyperloop) agreed that commercial routes could be running by late in the next decade.

“Considering all the challenges to solve, including regulation, funding and standardising the system, the end of the 2020s is doable,” said Dr Foljanty. “That’s when we could be boarding hyperloops as passengers.”

The Future of (Urban) Air Mobility panel discussion welcomed some old Pioneers friends to the stage, including our 2015 flagship event winner Svilen Rangelov (still cultivating a lengthy beard, in keeping with his vow not to shave until a full-scale prototype of his DRONAMICS Black Swan unmanned cargo plane takes to the skies) and Stefan Vadocz of AeroMobil, whose 3.0 prototype flying car made its world premiere at our flagship in 2014. Also on the panel was Andreas Thellmann, Program Manager at Airbus Urban Mobility.

“My objective is that all of you in this room will be able to use an air taxi in the next decade,” said Thellmann. “And at Airbus we don’t just want to develop the vehicle, but move to Mobility As A Service.”

“The current means of transport have reached their limit,” added final panellist, Andreas Perotti of FACC AG. “We need to think 3D, and with current technology it’s now possible to have that at a reasonable and affordable price.”

Mobility.Pioneers attendees also got an update and the chance to network with the people behind the new global mobility innovation hub being planned in Rotterdam.

“We want to have a physical space that actually makes innovation visible,” said Julia Oomens-Meer of Rotterdam Partners, who presented the project with Kayvan Nikjou of Magnetica International. “Somewhere that everybody from children to older people can see, feel and experience things before they get onto the market. This is something we haven’t done well in Europe up until now.”

The next Pioneers event will be GovTech.Pioneers, which takes place at the Vienna City Hall on April 2nd. Click here to buy tickets or apply for free startup selection (deadline Sunday April 10th!).