By Richard AsherAugust 31, 2017No Comments 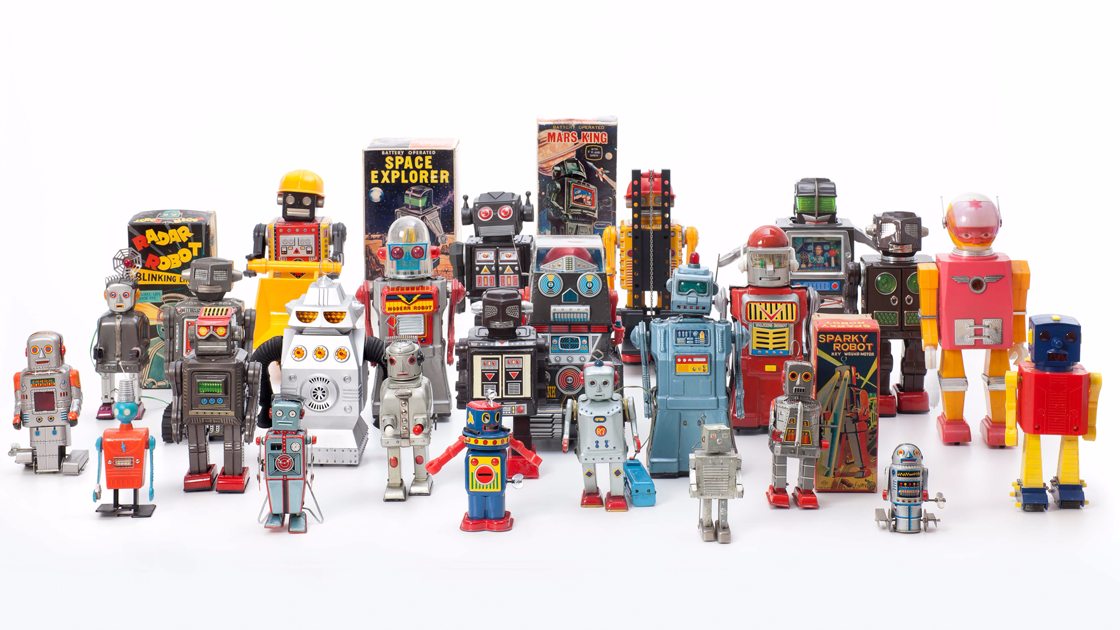 Fourteen questions guide you through the Hello, Robot exhibition currently showing at the MAK in Vienna. Some are broad (‘do we really need robots?’) while others have a tighter focus (‘do you want a robot to take care of you?’). These words are physical: they hang suspended above the exhibits. Much like their respective answers, really.

The ever-present big questions (all in English) and the division of the exhibition into four broadly time-sequential ‘chapters’ ensure plenty of structure. But despite that logical flow from past to present to future, there’s no escaping the timeless jumble of conundrums we hit when the subject is robots. The future’s fears and challenges are much the same as the past’s, it turns out. And the same big themes hit you no matter where you are in the museum.

The moments that really follow you home are those intuitive responses you had to individual pieces. It’s surprising just how violent these can be. While you’re inclined to reserve judgement on those bigger questions (‘Do You Want To Become a Producer?’) until you know more, reactions to some of the pieces of current or future tech can be a sudden and violent ‘yes please!’ or ‘no way!’. Which is, one supposes, the point of an exhibition like this. The individual provokes emotion, leading reflection to the general.

Those swift intuitions are exactly the ones we need to experience, never mind which side of the robotics fence we sit one – if we’ve chosen a side at all. It’s nourishing to see that not everything about the robotics world has to be apocalyptic. And it’s equally healthy to meet the aspects of it that might revolt you. Because when it comes to the bigger questions in this area, all we can really do is break them down into smaller ones.

As something of a cynic myself, it’s the positive applications of robots that stayed strongest in my mind after leaving the museum. I never knew about the corruption-proof traffic officer robot a group of female engineers created and built in unlikely Kinshasa. Then there are the water drones that look for refugee vessels in distress, or military machines like Dragon Runner, which carries out bomb disposal and other dangerous tasks.

It was also a fun thing to meet Kip (I think robot might need surnames soon), the ‘Empathy Robotic Object.’ Guided purely by tone of voice, it (he? she?) takes on the pose of a curious, fascinated cartoon animal when people are talking nicely. Or cowers and trembles when folks get nasty. One can imagine Kip being a useful therapy for those with anger management issues.

While on the subject of therapies, we simply cannot forget the positive influence robotics and artificial intelligence is having in the medical context. On display is the EksoGT robotic exoskeleton – yep, the one that stole the show at Pioneers Festival 2013 – which can help a paralysed person get up and walk. So too is Leka, the ‘smart toy’ designed to help autistic kids. Further compelling examples – from bionics to brain implants for Parkinson’s sufferers – make the TV presentation in the fourth ‘chapter’ well worth a watch. Intuitive reaction? Overwhelmingly positive. I’m certainly not in favour of telling any of the people who need these things that we want to outlaw this helpful technology.

But, on the other side of the emotional coin, the video of ‘Alice’ in action stays with me. It showed a Dutch robot taking the place of a carer and companion for the elderly. I instantly disliked her: she’d crossed some deep-rooted line governing what should be human and what shouldn’t. Similarly, the clip of Joaquin Phoenix discovering his robot companion ‘cheats’ on him in the movie Her was freaky. And not in a good way. I can’t tell you that my part in the free-for-all discussion with award-winning chatbot Mitsuku was any more satisfying, either.

Nor could I say I warmed to the idea of Frebble, a pair of devices that allow for some kind of long-range exchange of ‘touch’. For me it lacks the human touch (pardon the pun), but I suppose a spot of ‘teledildonics’ can’t do any major harm. Kevin Grennan’s Smell of Control, in which sweat glands were built into robots, was the kind of thing that makes you wonder what the point is in trying so damn hard to replicate something we’ve already got. Help the sick, break down bombs and manage traffic, by all means. But recreating humans and their experiences for the sake of it? That’s where a line began to appear for me.

Mixed up with the examples of specific tech are more ‘arty’ pieces that simply show points of view in memorable ways. Dystopian futures are of course a common theme here. Even on the most marvellous of days in the office, who could resist a music video called Kill Your Co-Workers? This amusingly over-the-top creation shows what might happen when our colleagues are robots…

As if to illustrate the impossibility of categorizing this exhibition, that particular piece is not part of the chapter cover the future of work. What you will find there is Edward Burtynsky’s giant photograph of a 450-metre-long assembly hall in Xiamen, China. Full of practically faceless workers in identical uniforms, it makes you wonder if some of us aren’t basically drones already.

But while people performing that kind of menial task may surely only benefit from being freed to do something more fulfilling, the Alice (surnames, I tell you!) character in the disturbing The Last Job on Earth cartoon looks more than a little upset when her computer boots up and says ‘We’re upgrading our workforce, and we’re sorry to tell you…’

And as you think about these things, you notice a framed story from Der Spiegel, the headline of which screams ‘100 million unemployed in 40 years?’ The date on the story is 1982. Which may be a lesson that some things don’t change all that much. And when they do, it might take longer than we fear. Not that that’s a reason to delay thinking about where we’re heading.

A final note for those with a soft spot for sci-fi and the like. The first chapter of the exhibition might be a treat. You can meet a phalanx of (mostly Japanese) post-war toy robots, eye up Jan de Coster’s ‘transgender’ Robin and enjoy Nintendo nostalgia in the shape of the rather primitive R.O.B. (Robotic Operating Buddy) from 1985.

There certainly isn’t space here to start digging deep enough to draw major conclusions about exactly how we should handle our robotic potential. And, if you’re cynical, you might very well say that those with power and money will make the decision for us anyway. However, it never hurts to be educated, and exhibitions like this have real value in summing up where we are and where we might going.

Hello, Robot. Design Between Human and Machine runs until October 1. It’s just one of the future-facing exhibitions in the Vienna Biennale 2017, the overall theme of which is Robots, Work, Our Future. The exhibition then moves to Ghent (October 2017-April 2018) and Winterthur (May-November 2018).