By Sophie RabSeptember 28, 2017No Comments 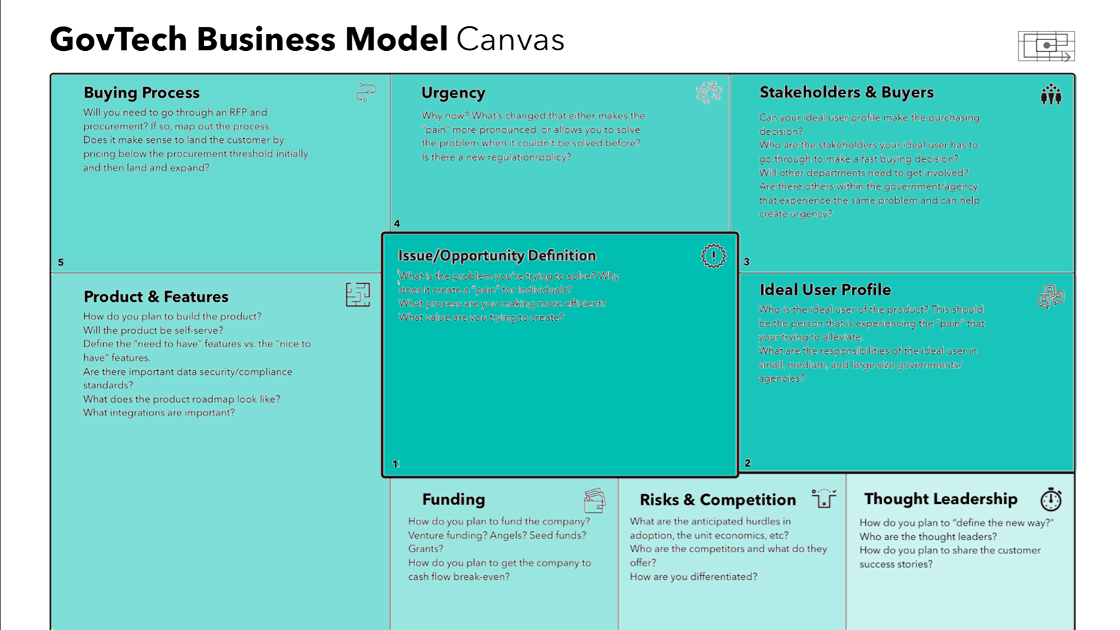 Frederik’s nine-step process is packed with the GovTech-specific questions startups should ask themselves as they assess their viability. And it draws heavily on his specialist knowledge of how the ‘B2G’ space differs from the B2B.

Frederik’s detailed advice in this area is definitely worth a close look. After all, he’s spent many months speaking to stakeholders throughout the GovTech space and understanding their needs. He’s done a lot of ‘investor homework’, in other words.

“In the last 10 months I’ve spoken to somewhere between 45 and 60 founders. I’ve also spent five months talking to civil servants. I needed to understand their needs and what problems they see compared to the problems startups are telling me they see.”

The great news is that Frederik has turned those insights into a practical plan in the form of the GovTech Business Model canvas. A terrific starting point for the growing number of GovTech founders out there, who still face a relative lack of content and resources specific to what is still a relatively nascent field.

“What I’ve done is re-purpose the well-known Business Model Canvas for GovTech,” says Frederik. “It’s basically nine steps you should work through and address before you decide if you should really go after a particular piece of GovTech business. These are all things we think about in the enterprise world, but with certain twists and nuances you have to understand if you’re dealing with government.”

Certainly worth doing, though, because the rewards for startups getting it right could be very satisfying indeed. Frederik agrees with a growing number of investors when it comes to the incredible potential of GovTech.

“I look at the tech stack governments are using today, and it’s largely antiquated stuff from the nineties! The tech in the enterprise runs circles around it. Yet the stakes are really high: in fact I would argue that government is the world’s largest enterprise. Governments are often the largest buyers, the largest spenders, the largest revenue collectors and largest employers in a country, city or state. That’s how big an opportunity GovTech is from a market perspective. The potential is huge.”

Critical to that is his firm belief that there’s a widespread willingness from government employees to look at new technology. “I found that the civil servants were extraordinarily willing to talk about new ideas. They were excited that a VC was willing to spend a couple of hours with a police chief of Mountain View or a clerk in San Ramon.

“Are there challenges in closing a deal in government organisations? Yes. You have an ageing generation of people who are still in decision-making roles and may not be so open to change. But the reality is that change is coming, and there are a lot of people in government who are digital natives. And they’re frustrated that they cannot, in their jobs, do things in three clicks like they do in their personal lives. Some are using carbon copy papers, dot matrix printers and green screens.

“But these people need to be part of the conversation, not be forced to bond with new technology.”

That’s exactly where some founders have been missing a trick, says Frederik. And where his specialist Business Model Canvas comes in.

“A surprising number of founders I’ve spoken to were building companies without spending a lot of time with the ideal user profile. They saw an inefficiency and they just decided to build a product around that. In the B2B world that works to some degree, but in government it’s a little bit different. You really need to spend time with those stakeholders!

“There will be complexities in the workflow that a founder may not understand from the outside. How exactly does a piece of paper really move through government? These are questions they need to answer, and I’ve tried to sum all of that up in the GovTech Business Model Canvas. It’s all about doing the right type of research and going through the right steps. Then startups can set up their business for success.”

One last piece of advice Frederik has for founders? Target local, not national, government as your early customers.

“The most strategic go-to-market is at state and local level,” Frederik believes. “Going after national tends to be overly burdensome. Your product road map will end up specifically answering a problem that agency has, with very specific requirements. That can be addictive because they will pay a lot of money for that – but at the end of a six-month deployment you may have a product that you can’t deploy across 100 different departments.

“On the other hand a lot of states or cities – altogether around 89,000 agencies just in the USA, for example – can make decisions on their own. And they’re also the ones who need innovation the most! Go after them and you are developing a product more likely to be widely applicable, because they all have the same sorts of problems.

“I would not likely invest if a federal deal was the only customer the startup had in their early days. It’s really tough to see how that scales.”

Frederik is excited about travelling to Vienna to share his expertise and network at the expanded second edition of GovTech.Pioneers next year, which will take place in the same week as Pioneers’18.

“GovTech.Pioneers sounds like an amazing opportunity. The ecosystem needs more of this, where we bring civil servants, investors and companies all together. And it’s great that it’s on such an international level, because companies in GovTech are going to scale internationally faster than those in the B2B world.”

The Business Model Canvas for GovTech is pictured above and can be downloaded here. Here’s more from Frederik on the nine key areas it walks you through:

Issue/Opportunity — This is the problem that you’re trying to solve. Similar to B2B enterprise startups, GovTech startups are all fundamentally software solutions to existing problems.

Ideal User Profile — This is who you expect to use the product. This may be a single individual, a team, or a group of people. This are the folks your software engineers and product people will spend the most time with iterating over the product. Once you identify the IUP, I recommend you spend a day or two shadowing them — you might be surprised by what you learn.

Stakeholders and Buyers — These are the gatekeepers, and you need to understand who they are in government. This could be a manager, a city manager, another department like procurement or IT. The more complex, the longer the expected sales cycle will be.

Urgency Why now? What’s changed that makes the job of the ideal user profile more difficult? Is there new regulation? A new law? Urgency helps accelerate the go-to-market by creating a pull in the market, it’s ideal that there’s some level of urgency though product strength network effects can help if there isn’t any clear urgency in the market.

Buying Process — Understanding the buyer isn’t all it takes, this is government after all! You also need to understand HOW a purchase is made. Does there need to be an RFP/RFQ? Can you come below a procurement threshold?

Product & Features — This is often where people want to start after they define the issue/opportunity. I urge every GovTech founder not to jump to product. It’s 6th on this list because everything above is key for you to understand before you start writing a single line of code.

Funding — How do you plan to finance your business? Do you know who the players are? At Storm Ventures, we like to fund startups that are just post product market fit. We define this as a company with a few customers buying the product for the same reason. We
urge every GovTech company to always have a line of sight to cash flow breakeven.

Risks & Competition — What are the challenges you expect on the go-to-market? Who are the competitors? What are they doing well and not so well? How are you differentiated?

Thought Leadership — This is something you won’t find on the standard Business Model Canvas, but it’s key. Thought leadership is how you define the “new way” in any new category. It’s likely that the average civil servant hasn’t used a product like the one you want to build, so you need to help civil servants talk about the product you’ve built. You need to create rich content that talks about the benefits. You need to show people what the “new way” is and how to join “the movement.”