By Sophie RabNovember 19, 2018No Comments 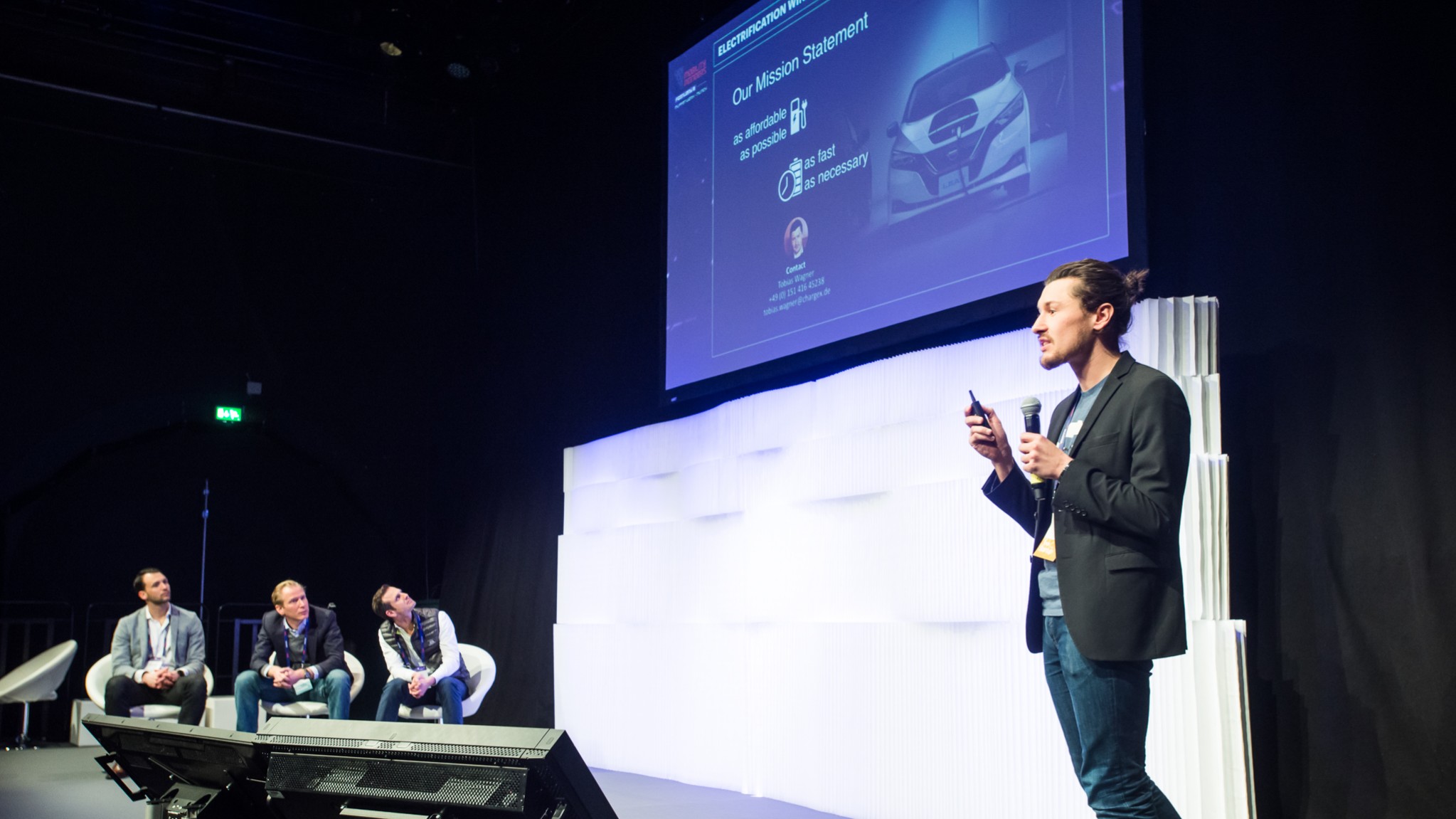 When we talked to ChargeX Co-Founder Tobias Wagner via video interview, we couldn’t help noticing a digital timer affixed to the wall behind him. It was counting down days, hours and minutes. In big red numbers.

“That’s our deadline for CE certification,” smiles Wagner, whose company was working hard to get everything in place for their modular e-vehicle charging solution to get the coveted seal of standards approval for the European Economic Area. The big day, which actually rolls around this week, is just one of the many big milestones in the ChargeX story since Wagner pitched in the finals at the second edition of Mobility.Pioneers back in February.

And if things weren’t busy enough, another landmark came around at the end of last week, when the company finalized a round of funding from a group of business angels, to the value of just over €250K. So clearly the elegance, efficiency and cost-saving of their solution, which lets customers run several charging stations using only the infrastructure and power supply of one ‘master station’, impressed more than just our judging panel in Munich.

While it would be an exaggeration to say that the German startup has had something new to celebrate on a weekly basis, it’s certainly been a year full of positives since they pitched a rough prototype at the Muffatwerk.

“We’re still ashamed of the slides we showed on stage!” admits the Co-Founder, who was one quarter of the ChargeX workforce back then. “But we’ve hit several major milestones since. We’ve finished our design, working together with an agency. Back then we had our first prototype out there but now we have our second iteration of the hardware concept. We’ve also hired another three people and are still looking for more.

“Another of the major things that happened to us after Mobility.Pioneers was working for six months with Volkswagen in Dresden. We moved our whole office there and worked in their Transparent Factory for e-mobility. It was awesome that we were small enough to move our entire operation! They rented us a flat and we really lived our lives there for that period.

“We’re still talking with Volkswagen and have a co-operation. We’re solving a problem for them: if they want to sell electric cars then they need the charging infrastructure – we offer a cost-efficient solution to this.”

After their summer stint in Dresden, the ChargeX crew moved back to their home base in Munich, into a new office that can accommodate their growing team. Which means that once again they won’t have to travel far to return to Mobility.Pioneers. Wagner, for one, is keen to get into the spotlight once more.

“Pitching events are not just about winning,” he points out. “It’s also about the feedback you get. Plus it’s a lot of fun being up there on the stage. We’ll take part again if we’re selected!”

But beneficial as stage time is, says Wagner, that’s only the beginning of what a startup can gain from such an event.

“In the startup area a lot of it’s about collaboration. You can’t revolutionize the world on your own – you need partnerships. Especially for us, because we’re just one part of the mobility value chain. There are a lot of other people involved – installing, operating, infrastructure…we’re just the hardware manufacturer! So networking is hugely important for us. Last year we got a lot of contacts that could be important in the future, and a lot of traction. We’d love to expand our network at this event again.

“We can also give something back, because we have experience from the journey we’ve had so far that we can share. That’s why this event is perfect, because there aren’t many mobility-focused events. Mobility.Pioneers is the best choice for us.”

Another reason ChargeX got so much out of their time at Mobility.Pioneers last year was that they also took part in the hackathon that we run as part of the event. Set to run again in 2019, this gave them the creative space to explore an alternative business model with real potential.

“We had had this in mind beforehand, but used the hackathon’s scheduled time to create an MVP. Our core business is charging infrastructure, but at the hackathon we experimented with a service model for people who don’t have access to a charging infrastructure. This would be some kind of platform approach, where people could hand over their car and it would be charged. This was a good validation and we’re still working on the idea.

“I’d recommend hackathons to every other startup. Take this chance to validate your ideas. It’s always in your mind, these great ideas of revolutionizing the world, but you don’t have time in the office with so many tasks on your core business. So you need to take time out of your daily life to develop ideas like this.”

To attend Mobility.Pioneers on February 7th for free, and be considered to pitch or exhibit, startups should apply here by December 9th.

Applications for the Mobility.Pioneers Hackathon can be made via the Pioneers Discover Open Calls page here – click on ‘hackathon series’.