Exclusive Interview: The Guardians of Truth on the Blockchain! 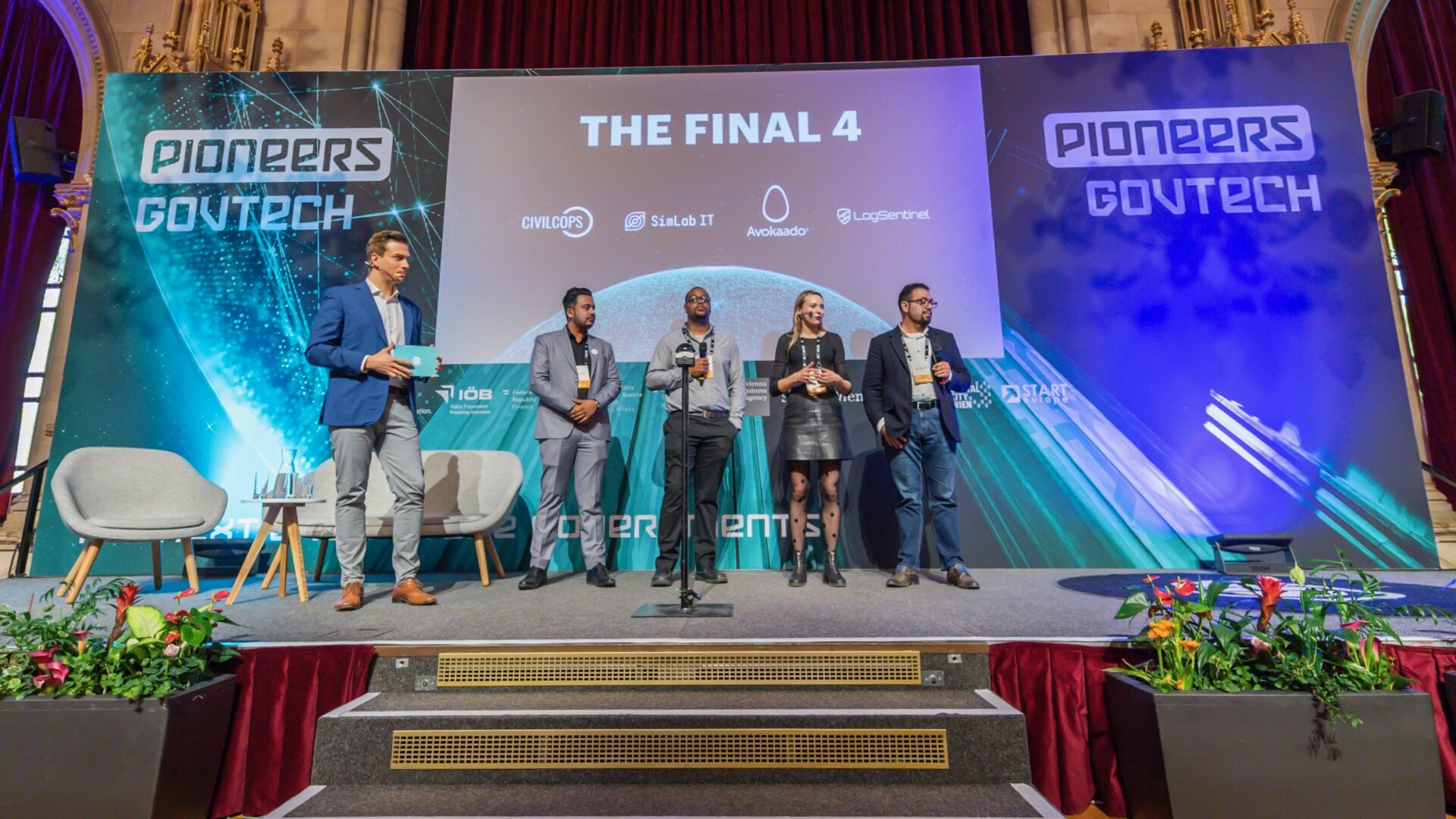 Short, sharp statements really wake up an audience. Catchy lines like ‘We’re the guardians of truth on the Blockchain,’ for example. When Anton Gerunov came up with that gem during the final round at GovTech.Pioneers earlier this month – he’s on the extreme right in the picture – the crowd applauded spontaneously. And it might well have been the line that helped LogSentinel walk off with victory in our latest industry-focused event. Victory that fast-tracked him into a pitching slot at Pioneers ’19 in just a couple of weeks.

It’s notoriously difficult to explain exactly what a Blockchain-based cybersecurity startup does, especially if some of your audience may not be specialists. But our latest experiment with final-round pitching formats certainly inspired the LogSentinel Chief Operations Officer to come up with something that resonated.

“That was a bit of improvisation, I think!” Gerunov told us in an exclusive interview following the event. “We’ve used the concept in our communication before, but not the exact wording.”

Nonetheless, it was arguably the most striking of the responses to the closing ‘Why should you win’ question our jury put to the four finalists at Vienna City Hall. The final-round format was all about answering questions, in fact, with each startup allowed to hit the buzzer a maximum of two times to give an answer to seven open questions from the panel.

For the record, Gerunov managed to buzz fast enough to get his full allocation of two questions. When asked ‘What will make you satisfied in 12 months,’ he explained that LogSentinel wanted to have its ongoing €1m seed round completed and to have turned its POC projects in Asia and the USA into paying customers – as they have already done in Europe.

Again, he’d done well to keep it simple. Sticking to traction and fundraising was a smart response for a startup that had a big challenge when it comes to explaining exactly what it does.

“Our solution is easier to show than to explain,” admits Gerunov. “Blockchain, private and public keys, integrity checks…everybody gets lost!”

Nonetheless, we’ll have a brief stab at outlining what LogSentinel does here. Gerunov takes up the story.

“In the real world, sometimes people do bad things. And in the digital world, people do bad things too! In both cases, they would like to erase their traces. If you’re a murderer, you want to hide your gun. In the digital world it’s the same. What we do is prevent those guys from doing that with advanced Blockchain tech. It’s no longer possible to delete their traces.”

Examples of such skulduggery in a Govtech context? It could be a government employee accessing personal data illegally. Or it could be a bidder trying to ‘edit’ the time of their bid during a tender process for a public contract.

LogSentinel’s premise is that Blockchain’s ledger of transactions makes it much easier to spot when digital bad guys have done something that smells a bit fishy. Erasing activities recorded on the Blockchain is, in theory, not meant to be possible.

Sounds great. But there’s a problem. Namely that you, me and some of the world’s biggest governments and companies don’t generally know how to ‘use’ Blockchain technology at all. Few understand it, so they would have to hire supergeeks to overhaul their systems at massive cost.

This is where LogSentinel comes in. They can integrate all the fancy Blockchain stuff with an existing system, so that the client can reap the security benefits whilst letting all that ‘distributed ledger’ recording happen in the background.

“Our AI can then point our clients to possible anomalies, fraud or criminal behaviour,” continues Gerunov. “We have wrapped all this into a single product. This is a control and command centre for the client’s information security team.”

The basic dashboard would look a little something like this the screenshot below. 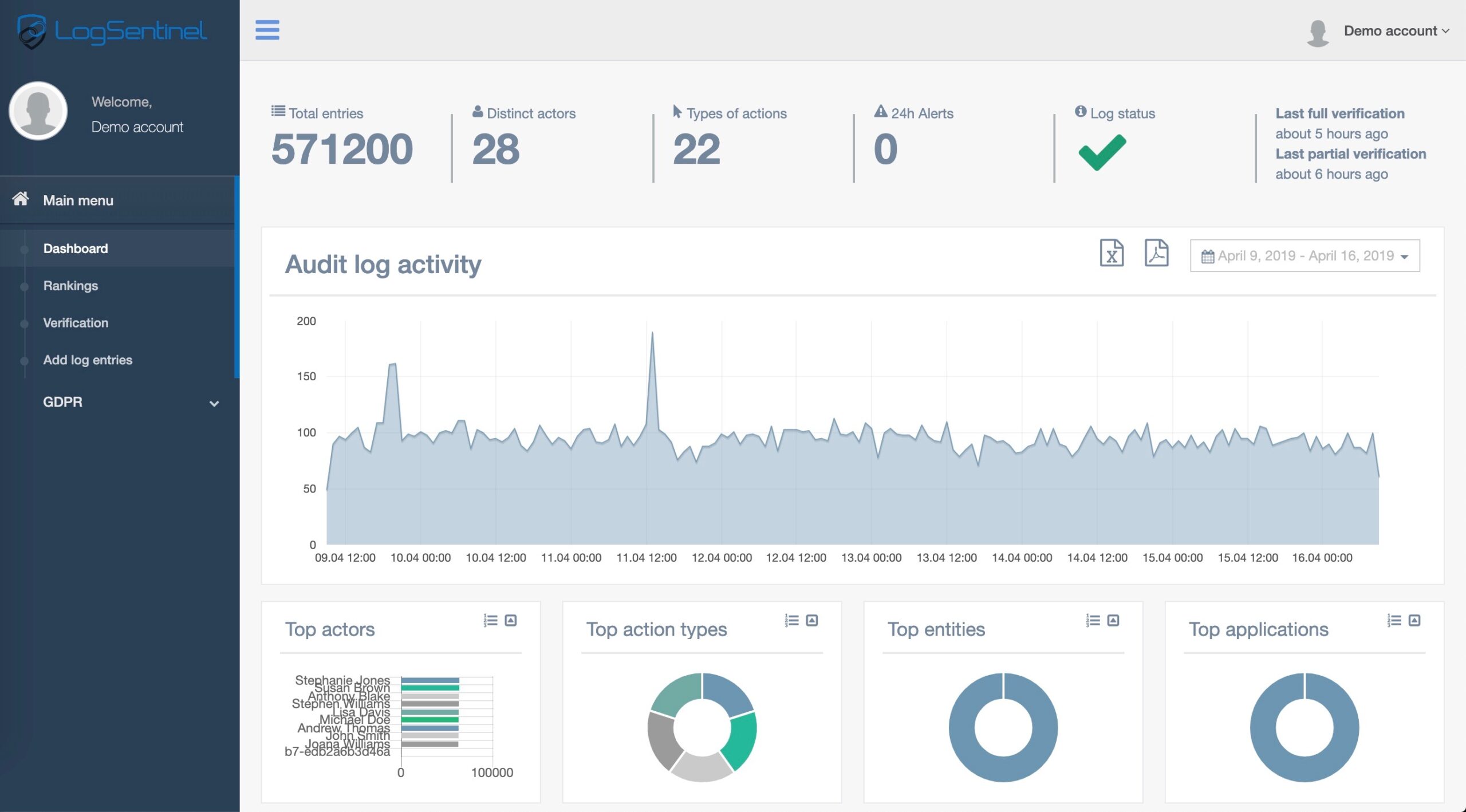 The tick in the top-right corner tells you all is well…but if you were to see red up there, you’d know somebody was up to something! You can head here to check out the actual demo on the LogSentinel website.

The essential offering is that the client can catch digital criminals pretty much in the act. But more than that, the audit trail LogSentinel is constantly creating is designed to be useful for a real prosecution.
“A lot of digital investigations do end up in a real court, looking at a real case,” says Gerunov. “Our product is devised so that the evidence collected in the digital world can be presented in a court. If your SysAdmin has stolen money from you, you don’t want to put them in a digital jail – you want to put them in a real one!”

Returning to the Govtech use cases we mentioned earlier, LogSentinel’s early traction has indeed seen the startup working with the Bulgarian government (and partners) to secure both access to information and the procurement process.

And the boost it got at GovTech.Pioneers will certainly help the startup get deals flowing – especially investment.

“The whole team feels quite excited about this. We’re getting some pretty good publicity, and a bit more recognition on the European scene. People need to know that this is the technological way to do the right thing, and this publicity enables us to evangelize that better.

“We’re currently trying to close our seed round – and this has given our potential investors some very good signals. We’re looking at concrete term sheets with investors, and of course they are asking things like ‘Is it only you guys and your ten or 15 customers who think it’s a good thing? Is it a validated concept?’ Winning GovTech.Pioneers gives them a positive signal that the product makes sense and we can go global.”

One thing we probably don’t need to explain here is that such a cybersecurity solution has applications well beyond Govtech. That’s something Gerunov will have in mind as he gets set to pitch to the more general audience (including many corporates) at our flagship event next month. He’ll have 49 other startups to beat, but if he keeps the smart answers coming, then he’s in with a good chance!

Want to meet LogSentinel and over 500 other remarkable startups at our flagship event? Click here to join us at Pioneers ’19 on May 9th-10th.

Pioneers ’19 is supported by Google, Mercedes and PwC Austria.