What Makes a Winning Startup? 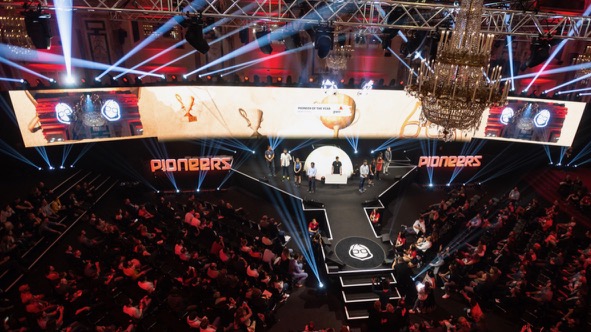 By Jasmina Henniova, Head of Startups & Community Partnerships at Pioneers

When Storyball was announced as the winner of Pioneers ’19 it was the culmination of an extensive selection process that ran over a period of several weeks.

After pre-selecting the best 500 startups to invite, we chose the best 50 to pitch at the event, where we further narrowed it down to eight finalists. We’ve been told this year’s Top 8 was the best batch we’ve ever had – no wonder their final pitches on the Arena Stage were followed by one of the hottest jury debates we’ve seen. So how did we arrive at the ultimate winner?

As part of my role at Pioneers, I was there throughout the process and also moderated the final jury discussion. Later in this article I’ll give you a glimpse of just what went on in that jury room. But first, let me outline the framework and criteria we use throughout the full process – something we’ve never published before.

For our flagship event there are no fewer than six selection phases – and this has become standard procedure for most of our pitching events.

To avoid the subjectivity and errors associated with human judgement, our first step is to get help from a third-party smart algorithm. This allows us to make a first divide between the best applications and those that are probably less strong.

The second step is for our in-house Startups Team to go through the applications manually. We double-check every application and invite the best 500 startups to join us for free at the event. Those who accept get a pair of tickets and progress to round three.

Together with our community of dedicated partners and a team of our own innovation consultants, we rate each of the 500 confirmed startups on the following criteria: team, traction, product, market and pioneering factor. Those who read our FAQ ahead of the event will know that the criteria here are not entirely secret – although the criteria guidelines and the exact way in which our scoring system weights each of them is! What we can reveal though is that every criterion is scored with a star rating on a scale of one to six. To further avoid subjectivity, every ‘star level’ for each criterion has its own detailed definition.

A day-long workshop follows in which we pick the best 50 startups to pitch at the event, based on the internal and external ratings. Here the startups are also clustered into seven appropriate pitching sessions for the event.

Pioneers ’19 is here! After going through a mentoring program, our top 50 startups pitch during the seven pitching sessions on the first day of the event. Each session has its own jury composed of a diverse mix of experts and key players from the startup ecosystem, including representatives from prominent VC funds and accelerators. They rate the startups on the same criteria as in step three, in real time and using tablets. Last but not least, one Wild Card startup is picked by the audience at the end of the first day, resulting in the eight finalists who go to the last round on day two.

This is the moment of the truth. The eight finalists, selected from over a thousand applications, pitch on the main stage. A jury of six (below) again uses the same rating criteria as in rounds three and five. Then, after the show is over, a wild discussion starts in backstage to pick the winner! 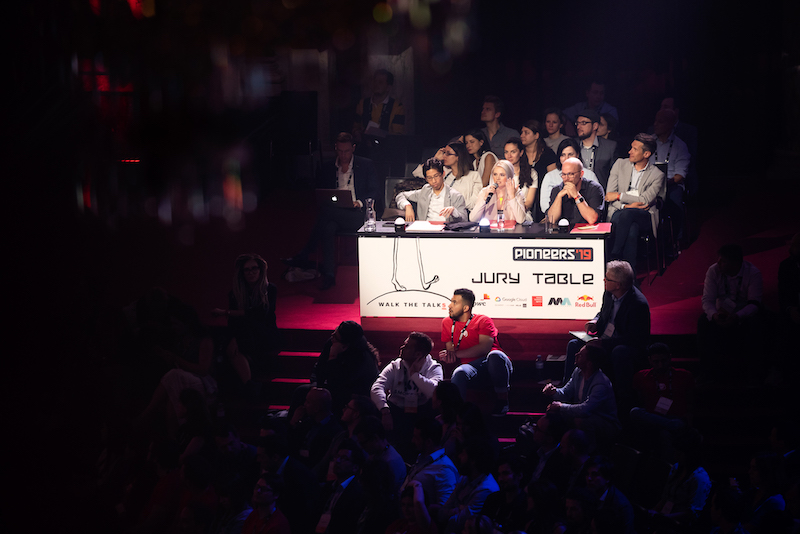 This process has been tweaked a little every year and continuously improved based on lessons learned. Every stage of the process is managed through Piobay, our online dealflow management tool, and FlashRate, the startup evaluation software we’ve specifically designed for juries at pitching sessions. It’s the latter the juries use on their tablets during rounds five and six.

You probably still have a couple of burning questions, right? How did that jury debate at Pioneers ’19 go? And if there’s a scientific scoring system and software, why do we need a debate at the end at all?

To answer the second question first, we typically use the star rating system as a framework for a follow-up debate at each stage. Especially when it comes to the finals, we do prefer to rely on the ultimate conclusions of our selected experts. Such discussions are never easy, as every juror has a strong opinion and there is no objective right or wrong!

At Pioneers ’19 the scores registered on FlashRate were extremely close – and the top two startups were in fact tied. That made the discussion even more lively – and without a clear consensus, a final vote had to be held amongst the panelists. The reality is that all the startups in the finals had checked the quality box and any of them would have been worthy winners. In the end it was storytelling and that little ‘x factor’ Storyball left in the memory of the jurors that proved to be decisive. Our final two rounds are a pitching contest after all!