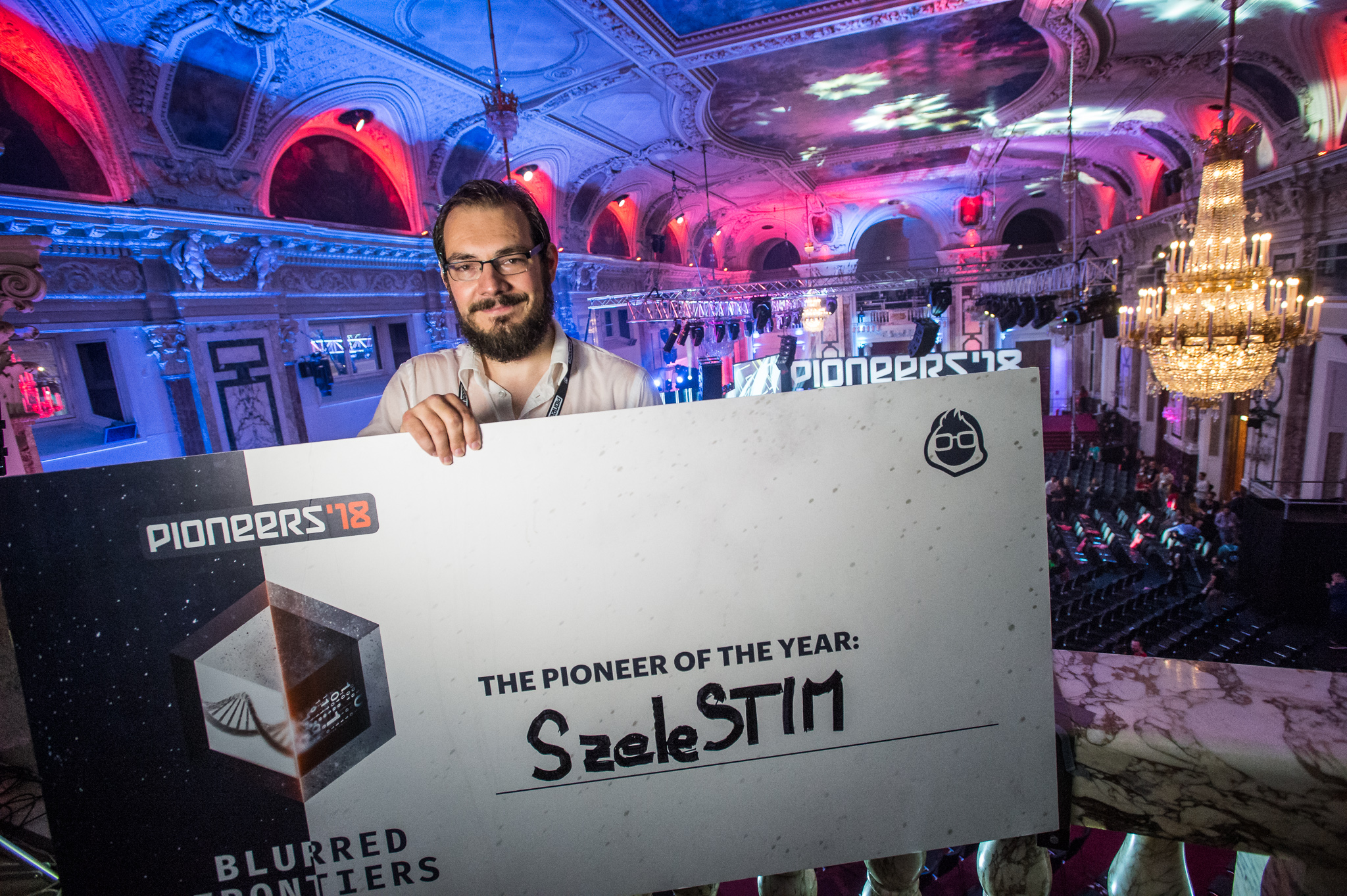 It takes an extraordinary startup to see off 50 other hopefuls and win the annual Pioneers Challenge Award at our flagship event in Vienna. And with an idea that has its roots in the 1980s and its unusual mix of founders, it’s fair to say that SzeleSTIM ticks that box loud and clear.

The brains behind the technology certainly doesn’t fit the usual founder age bracket. Jozsef Szeles, born in Hungary, but who made his medical name in Vienna decades ago, is in his sixties. Also unusual is that he’s held patents relevant to the startup’s exciting new pain therapy device for about three decades!

SzeleSTIM’s earpiece, which the company is preparing for CEE approval towards the end of the year, delivers auricular (via the ear) treatment via a steady rhythm of electrical pulses designed to stimulate the pain-critical vagus nerve. While that’s not an entirely new idea – in fact the same group has already marketed such a device under the Multisana brand – the idea of developing one that can be tailored to each patient is SzeleSTIM’s USP.

“What we do is minimally invasive, so we don’t need to implant anything,” says co-founder Stefan Kampusch, who pitched his way to success on the Arena Stage last week. “But we’re still directly triggering the brain, because we’re stimulating in the ear, where there is a nerve that goes directly to the brain.

“That’s the vagus nerve, which controls nearly everything in the body. It’s very powerful and one of the most important: a cranial nerve that comes down directly from the brain and goes to the lungs, the heart, the gut and all the way to the colon.

“The vagus nerve transports information from the organs to the brain, and it’s very important in telling the brain if everything is OK. If anything is damaged, you get a ‘something is wrong’ signal. But if you can put the right signals on this nerve, then you have the gateway to the brain.

“So we can help the brain when it comes to regulating the pain. This is done by blocking the pain, or helping the body to release its own ‘opiates’ such as endorphins and enkephalins.”

“Our new device works with on and off cycles, which are also individual. Everybody needs different cycles. Our device tries to measure when it should be stimulating, and when it should not. The doctor would give you the device, send you home and you’d wear it day and night.Then you’d come again in around ten days – when the doctor checks the status. And then you get the next device.”

As is typical in the life sciences, the build-up to this point has been long and steady. Kampusch got involved in researching this technology in 2009 as a Vienna Technical University student, where his professor was Eugenijus Kaniusas – now also a co-founder of SzeleSTIM. In 2013, with Kampusch providing the real drive to turn all this research into a viable business, SzeleSTIM was founded. And now, on the back of Pioneers’18 success, they’re almost ready to move from prototype to production.

“We’ve already tested enough to know that it’s safe, and although, it’s not yet approved we have prepared everything necessary for the CEE marking. We’re now aiming for full production and investing in tools to make this a manufactured product. We want to get this done by the end of the year and then we’ll submit for certification – when the product is absolutely final.”

Investors, though, have already seen enough: SzeleSTIM is currently closing a funding round. Right now building up a customer base is a priority, and that’s where Kampusch says the trip to Silicon Valley will play a role.

“I’m sure Pioneers has a huge network, and we’ll try to make the best of that for our business,” he said. “We definitely want to expand to the US, so it’s very important for us to go there to get some connections in Silicon Valley. We know we’ll need more funding later on, but this round will be enough for us to go to market. We want to build up Austria and Switzerland on our own, and then try to find licensing partners.

“I think we’re addressing a real problem here,” concluded Kampusch, pointing to the most likely reason nobody on our five-strong jury gave SzeleSTIM a score of less than four out of five after his pitch. “Everybody has had pain; everybody knows somebody who has had pain or even chronic pain. Everybody has a relation to this topic and knows it’s very severe.”