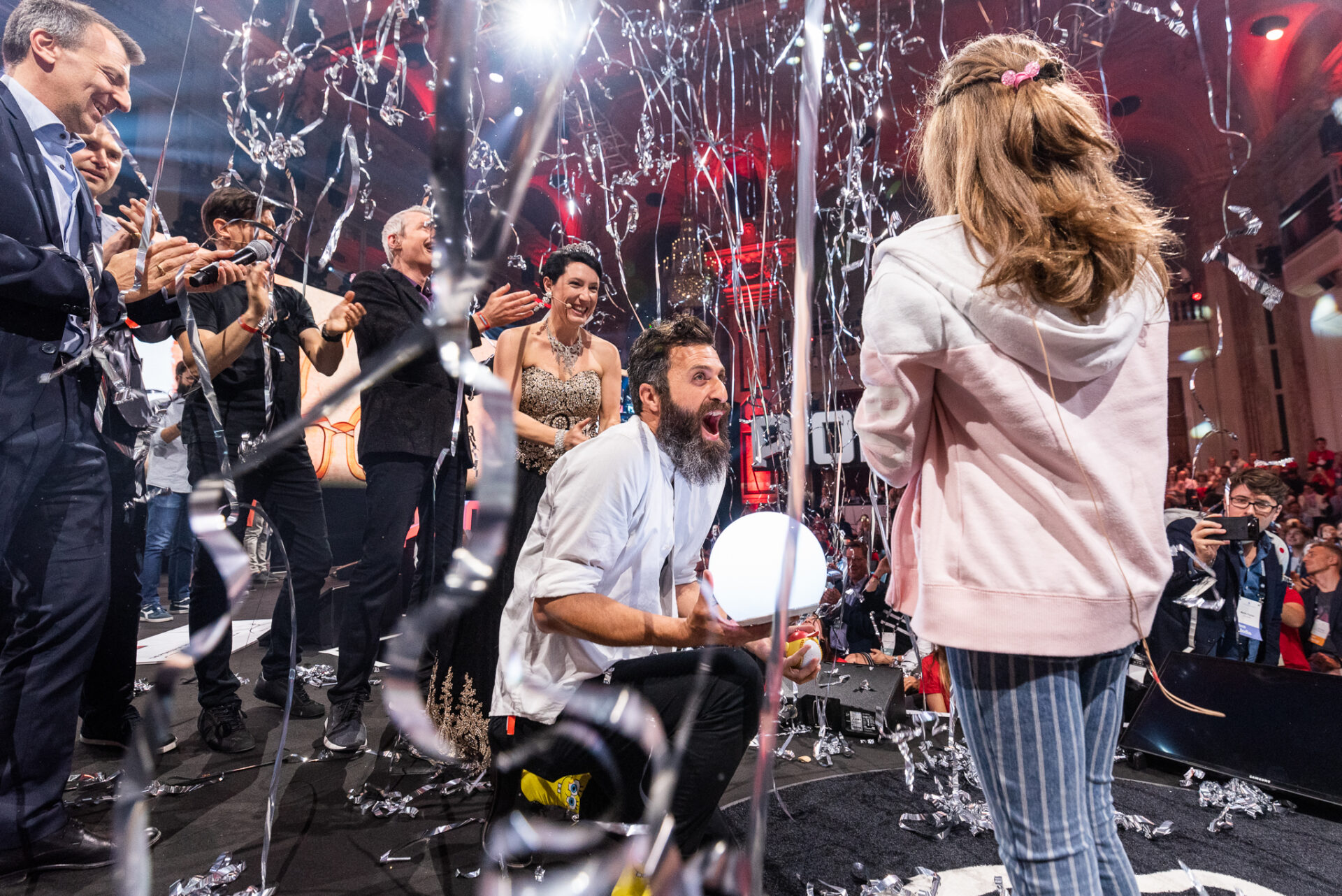 Storyball beat 50 top-notch challengers to emerge as the winner of the coveted Pioneers Challenge Award at Pioneers ’19 on May 9th-10th. The Israeli startup pitched a physical product of the same name, which is a smart toy that gets children away from screens and playing in the real world. The spherical toy uses games, stories and challenges to get children physically playing and moving – without looking at a screen.

The startup has won a networking trip to Silicon Valley to meet the most influential people in the Californian tech hub, as well as a Talent Garden Flex membership and a video pitch professionally filmed by Austrian television network Puls4.

Storyball’s Chief Product Officer Meir Biron, with his long beard and bright yellow socks, was certainly the most noticeable of the eight finalists that pitched on stage at the end of the second day. And it was perhaps no coincidence that he was the only one to bring his product on stage – he even went so far as to toss a balls to the curious jury. In fact, Storyball was the third consecutive winner of our flagship event to have physically shown their work in the final round.

But what ultimately scored victory was perhaps the commercial potential of a product that is bound to attract the attention of parents who can’t work out the best way to let their kids grow up in a world of digital screens. That, and the fact that Storyball’s approach represents a really innovative take on their industry.

“I hope we came across with a message that technology can be served in a different way, and that going screen-free is something parents can think about,” said Biton. “I hope we’ll see more real-life experiences coming out, not just digital interfaces.

“I think people really want to see how technology can engage us more and make us feel more, rather than just consuming the bigger and better things. It’s about the purpose of what you’re doing, not just how you’re doing it.

The quality of this year’s finalists was something that struck even the happy winner.

“I don’t envy the jury at all – it was probably a really hard selection for them! All those eight founders are doing something that’s really revolutionizing the world. It’s an honour to be selected but all the other eight would have deserved it as well.”

Each of the remaining Top 8 finalists have won a Talent Garden Club membership for one team member for a year.

A total of 1209 startups applied for the event, with 500 selected free tickets. From these, the 50 pitching startups were hand-chosen to present their technologies at Pioneers ’19.

The ninth edition of our flagship event saw 2,500 tech innovators, 550 startups and a host of top speakers come together to go beyond the tech hype under the ‘Walk The Talks’ theme.