Pioneers Insights: Plastic And The Power Of Printed Electronics

By Sophie RabDecember 10, 2018No Comments 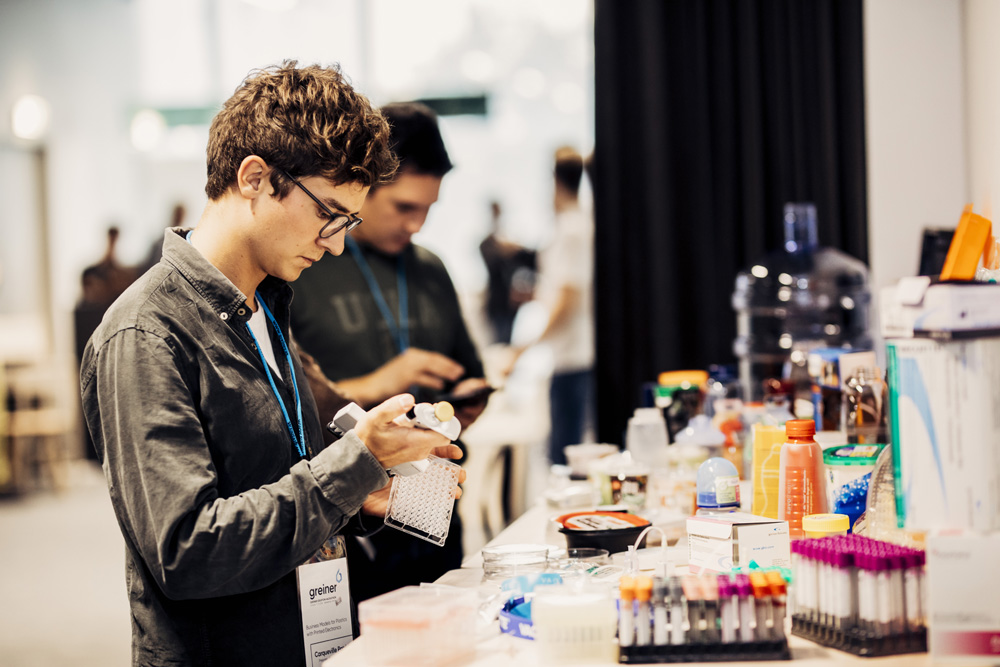 Like it or not, plastic is woven into the fabric of our lives. But it took a visit to the Greiner Ideation Hackathon in October for a non-specialist like myself to understand a blooming technology that effectively weaves information into the fabric of plastic.

The ideation format went down a treat with both our partner Greiner and the participating startups, which were selected by hackathon organiser Pioneers Discover. Its unique feature was the absence of specifically-defined problems or challenges for the participants to solve. Rather, it was a free playground to discover any potential ways for printed electronics to integrate with Greiner plastic products, which range from yoghurt containers to shampoo bottles to shower heads.

(While plastic is undeniably a dirty word these days, it’s worth mentioning that our 150-year-old partner Greiner is working hard to use less of it. Just a month after the hackathon, in fact, Greiner Packaging received a Special Innovation Award at the Austrian Smart Packaging Awards.)

Ultimately it was German company Prismade that took honours at the hackathon, with its experienced crew impressing Greiner by showing how invisible conductive ink could be used to embed interactive ID tags in plastic.

That’s a bunch of long words again, we know. But let’s try and unpack it a little. In essence, printed electronics is about using inks that can give a material ‘smart’ abilities, for example allowing the surface of a bottle to function as a next-level QR code or measure its own liquid levels.

‘Printed electronics’ is somewhat misleading, because we non-specialists tend to associate the word with some kind of visible outcome. But, although you’d be using printing technology to get to that interactivity you want in your physical product, don’t always expect to see it with your eyes. As the presence of ‘invisible ink’ in Prismade’s solution makes abundantly clear!

Nonetheless, printed electronics is not a new concept. Prismade’s founders have in fact been tinkering around with its potential since 2004. It’s been seen already in other materials, with plastic having been considered a tougher nut to crack until recently.

Still, we had a bunch of burning questions for Prismade Co-Founder Jan Thiele when we interviewed him. Why would you want this? Are we solving a real problem with printed electronics or is it just another nifty way for milk bottles to play cartoons for the kids? If so, what’s wrong with a QR code anyway? And if there’s more to it, how big a potential are we talking here?

“Marketing applications are just a minor additional thing with printed electronics,” says Thiele. “The real benefit for our technology is the added level of security. In Asia, South America and Africa, for example, there’s quite a big issue with counterfeit pharmaceuticals. With our tech the consumer can easily make sure they have an original product.

“Right now you would use a hologram, but consumers don’t know what a hologram is actually meant to look like! Now your smartphone can tell you it’s the correct product. Plus you can add value like a digital leaflet or video. With serious applications like this the long-term value is much higher.”

With plastic banknotes also growing in popularity, perhaps there could be a serious application in terms of spotting counterfeit money too. (Trust me, getting a fake 50-Peso note for change in a Mexico City is enough to spoil a morning!)

Even holograms themselves could be made more effective, says Thiele. “One application could be an interactive hologram, where you don’t need to know how the real one looks like, but instead your smartphone can verify it for you. And since it is electronic and not optical (like a QR code) it’s very hard to copy.”
Another interesting possibility he points out would be the (always exciting) prospect of eliminating a few PIN’s and passwords from our lives.

“Placed inside a credit card, printed electronics technology could serve as a separate PIN code to verify any type of transaction. This means that you need to have the real card placed on your smartphone. Just knowing someone else’s credit card data won’t be enough to shop online.”

There’s a whole extra article you could write about that, given that technology in general seems to be moving away from physical, and one might have assumed we wouldn’t have cards at all in the near future. Also, there needs to be a commonsense system in place (still a roadblock for many services) for anyone who has lost or broken their phone to still get money. Plus, what about the millions of people who can’t afford a smartphone? Technology that makes the rich richer (and more securely so) should be debated.

Returning from that aside, the advantage over something like a QR code is pretty clear in these examples. “Whenever you want to put value into a product so that you don’t want people to copy it, then you can’t use optical systems any more,” says Thiele.

He also points out that conductive ink has both a cost and environmental edge over another secure alternative, the RFD chip.

“If you want more security, you could choose an RFD chip…but this comes with a drastically higher cost for the chip. And what most people don’t consider is the electronics waste. A simple piece of paper would become electronics waste. And there are regulatory implications for manufacturers. So that’s unthinkable for mass markets.”

If you’re not convinced that any of this is real problem-solving, consider the solution from one of the other finalist teams at the hackathon. Mechatronics graduates Christoph Beisteiner and Dominik Hofer, entered as MedGauge, used printed electronics to make a plastic container smart enough to monitor how much liquid is inside it.

The application in mind was a hospital, where levels in urine or infusion bags could be digitally monitored, eliminating the work and error potential that comes with the traditional nurse-and-clipboard method. And like with Prismade, their concept would integrate seamlessly with existing Greiner production lines. According to MedGuage they would print a “resonant sensor structure” on the surface, merely “replacing coloured ink with conductive ink.”

Clearly there is plenty to talk about when it comes to the potential impact of printed electronics, particularly with plastic. Thinking of its further applications is a fun challenge that has no limits, and it’s certainly possible to imagine it as something that creeps into our lives in the fairly near future.

Whatever the long-term potential of printed electronics, one thing’s for certain: the fact that showing a working product is always going to give you an edge at a hackathon. Especially if it fits well into legacy systems.

“One of the reasons I think we won was that we could prove everything we showed would be available now,” concludes Thiele. “We used a yoghurt container to show Greiner that you could put this invisible electronic code into the plastic directly, making an interactive product by using conductive ink. And they understood that this is really feasible with the machines they already have.”

Startups with something to offer in printed electronics should consider applying for the LOPEC Startup Island in Munich on March 20th-21st next year. They can do so via the Pioneers Discover Open Calls page here.