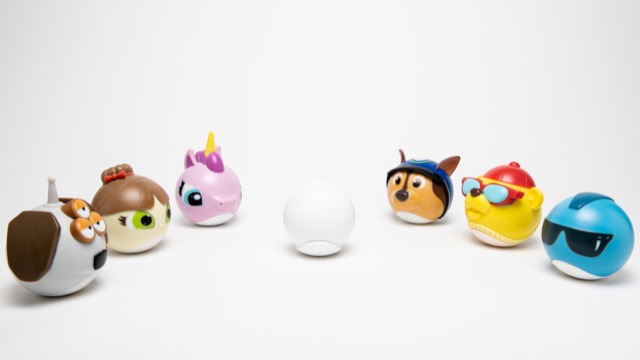 “Storyball is basically a bluetooth speaker,” says Meir Biton, one of four men behind the product that won his company startup honours at Pioneers ’19. “If you wanted to, you could pair it to your phone and run Siri or Alexa through it.”

Unlike most bluetooth speakers, a Storyball is designed to engage kids with its presentation. Depending on which ‘skin’ you pull over it, it could become a dog named Skye or a bear called Pepper. Alternatively, a spy operating as Agent Ayo. Or if you’re really lucky, Sesame the Splendid Unicorn! (Get a feel for them in the picture below) Later in the year, there’ll also be characters from hit kids’ television series PAW Patrol. 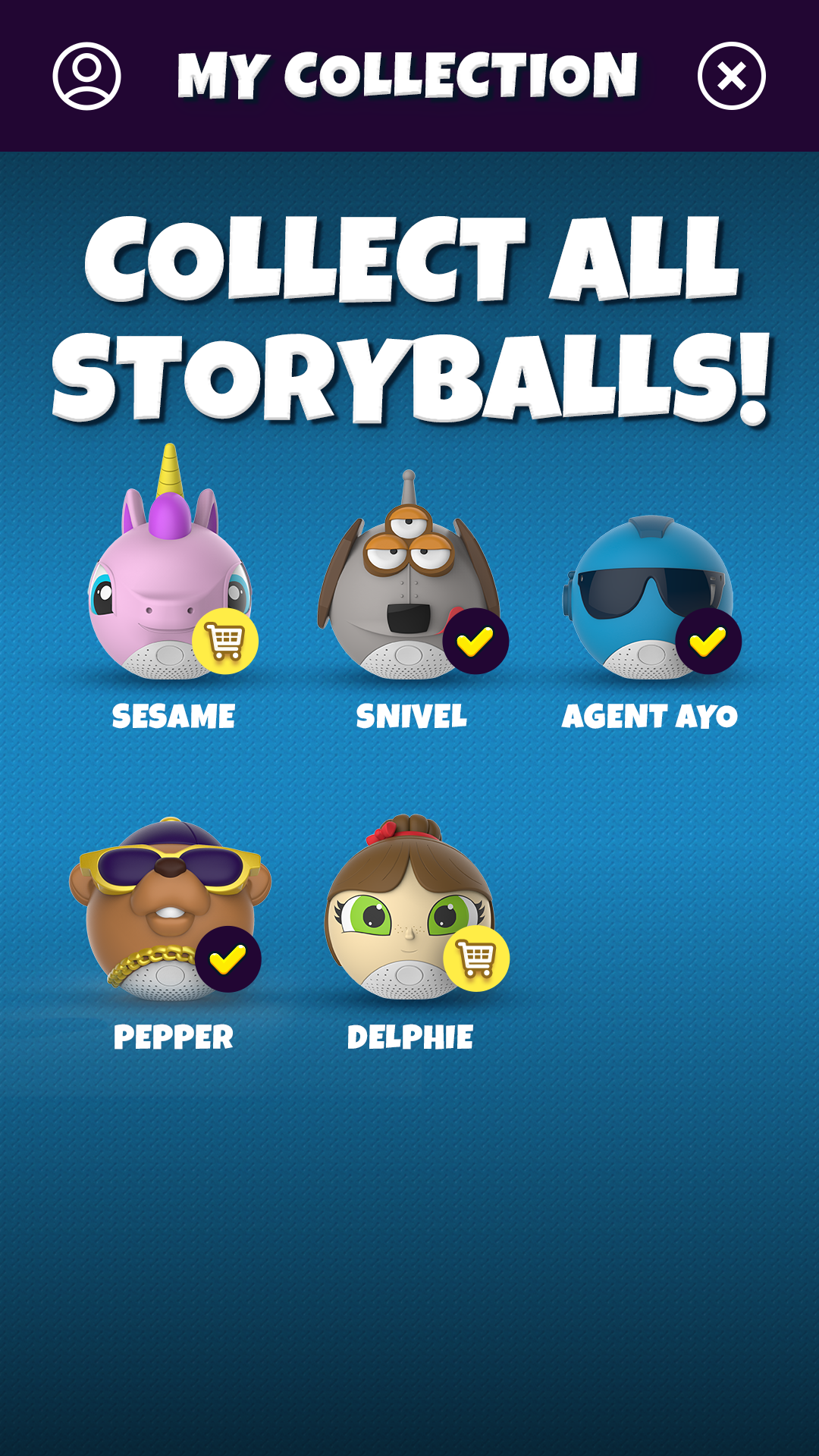 Okay, so it’s a bluetooth speaker with a pretty shell. And it’s designed to be thrown around (as it was during final pitching at the Hofburg) or withstand bouncing down a staircase. Very colourful and certainly kid-friendly, to be sure. But there has to be something more to this $69 smart toy, doesn’t there?

What does ‘smart’ actually mean? This is what we really wanted to understand from Biton, one of the four Co-Founders at Storyball, when we chased him down in China for an interview.

The ‘smart’ part isn’t that the ball can say things or make noises. Nor even that it can flash or vibrate. It’s the ability it has to respond to movements or actions, and to do so in a way that makes sense within an ongoing game narrative.

Here’s a simple example. You ‘dress’ the Storyball – as Sesame or Pepper, say – and then choose a relevant game or a quest on the Storyball app, which is paired to the toy via bluetooth. From that point on, the toy (voiced by Sesame or Pepper) will run the game directly with the child. The first step might be a challenge to run away from bad guys or catch a fish. When the child runs with the Storyball, its motion sensors know that it’s happening. Likewise when the child mimics the throw of a fishing line with the ball in hand, the motion sensors know that too. It can then respond with something appropriate that takes the game forward – perhaps a command to run further or the vibration of a fish biting.

This responsiveness is the Storyball’s ‘core’ offering. The startup hasn’t invented something new, but created a unique hybrid out of existing tech – and the potent ingredient that is a child’s imagination.

“This is technology that exists,” says Biton. “Motion sensors and smart algorithms, for example. It’s more about how we translated the game. We can know so much about what you’re doing with the ball and what’s going on around the ball that it really makes you feel as if it’s alive.

“It took us a long time to refine the game play – a lot of that is about the responsiveness of the ball. When it lights up or vibrates at the exact right moment or makes the right sound effect or says the right words. These are the things that make the experience, which is a narrative that makes you want to play and be a part of it.”

The central idea is to help get kids up off the floor, moving around in the physical world and away from staring at tablets and phones all day long. Storyball’s games can to be used by groups of friends, not just solo, so there’s a social aspect too.

Now, if you’re an adult reading this, you might well be thinking, ‘Well, if my child needs to get away from screens and into the real world, why can’t he just throw a regular ball with his friends? That’s all I needed when I was a kid!’ This is a more than valid question. But a trend is a trend, says Biton, and a ball turning digital is simply a sign of the times.

“If the mobile phone was a change for our generation, now the fact that objects are digital is a similar change. Physical and digital games that have a presence in real life, yet where objects start to become more digital…it’s going crazy.

“When we take toys and give them life, we give them ability to interact with the kids differently. This is our biggest market: toys that are responsive, interactive and especially solving the issue that kids are sitting in front of screens all the time.”

It’s worth remembering how utterly (and understandably) clueless the parents of 2019 are when it comes to deciding what sort of digital diet their kids should grow up with. They’re torn between ensuring their offspring will be equipped for a digital job market and seeing their kids getting outside and doing real stuff under the sun. With busy lives to lead, many are constantly fighting the temptation to use iPads as babysitters. Something like Storyball could look a good compromise to them.

It might also be fair to say that a lot of kids are more likely to listen to a fun character they can identify with than their parents. And perhaps they’re also more likely to stay engaged for a length of time.

Therein lies what might be a stroke of commercial genius. Storyball’s own characters are cute and collectible personalities – the kind of thing your kids might nag you for when present-buying season rolls around. The PAW Patrol characters are ones they’ve seen on television – hero dogs that children already know and more than likely trust to lead them through a game. No wonder Storyball and Nickelodeon have already found synergies there: the Tel Aviv startup and the American network are working hard on getting PAW Patrol content and ‘skins’ ready for September. It’s not hard to see how scaleable the idea of pairing with established kids’ brands could be.

Storyball had already pivoted once. When Biton and a couple of former school chums began working on it in 2016, it was a device to help patients with physiotherapeutic rehabilitation.

“Initially it was used for regaining motor skills. You had to use it with an app and it would measure different kinds of movements. We started with a very basic ball, with the screen telling the user to do things that were more than the ball ‘understood’.

“Then we put a speaker inside the ball, added a face to it, gave it voice and personality. The product became so engaging and so much fun. We saw the potential to use more of the tech skills we have to our advantage. That’s the moment we pivoted.

“We try to give gaming a positive and social-friendly aspect. There are a lot of rewards in the game that make you want to come back. And the good thing is that you are coming back to do things that are positive – running, jumping or passing the ball between two friends.”

Given that the investor-heavy judging panel at Pioneers ’19 voted for Storyball as their winner, it may come as no surprise that the startup’s funding is proceeding apace. Having completed a $500K pre-seed round shortly before Pioneers ’19, Storyball is already more than halfway towards securing a seed round of $1.3 million.

Victory in our startup competition will only accelerate that progress. Biton also says content in German is a step closer thanks to conversations they had at the Hofburg.

“For us Pioneers is the most exciting and strongest community in Europe. It was my first time there and I saw a very intelligent and digital community, as well as a very creative scene. There were a lot of brilliant startups, but you could also see things like drummers and opera singers that were creative. And edgy and innovative things that we really liked, like Adam Cheyer’s talk on Bixby Developer. I’ve been to startup events before but this one has very good connections and a strong vibe.”

If you’re looking to get a Storyball, this is where you can order one. And here’s a video showing it in action!

Wondering where Storyball might be in three years? Check out the recent good news for our 2016 flagship event winner here.