The Story of Pioneers ’19: Day One 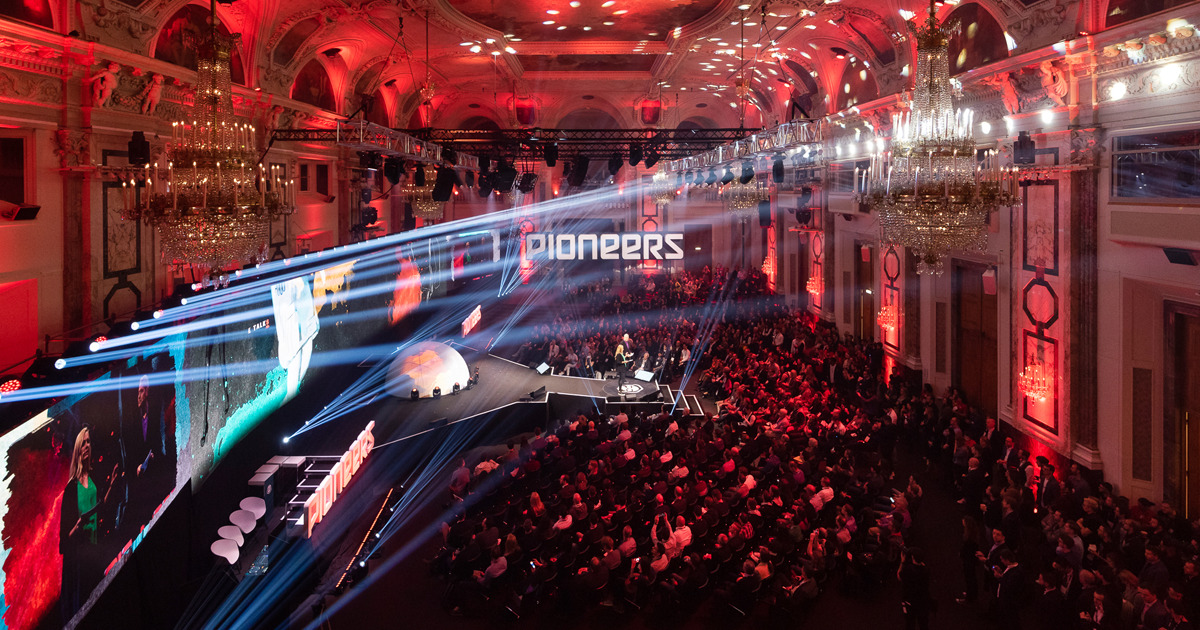 As the dust settles on Storyball’s startup victory at Pioneers ’19, which took place in Vienna last week (May 9th-10th), it’s time to reflect on the first of two magic days at the Hofburg.

Our flagship event’s ‘technological journey through life’ began with a look at the biggest picture of them all: space and humanity’s place in the universe. First, Pete Worden shared the latest on the Breakthrough Foundation’s search for life in Alpha Centauri, our neighbouring galaxy. NASA’s Kerry McGuire gave a fascinating talk on the ways in which automated systems can help astronauts deal with technical issues in the era of interplanetary travel, when response times from support on Earth could be as long as 44 minutes.

In a panel discussion featuring Worden, NASA’s Chief Innovation Officer Omar Hatamleh and Jayne Poynter (World View), there was a general agreement that humans could indeed become a transplanetary species in the future. “I thought we would be on Mars already!” said Poynter.

As the theme moved onto topics around the building blocks of our lives, Erik Gatenholm of CELLINK showed his company’s contribution to 3D bioprinting technology. “We’ve launched the most cost-effective bioprinter in the world, and are selling it for $5000,” he said. “That has really impacted the field, and we’ve seen it used to print human skin, hearts, muscles and corneas.”

After lunch (appropriately enough) the Arena Stage tackled the topic of food – and more specifically the idea of producing it artificially. Mark Post, the man behind the world’s first lab-grown hamburger, took the spotlight here, sharing more about how we can ease the burden on nature through biotech.

Later in the afternoon, Siri creator Adam Cheyer returned to his favourite stage to give Bixby Studio its global debut. Backed by Samsung, this is his next-generation tool which allows almost anybody to harness the power of machine learning to build a personal assistant. This would give smaller players a chance to create an assistant that isn’t ‘baked-into’ a huge corporation’s environment in the way that Alexa, Siri and others are. This would democratize the space and allow consumers assistant that really has their interests at heart.

“If you’re a third party in the virtual assistant world, you are a second-class citizen,” said Cheyer. “You do not have the tools a developer at Amazon has. We want to change that.”

After this premiere, the Hofburg was treated to next-level virtual reality as Varjo’s Niko Eiden showed off how his company has achieved human-eye resolution.

Oriente’s Geoffrey Prentice then took to the stage to share more about how his explosive company is bringing credit to the ‘unbanked’ in Indonesia and the Philippines.

“The demographics and the growth rates in South-East Asia are fantastic,” he said. “It’s a younger market even than China, and has an optimism that’s really fun to be a part of. I’m surprised more Western companies haven’t gotten involved in it yet.”

Then Blockchain came under focus, with Ian Khan (Futuracy) and Wikipedia Co-Founder Larry Sanger starring in a panel discussion that highlighted some of the real benefits of the technology. These include tackling fraud, breaking the trend towards centralization (especially of data) and preserving both truth and democracy. And they’re all independent of cryptocurrency hype. “Bitcoin is not Blockchain,” said Khan, “and I’m on a mission to separate the two.”

Then it was time to learn more about Non-Fungible Tokens, as eloquently explained by Yat Siu of Animoca Brands. His Fireside Chat with ex-Pioneer Rebecca Martin (now of Money20/20) touched on where the phenomenon of digital assets (for example ‘CryptoKitties’) might lead us. Among other things, that world could include your kids getting way richer than you before their ninth birthdays…

Talks aside, stage novelties included cyborg drummer Moon Ribas delivering a rendition of seismic activities in Austria since 1970 that gripped the audience for six minutes, and a futuristic fashion show by designer Anouk Wipprecht.

Head here to find out how day two at Pioneers ’19 played out!

For more on how Storyball won the startup competition at Pioneers ’19, click here.