A Peek Behind The Scenes At Pioneers’18 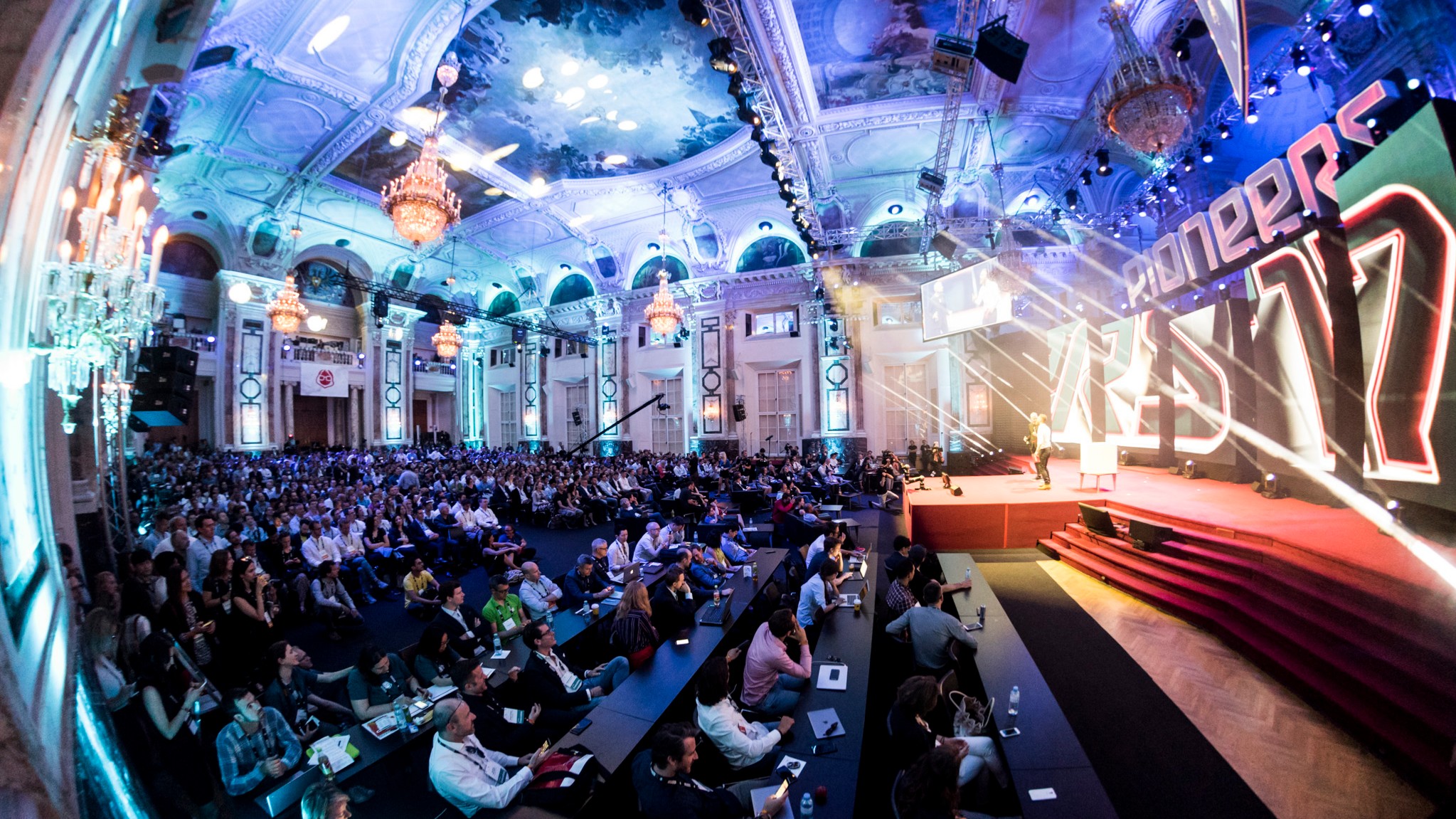 If you’ve been to our flagship event at the Hofburg before, you might have some idea of just what an undertaking it must be to transform a 500-year-old palace into the venue for a cutting-edge innovation event, including four stages, networking areas, workshop spaces, exhibition areas, media and speaker lounges, and of course a makeshift kitchen and dining area for 2,500 people!

We’ve been working with our local partner Media Apparat since even before we began staging our event at the Hofburg in 2012. They’re primarily responsible for the full set-up of the venue, including stage, sound and lighting. This year they’ve got an extra challenge in the shape of a new-look Arena Stage: let’s just say you’ll be watching your keynote speakers and final pitching for the Pioneers Challenge Award from a very different angle in 2018!

“This year we’re giving the stage much more of an ‘arena’ feeling,” says Andreas Göltl, CEO of Media Apparat, who has overseen their operations at the Hofburg in recent years. “One thing the audience might not know is that different parts of the ballroom have different weight restrictions. Where the stage is going to be this year has a lower restriction, so this has meant a complete redesign for us.”

Still, there’ll be a solid eight tonnes of equipment arriving in four trucks when setup begins on the Monday of event week. The first couple of days see the most manpower involved, with around 80 people on site from Media Apparat and their partner companies. And that doesn’t even include our own Pioneers Events operations team, which deals with every logistical detail as well as liaising closely with Media Apparat.

“This is our biggest and most important project every year,” continues Göltl, whose company works on around 120 events annually. “It’s a difficult thing to produce this event in such an old building, which is probably the most famous in Austria. The new stage layout is something that hasn’t been done at the Hofburg before and means we now need the sound to work in three directions rather than just one. We also need to find completely new hanging points for the projector lights, which is another challenge for us.

“But the most important thing in our job is to bring the innovative Pioneers spirit into the event. It’s very special for us and probably the biggest highlight during my time working on it was to win that beaworld Award last year. I presented it to the jury of experts and it was very satisfying that they recognized us.”

Another aspect of the Media Apparat remit is filming and camerawork, the multimedia show concepts and stage direction. Their Stage Director works closely with the Master of Ceremonies Chris Wells, who once again flies all the way from Tokyo to take charge of proceedings this year.

“To be MC is a trip!” he tells us. “The whole thing is so bizarre. You’re in the Hofburg Imperial Palace, so the setting is incredible. As an event it is wonderful. Wolfgang, the Stage Director, is amazing, and everything is so professional.”

Inevitably, though, things don’t always go to plan. That’s where Chris’s background in improvisation theatre – he teaches improv at the Tokyo Comedy Stores and runs his own show called Improvizilla – dovetails very nicely with the cool instructions Wolfgang frequently whispers in his earpiece.

“Everything is smooth from the audience’s perspective, but what people don’t realize is that while you’re interviewing someone, you can have the director saying ‘we need a few more minutes: the next speaker hasn’t arrived…’

“This is where the improv comes in. It’s fine…I just vamp! If I’m talking to someone I ask more questions. And if I need to extend even more, I do have little bullet points of things to discuss, which I can pull out any time we need padding.” 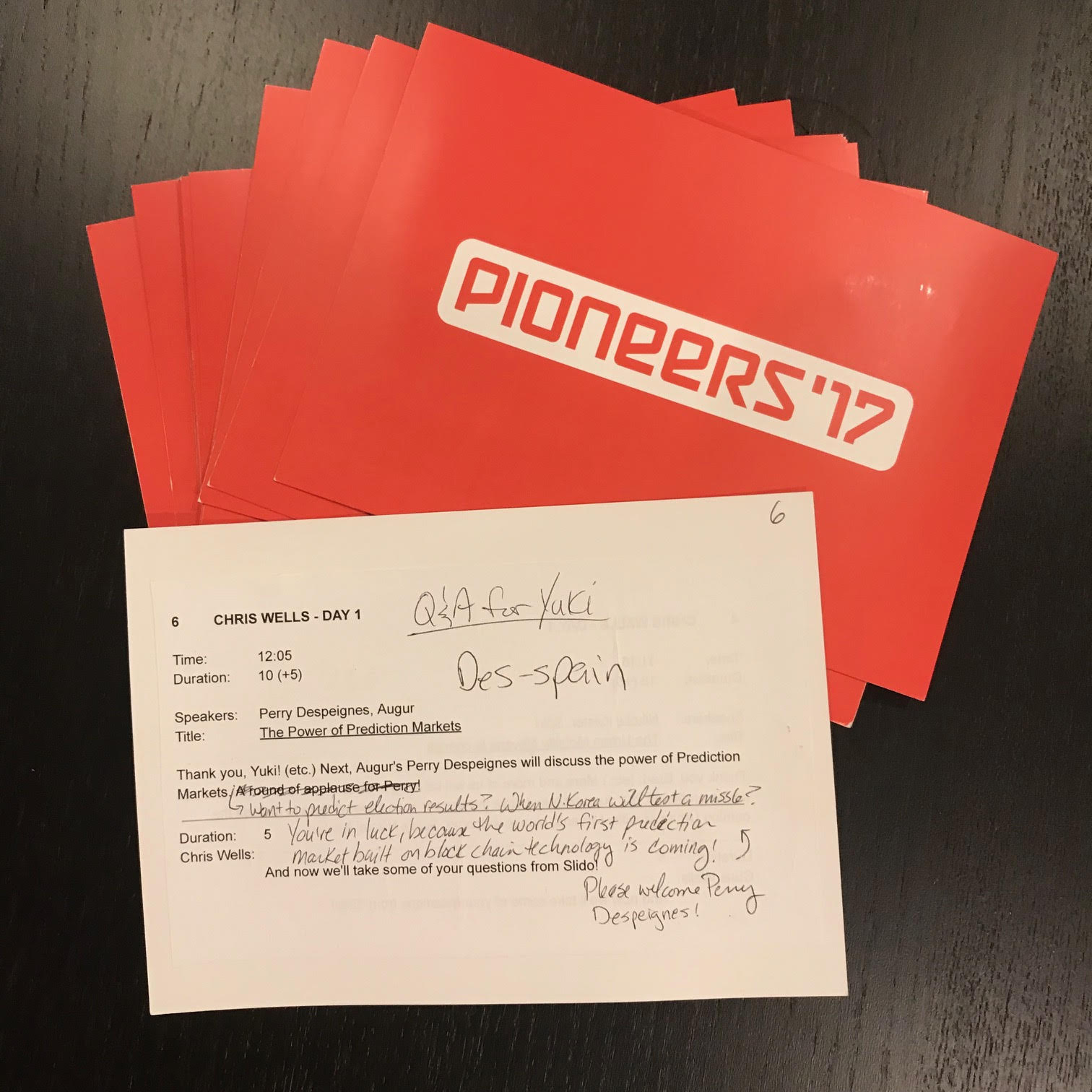 Wells, who first got to know us at our Pioneers Asia event in Japan in 2016, will be making his third trip to Vienna. A year ahead of making his MC debut last year, he helped startups during the Mentors Day we traditionally run for our Pioneers Challenge Top 50 selection on the day before the event. Since this clashes with the pre-event sound checks on the Arena Stage, he hasn’t been able to do so since taking the MC job. But it did give him a glimpse into the amazing personalities founders tend to be, as well as the chance to impart some knowledge on the dark arts of pitching.

“Mentoring the startup people is so much fun! They’re so full of energy and they’ve got such great ideas. They’re special, they make you think ‘what did I do on my Saturday again?’

“At the Mentors Day I ran a workshop called ‘improvising your way out of mistakes.’ It uses improv techniques to practice your pitch and learn how to cope with mistakes when your brain throws the wrong word at you. So that you don’t stumble and have to go back to the last paragraph. Sometimes people memorize their speeches too well – you need to have some fluidity.”

Any founder will tell you just how draining it can be to prepare and deliver a three-minute pitch, so spare a thought for Wells, who’ll be in the spotlight for two long and exhausting days at Pioneers’18.

“Altogether it’s something like a 16-hour day for me. And then you’ve got side events in the evening! But I always make sure that I cut out and get home to get sleep. That is the most important thing, because Pioneers is like a marathon for your brain and you have to be on top of your game.

“And if something does go wrong up there, you acknowledge it – and it’s funny! That’s life…I’m not going to commit hara kiri on stage because something got messed up!”

Anyway, Chris will not have to work alone this year. He might be the only human MC, but he’s going to have a few tech-driven helpers. And while we’re going to keep the details a secret, you might want to take note that Pepper, one of the world’s most famous robots, has been granted a ticket to return to our flagship event.

A talking, anthropomorphic robot in the most classic sense, Pepper is brought to life by Humanizing Technologies, an innovative and dynamic company specializing in Pepper and telepresence solutions. With their passion for software development, their goal is to bring humans and technology closer together.

Finally, with impact a key consideration in so much of the content we’ve lined up for the event, it’s fitting (no pun intended) that everyone on the Pioneers crew will be sporting Fairtrade T-Shirts throughout the event days. The same goes for our appearances at our other events throughout the year. It’s a small thing for us, but as anyone in the startup world can tell you, every success starts out small!

There’s still time to grab tickets for Pioneers’18. Snatch one of the last available spots here!