By Sophie RabApril 3, 2019No Comments 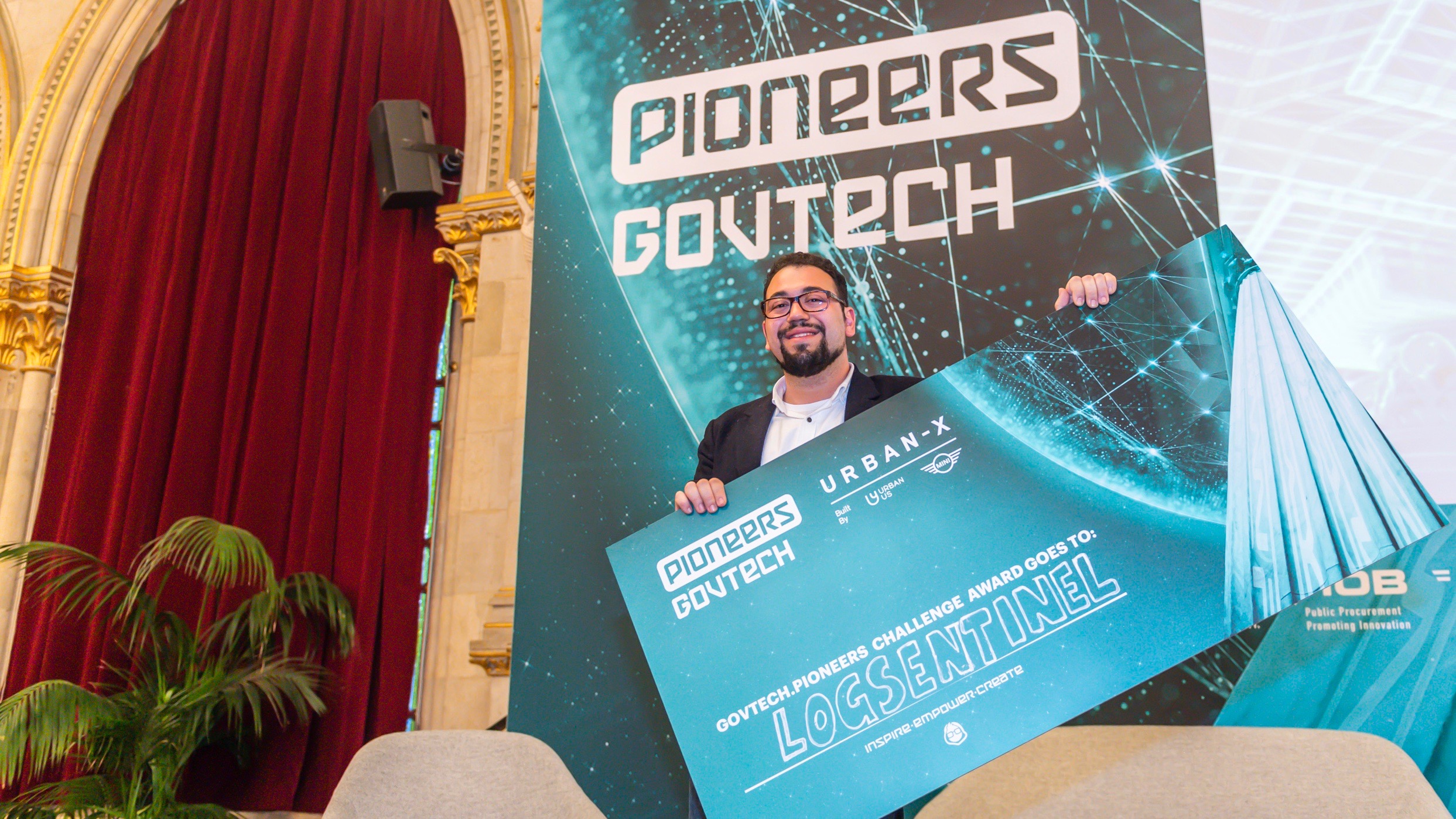 Cybersecurity startup LogSentinel is the latest winner of GovTech.Pioneers. Victory at Vienna City Hall today (April 2nd) means not only a pitching slot at our flagship event in Vienna next month, but also a prize trip to New York to meet with the URBAN-X accelerator.

The Bulgarian-Dutch startup beat off three fellow finalists in a new-look final round format at our latest industry-focused event. They offer a solution for governments to secure sensitive information in a private blockchain. This ensures that data is protected and cannot be tampered with – a worldwide danger for authorities from city to multi-national level.

Or, as Chief Operations Officer Anton Gerunov put it in his final round summary, “We are the guardians of truth on the Blockchain!”

“It’s not just fancy technology, but it solves a problem that governments care about,” said jury member and Urban Us* Partner Stonly Baptiste at the winner announcement. “Cybercrime is a big and growing problem for governments, and it’s timely to present a new solution in this area.”

LogSentinel qualified for the final after victory in the Cybersecurity pitching track. Their fellow finalists were CivilCops (Citizen Collaboration track), SimLab (EdTech track) and Avokaado (Open Govtech track). A total of 16 startups from countries including India, Estonia, the United Kingdom and France were hand-chosen to pitch at GovTech.Pioneers. Over 270 applied for the event.

The juries used the Pioneers FlashRate platform to score the startups in both rounds. In the first round, startups faced the same 99-second buzzer we rolled out at Mobility.Pioneers. The all-new final round saw the startups themselves gather around the buzzer, hitting it for the chance to answer a maximum of two jury questions.

But the big stage in the magnificent ballroom (below) wasn’t just for our startups to tell their stories. Top industry speakers from as far afield as Los Angeles, Wellington and Tokyo also shared their insights. 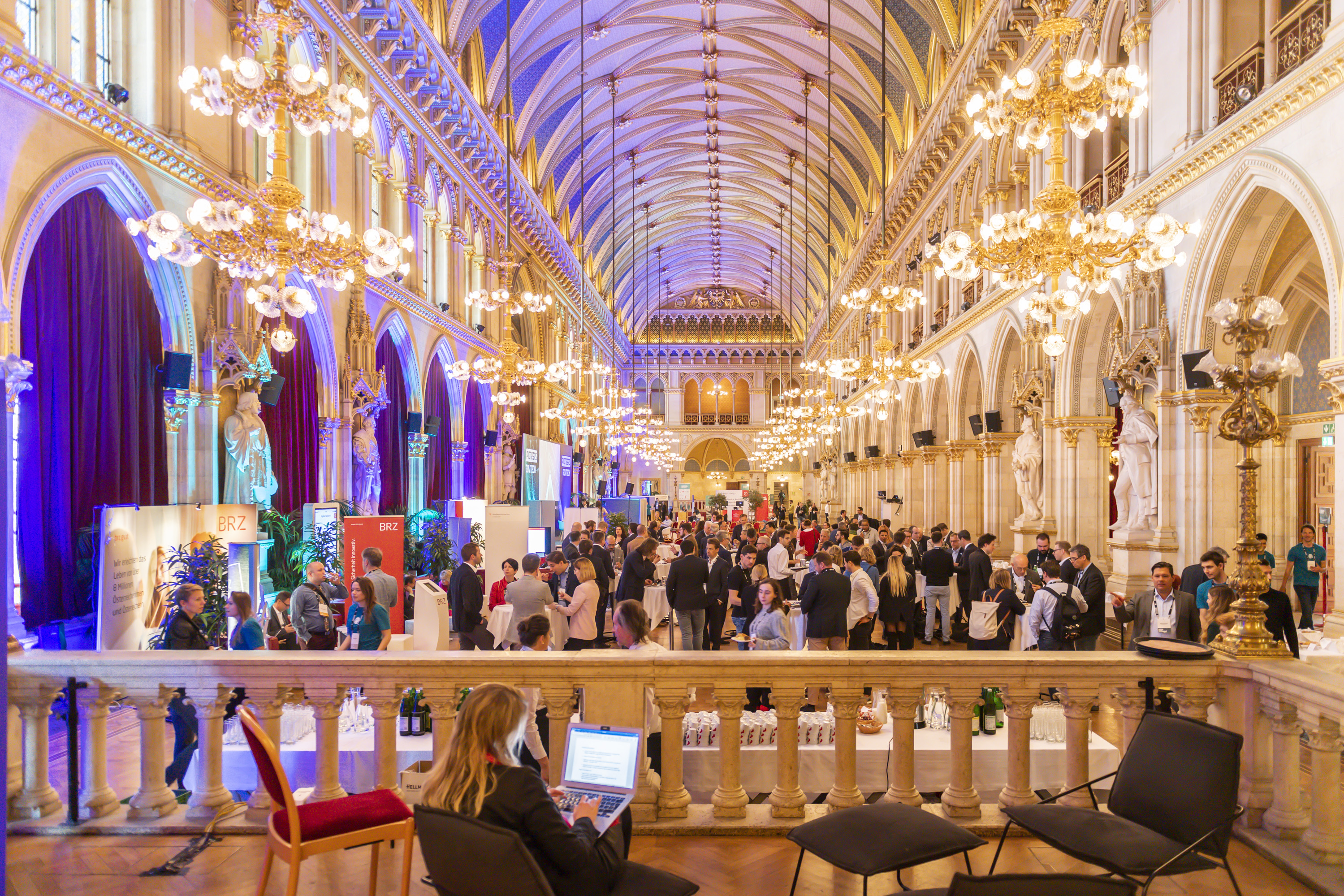 Considering our startup winner, it was fitting that the loudest applause of the day had earlier gone to Neil Walsh, Chief of Cybercrime at UNODC (United Nations Office on Drugs and Crime). He used his recent hospital treatment for bowel cancer as a prime example of how cybercrime really can be a matter of life and death. In his case, a hack on critical machinery (for example MRI and CT scanners) might have had the worst of consequences for him.

This, and the words that followed, gave the audience pause for thought: “If you’re developing tech that might be used for ‘Crime as a Service’, selling it and not caring what happens with it, you need to think about what you are doing. Just because we can do something, doesn’t mean we should.”

But cybersecurity was just one of the items on the list of talk topics. One of the most honest speakers of the day was former Italian Government Commissioner for Digital Transformation Diego Piacentini, who reflected on his two years working on key digitization processes. Although he built a new team from the ground up, he stressed the importance of continuity in this line of work.

“We started from scratch, broke the legacy and built new processes,” he said on stage. “But we still worked on existing projects.

“You don’t want a new government coming in and starting over. It simply doesn’t work in digital transformation. I knew my term was two years and I started working on my succession plan six months before I left. You need continuity.”

Piacentini also mentioned the importance of culture in digital transformation – but he wasn’t the only one to touch on the topic. Nick Gerritsen, our visitor from New Zealand, was another to broach the subject.

“Transformation is about culture, not tech,” said the former Special Advisor to the Department of the Prime Minister and Cabinet. “Technology is the tool, but if you don’t have the culture to pick it up and embrace it, you can spend a billion Dollars and it won’t make a difference.

Collaboration between startups and governments fueled many a conversation throughout the day at the Vienna City Hall. And the City Data Officer for Los Angeles, Sari Ladin-Sienne, had some strong advice for founders looking to make a good impression on people in her kind of position.

“There’s nothing I dislike more than setting time aside and then having a founder just interview me so they can create their best new product,” she said. “The more research you can do going in, the more aware of local news you are, the better. Do hackathons; come informed. Be humble and ask questions of us, sure, but it’s a smart move to avoid asking that big-picture ‘what is your biggest problem’ question.”

And, to conclude, one networking success story! A conversation that began at last year’s GovTech.Pioneers bore fruit at this year’s edition, in the shape of a signed Letter of Intent between GovTech Polska and event partners IÖB (the Austrian PPPI Service Center). With this agreement, the parties commit to taking action to integrate existing solutions into a common innovation package open to entrepreneurs from all over Europe, thus improving the level of public services in both countries and helping the development of the global Govtech market.

Stay tuned to our channels for the GovTech.Pioneers highlights video!

*The URBAN-X accelerator, for startups with solutions to offer cities, is a project of Urban Us and MINI/BMW.

The next Pioneers event will be our flagship in Vienna. Pioneers ’19 goes ahead on May 9th-10th. Get tickets to join the palatial extravaganza here – or check out last year’s video highlights here.