By Sophie RabOctober 12, 2017No Comments 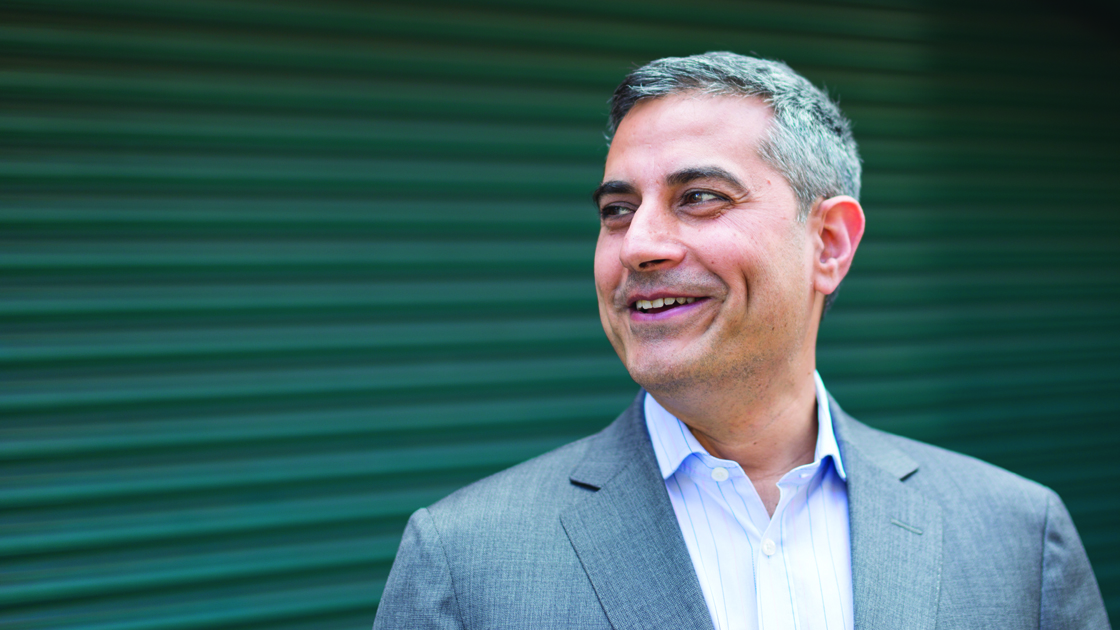 “If we invented the healthcare system fresh today, would it look the way it does now?”

That’s a question Vishal is passionate about answering – and one of the key themes he’ll be tackling during his talk in Amsterdam. He believes healthcare needs radical change to reach its full potential. What’s holding it back isn’t technology. Rather, it’s systems and delivery that haven’t kept pace with the vastly improved tools available. These being big data and new patient empowerment possibilities.

“There’s a negative power of legacy there that prevents us from doing the best we can,” he told us in an exclusive interview yesterday. “The biggest risk is that we end up making digital copies of the bricks and mortar system we have. Are we in healthcare just going to make an online Wal-Mart, instead of an Amazon? Because those are very different things.”

The first example of technology that necessitates a total rethink of the healthcare landscape is the arrival of massive data sets.

“One of the fundamental changes now is that the number of data points you have in front of you before you make decisions for people is so big. In the past, you didn’t know much about the person so you treated them based only on major parameters. But now you can have say 3 billion DNA nucleotides, and you can make the system more precise. So you end up giving people more appropriate treatment.

“And yet we’re not doing that. And it’s because the system we’ve built is unable to deal with it. We have a great product, but because of the size of the shelf in our store, we can’t sell it. Our store has a stupid design, so we can’t get people to buy.

“Another thing we don’t do is try to understand the many unplanned admissions in hospitals. People are coming to hospitals that shouldn’t be doing so, and nobody seems to want to find out why that is happening.

“A further example of unused data potential is that we don’t sequence the DNA of every child born. It’s a one-time cost, and you can maximise its value in terms of interventions by doing it even before they are born.”

A change of mindset is also needed when it comes to facilitating the wider use of those new patient empowerment technologies, says Vishal.

“Some patients want to try it and some don’t. But if the trade-offs are made more clear, if the tools are provided, then people would make the change. We just don’t treat patients with as much responsibility as they should.

“Right now if you have high blood pressure you have two options. One is to go to your doctor every two months. They check your blood pressure and they change your dose. The other option is you give the patient a blood pressure machine, educate them on the process, and then they’re able to test their own blood pressure. And every study that’s been done suggests that if you give patients more control, their outcomes are better. Better than actually going to the doctor.”

The challenge for the industry, then – especially those health startups and corporates who’ll listening to Vishal’s talk with interest – is to innovate with ground-up thinking.

“Having this discussion should give entrepreneurs ideas about what they want to build,” notes on of Europe’s top healthtech investors. “We need to change the mindset out of the legacy system. All the things we can possibly do are actually in front of us – but how should we do it?”

“If you landed from Mars today, and somebody gave you a challenge to keep people healthy, would the first thing you do be building a hospital? Probably not. You’d go to food stores and ask why people are eating what they’re eating. Then you might go to schools, and ask what kids are being taught about health.

“The startups that would excite me the most are the ones trying to solve a very big problem with the patient more in control.”

The task facing everyone innovating in this space is a major one, and which Vishal believes is best approached by risk-taking. Big-thinking startups should be encouraged to try, and, if necessary, fail.

“A lot of startups begin trying to solve the problems of the existing system, but then they get pushed into the low-value end of it because healthcare professionals say, ‘This is never going to happen, why don’t you try and do something else?’ That’s like taking the Amazons of the future and sending them to make an online Wal-Mart. We should stop doing that and take risks.”

We’re giving 15 of the 100 selected startups in Amsterdam the chance to pitch at the event. They’ll be pitching in three different sessions: Transformative Medical Technologies; Preventive Medicine & Digital Patient Pathways; and Personalized Medicine & Health Management. The startups who’ll take to the stage and compete for a pair of tickets to Pioneers’18 are as follows.

Join us in Amsterdam here.