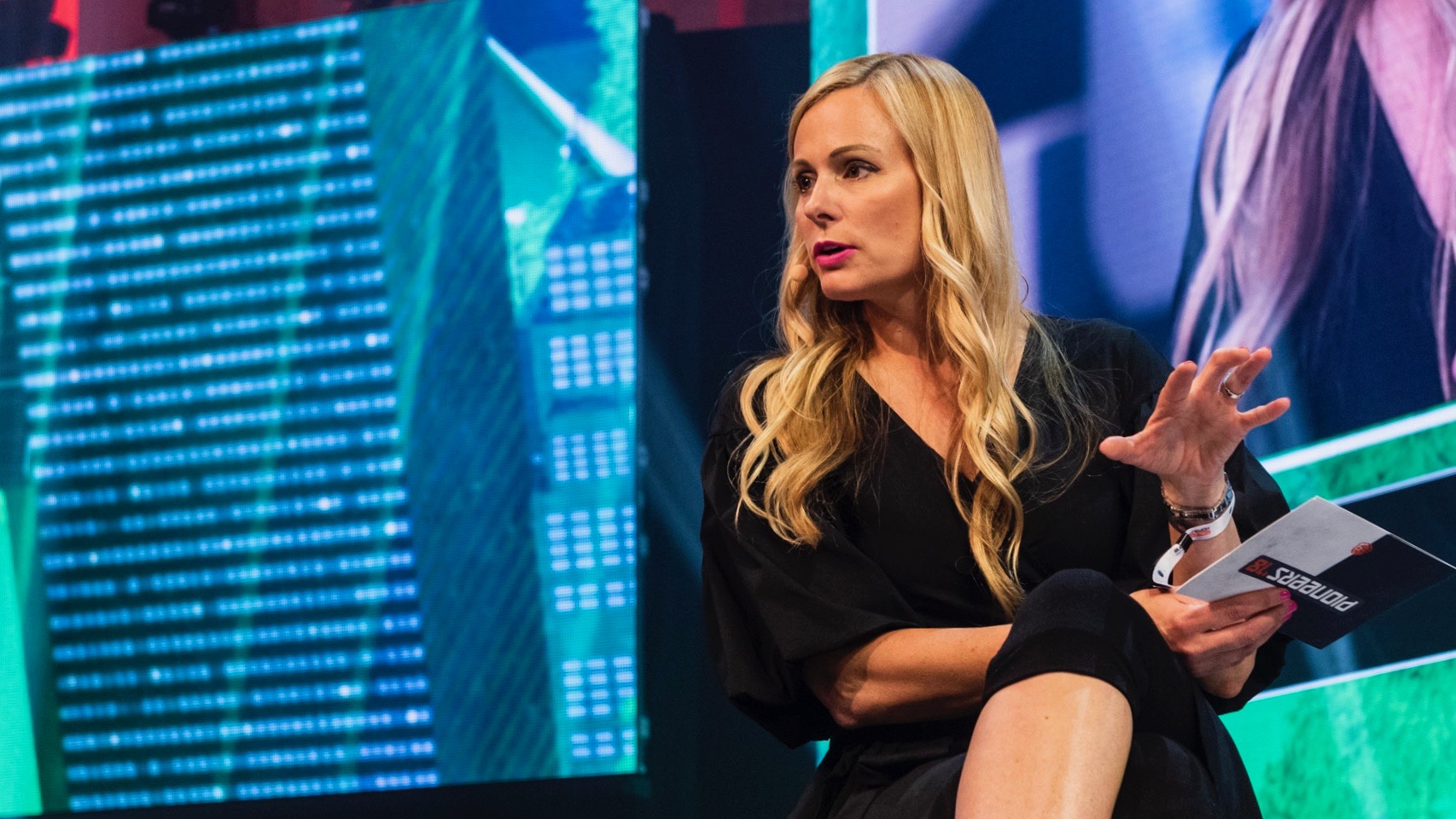 In keeping with the ‘technological walk through human life’ storyline driving Pioneers ’19, it seems only right that the Arena Stage action will be hosted by two humans. That might seem an obvious course of action anyway, but if you think that then clearly you weren’t with us last year! Those who were at Pioneers ’18 would doubtless recall that Master of Ceremonies Chris Wells had a robot sidekick in the form of Pepper.

This year it’s time for something new, so Pepper’s gracefully rolling aside and making way for global social entrepreneur Nikki Eberhardt. No stranger to the Arena Stage after moderating a panel discussion on Impact Through Technology last year, she’ll team up with Wells to keep the show running smoothly. And, as she recounts, it wasn’t a difficult decision for her to accept the challenge.

“Last year my mind was blown by innovators, high-powered speakers and awesome moderators in the room,” she told us. “The backdrop was also amazing. When Pioneers asked me to return as co-host for 2019, I immediately said, ‘yes’!”

In Wells (below, with Pepper) she’ll have a partner who can share two years of experience as MC at our flagship event. As ever, the man whose voice is used for English announcements on Japan’s bullet train will be flying in from Tokyo to do his bit in Vienna. 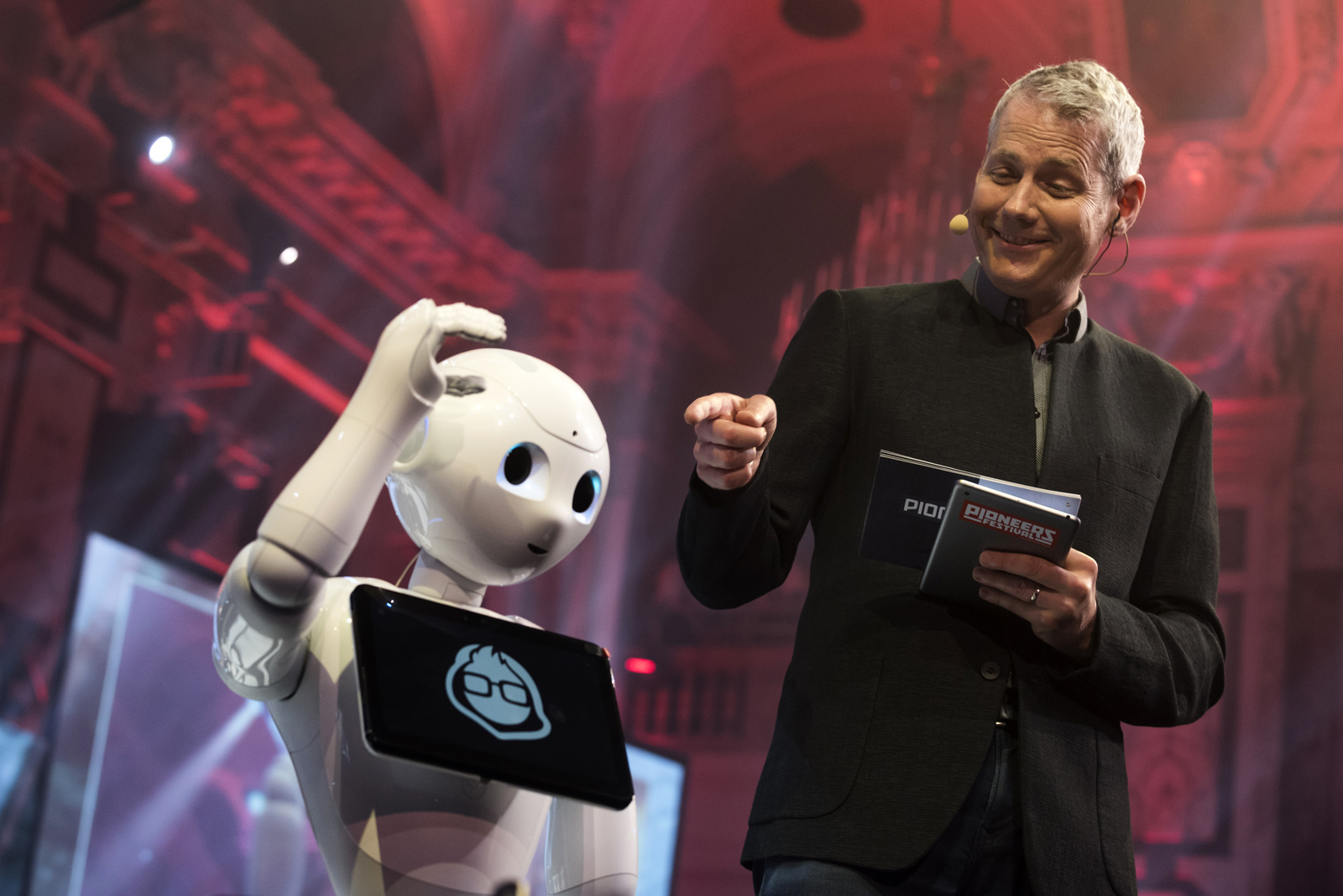 “It’s the creative people and the interesting pitches that keep me coming back,” says Wells. “Not to mention the amazing setting at the Hofburg Imperial Palace!”

Eberhardt says her approach to her bigger role this year will be driven by the audience in the massive ballroom that’s the setting for the Arena Stage.

“I want to understand my audience so I can resonate with them,” she says. “As co-host, I try to imagine what will educate, connect and inspire so that I can enable Pioneers ’19 to deliver an amazing experience for attendees. Ultimately, I want them to get a large dose of inspiration in order to drive the next innovation that may change the world!”

We asked both Chris and Nikki – one a professional stage performance man and one a globally-connected entrepreneur what advice they’d give to the startups who’ll pitch at the Hofburg.

“My biggest advice would be to slow down and not rush through your presentation,” says Wells. “I’d rather see someone present a bit less information and have the time to deliver a well-paced pitch than see someone have to rush through due to lack of editing. And smile!”

“Bring your ‘A-game’ through passion, storytelling, tight differentiation,” adds Eberhardt. “Make us feel like we can’t imagine life without your innovative product or service and convince us that no other biz has the market edge you do.”

We’ll soon reveal the names of the fifty startups we’re selecting to pitch at Pioneers ’19. In the meantime, we’re happy to announce those of several more of the speakers whom Wells and Eberhardt will be calling up onto the Arena Stage during the two days.

Meanwhile there’s also more speaker news for the 500+ attending seed and Series A startups, for whom the Academy Stage will be a focal point throughout the two days. One of those sharing their expertise there will be Geraldine LeMeur, Co-Founder of The Refiners, a San Francisco-based pre-seed fund, who’ll provide advice particularly valuable for female founders.

Also sharing wisdom will be Chelsea Rustrum, author of It’s A Shareable Life, who’ll talk about shared ownership and value distribution through the lens of the sharing economy and blockchain technology. And Cameron Sinclair, Co-Host of global media series Human.kind, will share his insights on building positive change in communities and human-centric solutions that address global issues.

Want to book your place in the audience at the Hofburg? Grab one of the remaining tickets to join us in Vienna on May 9th-10th here.

Partners for Pioneers ’19 include Google, Mercedes and PwC Austria.