Electric Vehicles – an analysis of emissions 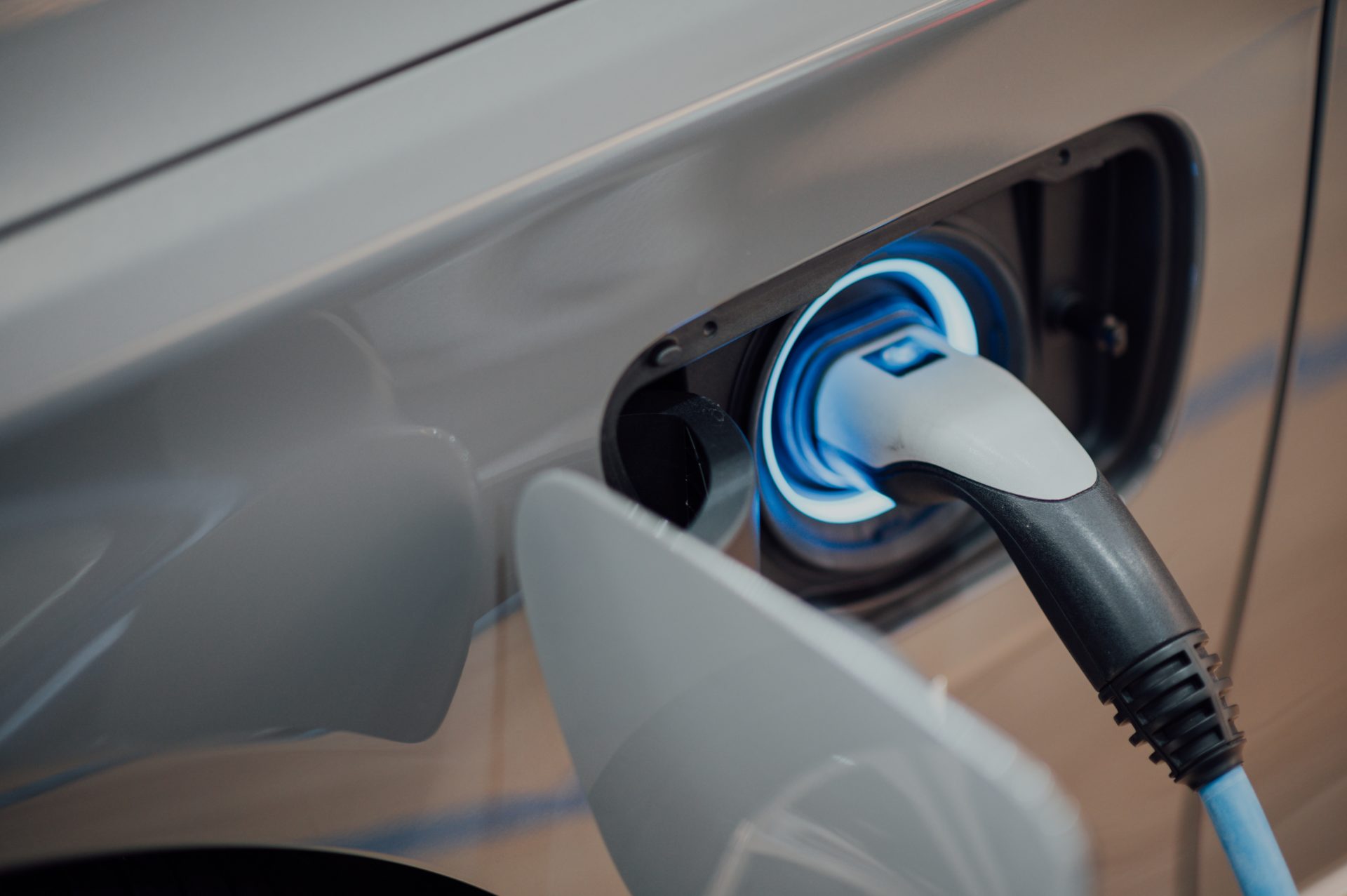 A Power play: Since transportation is a large energy consumer and burns most of the world’s oil, the environmental impact derived from this industry is exceptionally significant. The transport sector accounts for about 16% of the planet’s greenhouse gas emissions, most of which comes from road transport. To lower this number, manufacturers are filling cities around the world with electric vehicles and releasing new battery-powered alternatives to compete with traditional gasoline and diesel-driven vehicles. But how likely is this electric revolution to completely replace traditional cars? What are their strengths and weaknesses, and most importantly, how good are they to the environment? 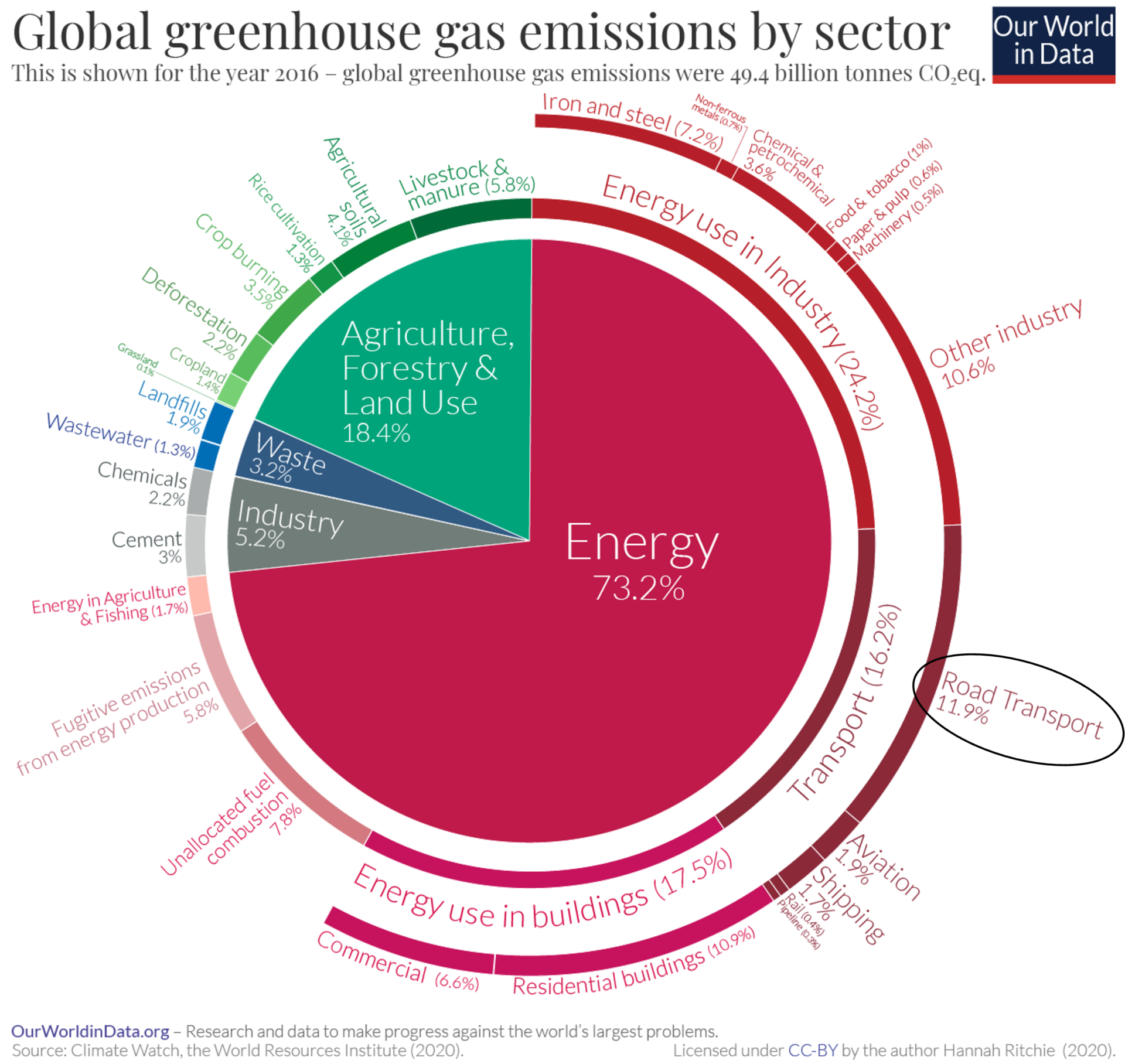 EV as greenwashing?: The EU has decided to aggressively cut down on emissions from combustion engines, deciding on a target of 55% reduction by 2030 (from 130g in 2019 to ca 59 grams per km in 2030). In order to reduce, manufacturers and legislation must work together and define a clear pathway. With electric cars on the market the solution seems to be obvious as EVs are said to have significantly lower emissions and are therefore essential to meeting this extremely ambitious goal. Their environmental footprint, however, has frequently been criticised because “they are more energy-intensive in their production” or “the electricity they use is not clean.”

Therefore, before we draw our conclusions on electric vehicles, let’s look at what causes emissions in both battery-electric (BEV) and gasoline or diesel (ICE) vehicles. In this article, we dive deeper into two important and most frequently discussed topics: the calculation of emissions produced during EV manufacturing and their charging.

Made in …: The technology in the lithium-ion batteries that drive electric cars is the secret to their performance. Unfortunately, the use of these batteries creates an impact on the environment as they contain rare elements, whose extraction and production can require a lot of water and electricity. Numerous studies have been conducted on this matter and it seems that the place of producing the battery plays a major role in its lifecycle emissions. Data from 17 different studies are displayed in the figure below. The chart displays emissions based on the region in which the batteries were produced:

Literature review of lifecycle greenhouse gas emissions from lithium ion battery manufacture, in kg CO2-equivalent per kWh of battery capacity. Studies are coloured based on the region in which batteries were manufactured. Error bars are shown when provided. The original IVL study is included as the “Romare & Dahllof 2017” bar, while the revised IVL study is included as “Emilsson & Dahllof 2019”. Chart by Carbon Brief using Highcharts.

The majority of studies that have been published recently indicate lifecycle emissions with an average of about 100kg CO2 per kWh. Estimates of emissions are generally greater in Asia than in Europe or the US due to the region’s extensive usage of coal for energy generation. Studies that directly compared batteries produced in Asia to those produced in the US or Europe showed that lifecycle emissions outside of Asia were about 20% lower.

In short: Yes, emissions are high from the production of the battery, and there are environmental effects beyond emissions, but location of production and provenance of materials matter. Further recycling improvements in batteries may even boost the efficiency of the production of batteries.

Dirty, dirty electricity: The majority of emissions from both electric and conventional vehicles over their lifetime in most nations come from vehicle operation, specifically the tailpipe and fuel cycle, rather than from the manufacturing process. This is another argument against electric vehicles, namely that they charge on ‘dirty’, fossil-fuelled power grid. So despite not polluting via tailpipe fumes, they still cause emissions at the power plant. Even clean grids will rely on fossil fuels during ‘dark doldrums’ when renewables are intermittent.
Nevertheless, an overall growing number of studies indicate that the average BEV has a smaller carbon footprint over the lifetime of the vehicle in most countries. While the amount of carbon released when a gallon of gasoline or diesel is burned cannot be decreased, this is not the case with electricity. In nations like France, which generates the majority of its electricity from nuclear power, or Norway, the lifecycle emissions for electric vehicles are significantly lower (from renewables).

Lifecycle greenhouse gas emissions for conventional and electric vehicles (by country) in grammes CO2-equivalent per kilometre, assuming 150,000 kilometres driven over the vehicle lifetime. Adapted from Figure 1 in Hall and Lutsey 2018. The error bars show a range of values for emissions from battery manufacture.
Chart by Carbon Brief using Highcharts.

The chart above bases electric-vehicle emissions on the current grid mix in each country. However, if the climate targets set in the Paris Agreement are to be met, electricity generation will become significantly less carbon-intensive, further increasing the advantage of electric vehicles over conventional ones. 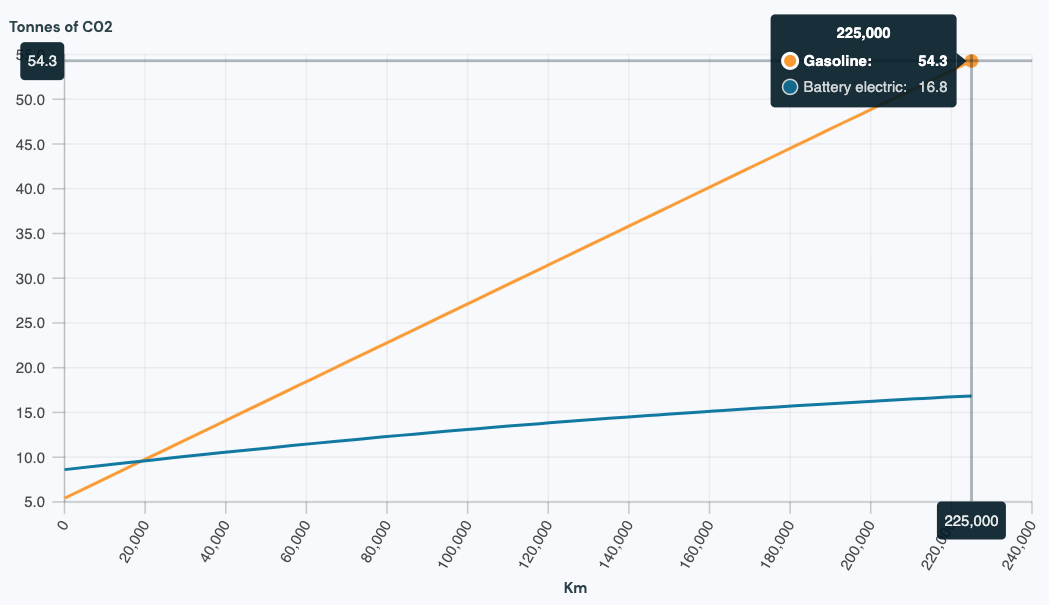 Adopted from European Federation for Transport and Environment AISBL

Magical number 69: Looking at a comparison between battery electric vehicles and a medium sized gasoline vehicle the numbers show that emissions over the cars’ lifetime (225,000 km) is 69% lower. Battery production gives a headstart to EVs in emissions but as the cars pass the 18.500 KM mark, gasoline-driven vehicles continue to emit CO2 in a sharp linear way into the atmosphere whereas EV emissions stay pretty flat (assuming that emissions related to electricity production continues to reduce per kwH as economies transition to net-zero)

To sum up: it’s clear that electric vehicles are not completely emission free and should not be labelled as such. However, currently they are a big improvement over combustion engines in terms of carbon emissions as well as their energy conversion efficiency (roughly 60-70% of the energy of combustion engines is lost as heat, whereas in electric vehicles up to 97% of electric energy is used for movement). Combustion engines may still get more efficient, and synthetic fuels may one day be an interesting alternative –  but nothing beats a bicycle (for short distances) or a train (for long distances)!

For further reading to learn more about electric vehicles and their emissions visit the following reads:

A. Hoekstra (2019): The Underestimated Potential of Battery Electric Vehicles to Reduce Emissions

Do you want to know more about Pioneers.Climate services?

Get in touch with our Head of Pioneers.Climate Philip Reuchlin to book a short intro call and talk about how Pioneers could help you combine your sustainability and innovation initiatives. 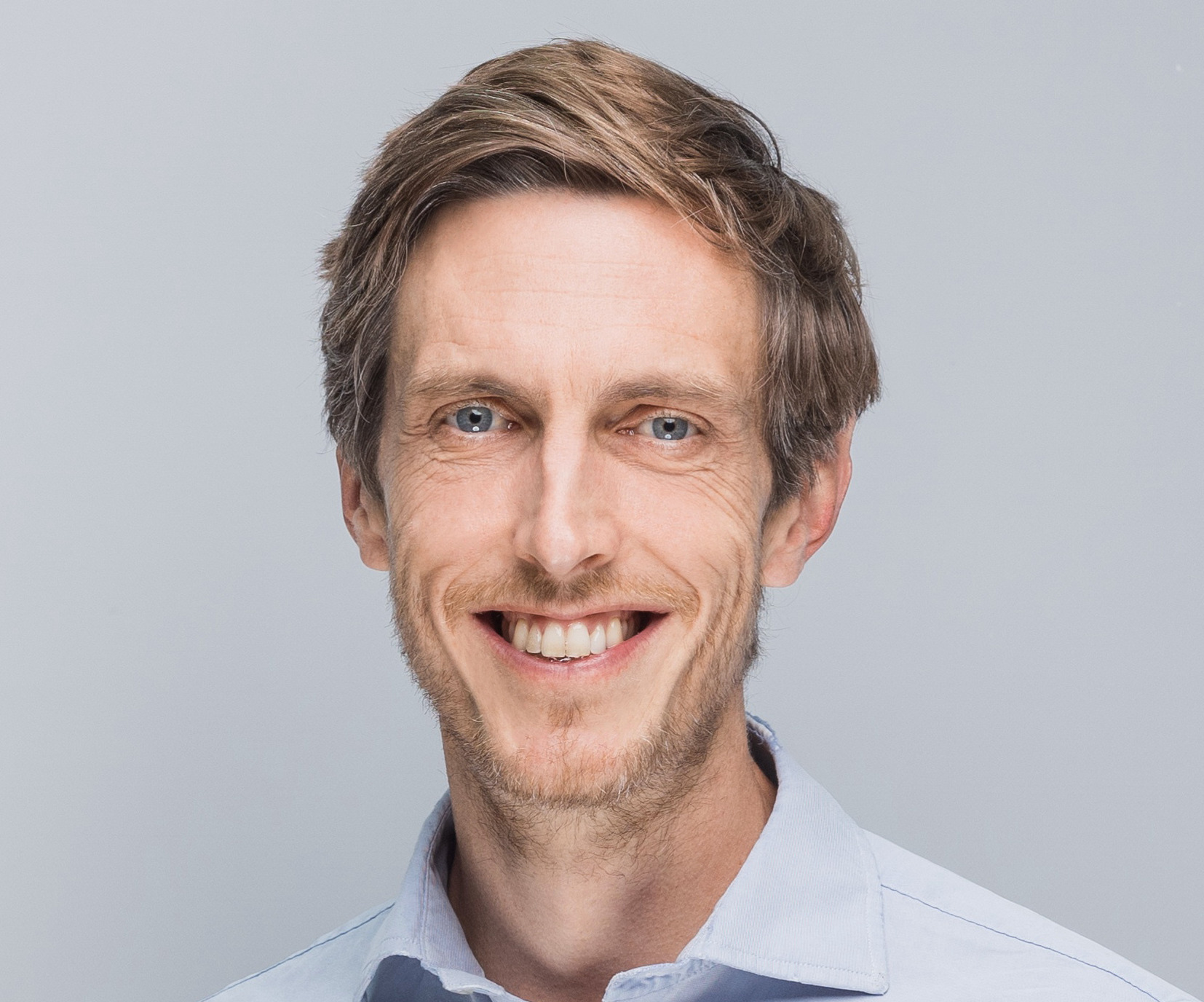