Pioneers Success Story: Craftworks and the Art of Rapid Prototyping

By Sophie RabNovember 13, 2017No Comments 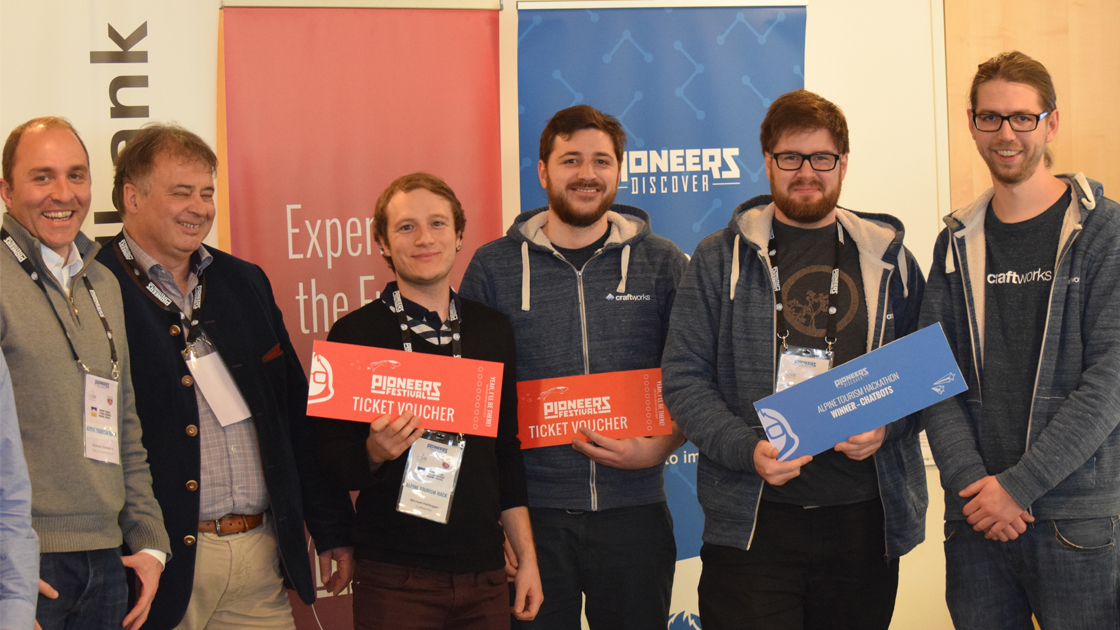 Talking to startup founders on a daily basis, one gets used to hearing about how their product is the way, the truth and the light – give or take the occasional pivot. Talking to craftworks is a somewhat different experience. Because three years into the startup’s story, they don’t have a definitive product at all.

But that’s absolutely fine. It’s policy, actually. And what craftworks does already have is a string of promising, profitable projects going on with major corporate partners. And most of those came from taking part in hackathons organised by our consultancy arm, in which the Vienna quartet have time and again been recognised for rapid prototyping in the strictest sense of the word.

Having joined the ÖBB (Austrian Railways) Open Innovation Challenge Workshop in December 2016, craftworks’ took part in their first hackathon at the ANDRITZ Hackathon in January. They came away from that with third place for the pulp mill machine learning model they developed, and then followed this up with victory in the Alpine Tourism Hack, thanks to the chatbot they created. In June they took part in the Porsche Holding Hackathon in Salzburg, and then, just last week, emerged victorious in Linz after building our partner KEBA a mobile app for machine diagnostics and problem-solving.

More importantly than winning prizes, though, is the connections and business leads craftworks have made after proving themselves in the pressured environment of these events. It’s no coincidence whatsoever that they now count ANDRITZ, Porsche and ÖBB among their biggest corporate clients. And following the Industry 4.0 Hackathon, there’s every chance KEBA could join that list in the near future.

But while hackathons invariably give worthy startups a stage, they still have to perform. And one reason craftworks do this so well, reckons Partnership Manager and Co-Founder Michael Hettegger, is that the rapid prototyping a hackathon requires is really the company’s ‘consultancy’ business model in microcosm.

“The consultancy approach is rare,” he admits. “And any investor would say that we should shut it down because it distracts us from building a product. I do agree with that…at some point! We eventually want to focus 80-100% on a product and pushing it to market, but at the moment we’re building up a team that will be capable of working on such a product full time.”

Speaking of investors, craftworks don’t actually have any. And we mean that as a complement: the four co-founders have used their own money and brainpower to build up an operation that’s winning business as well as hackathons. Consultancy is working well right now, but when they really find a winning idea, they’ll move swiftly.

“We want to use the money we’re making now to finance building products. We don’t want to use investor money to build a product that might solve a problem, or might get used. By consulting, we will already know what the problems are. That’s the idea.”

And how will they know when they’ve found that one use case really worth going after?

“We have some KPIs, but the basic idea is that if one product makes up 20% of revenue then we only do that one.”

“This approach is about finding something with market fit. Maybe we’ll go slower but it’s more efficient.”

And on the subject of efficiency, this is where the four graduate software developers (and now self-made machine learning experts) consistently wow the corporates. 48 hours isn’t a long time to come up with an all-new solution to a corporate challenge, after all. And the fact that craftworks doesn’t have a fixation on an existing product probably helps them do that.

“We can build something from scratch, really trying to understand the problem and find the best solution. In Linz we built a mobile app, and while it might not be fancy innovative like Blockchain or something like that, it solves the problem 100%. And I think that’s what really matters to the companies sponsoring a hackathon.

“We’ve only done Pioneers hackathons, come to think of it. We like that they are really competitive with a really high quality of startups compared to ‘weekend hackathons’. Everybody is really engaged and we want that. Like Pioneers Discover is always saying to us, it’s not about beer and pizza, it’s about solving an issue and providing a good solution.

“At the ANDRITZ hackathon we were so impressed by the other pitches, we thought ‘wow, what are we doing here?’ But we did our best all the same, and ended up getting third place. That gave us a huge push….and we sealed a contract with ANDRITZ just a couple of weeks ago!”

craftworks’ success thus far, and especially the way they’ve gotten it, gives SaaS or digitalization founders in particular something new to think about when considering how they build their startup’s business model. Whichever way you choose to go, though, one thing’s abundantly clear: taking part in hackathons is good for business!