BroomX: Making The Most Of Virtual Reality 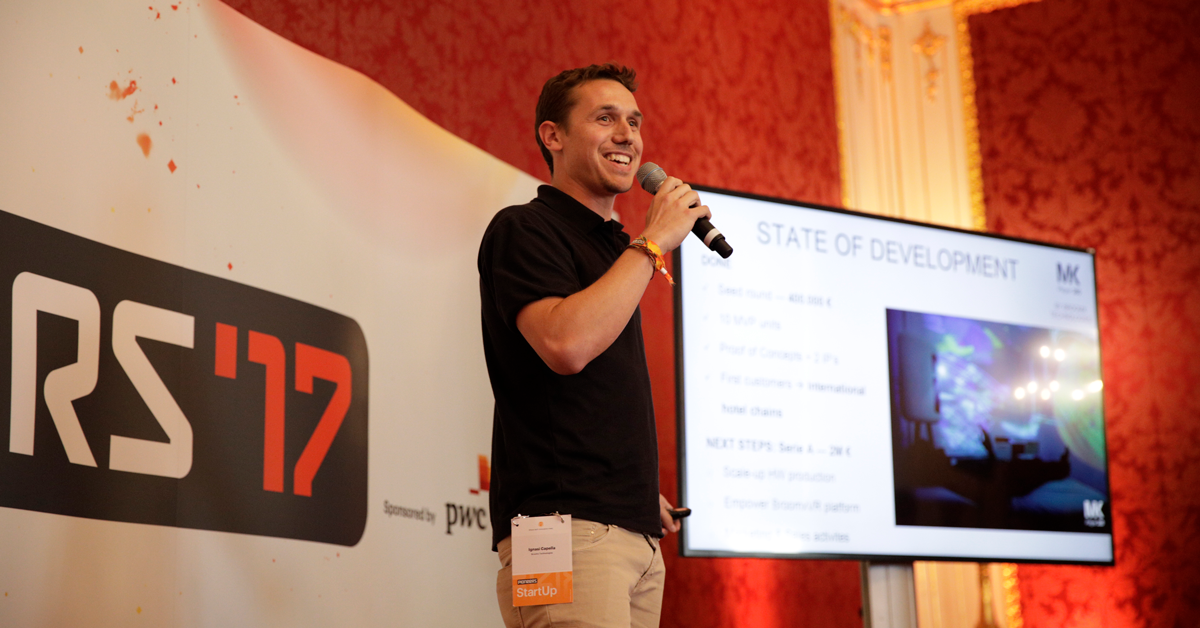 A video call with Ignasi Capellà makes other video calls look positively 20th-century. While the rest of the world makes do with spectacularly synthetic, soullessly whitewashed office backdrops – a palm frond or two is about all you can usually hope for – the BroomX CCO has a series of dynamic visual extravaganzas playing out behind him when we meet on Skype.

And if your company’s business happens to be next-generation virtual reality projections, then why not? There’s no better way of bringing your product into the very heart of the conversation. The feeling that you’re orbiting earth (or, in another part of the show, that you ought to call the fire brigade immediately) certainly beats screen-sharing some tortuous PowerPoint creation.

Virtual reality without goggles? Which can clearly be seen across Skype? Yep, that pretty much sums up the BroomX USP. The Barcelona-based startup does 360-degree VR projections you can enjoy while lying in bed – without the need for a ridiculous-looking headset. And while it’s hard to fully appreciate over video, it’s fair to say that it was something truly fresh: the only familiar part of the experience was that Skype’s audio kept cutting out.

With technology that might hopefully be a first step towards consigning VR glasses to the virtual rubbish dump, plus Ignasi’s endearing stage presence, it’s no wonder that BroomX was chosen as one of the Pioneers Challenge finalists at Pioneers’17 earlier this month. They might not have walked away with the top prize this time, but they were nailing down some exciting deals (this 360 VR in your hotel suite…) even while the pitching played out at the Hofburg.

“This is our baby, one of our very first projectors,” says Ignasi, nodding towards the MK Player360 currently livening up our call no end. Only about 10 of these exist right now. And these elegantly simple (on the outside, anyway) €15 000 machines are the result of four years of hard work from a group of VR aficionados who impishly describe themselves as ‘serious geeks’.

Geeks they may be, but one gets the feeling that the BroomX guys are fairly in touch with the real world. “Now you can enjoy the full experience of London on New Year’s Eve while drinking a beer on the sofa with your friends at home,” beams Ignasi. “We can take any content built for headsets and display it in this new social and natural way.”

The projections cover your entire field of vision inside a room – ideally with minimal furnishing and outside light blocked by curtains at least – which BroomX says offers the same experience as wearing a headset. But while this kind of thing is an appealing extra for hotels to offer in the VIP suite, it’s not all about watching fireworks in Westminster, riding waves in Tahiti or wandering through virtual Dalí paintings.

“VR is being used in many ways in health care,” says Ignasi. “One of those is to treat phobias, like flying or public speaking. But people sometimes don’t feel comfortable with goggles. Or they can’t wear them for long. We can display the same content in a calm and user-friendly way for a much longer time – even for hours!"

Training surgeons and boosting patient morale are other areas the BroomX vision for VR might well help, he adds. “Wearing no goggles means you can simulate a 12-hour surgery if you want. And imagine if you were hospitalised a long time: we could provide a projection that makes you feel like you are at home. You could leave the hospital atmosphere and go anywhere in the world.

“Education and real estate are other sectors already using VR a lot. Now we have a tool to help these industries to make the most of VR. Today’s headsets are cool in a way, but we’re really going a step forward with MK Player360.”

And will BroomX be making the content itself? Ah, not so much! In what might turn out to be a pretty smart strategic move, the startup is taking a leaf out of the Apple book: a familiar marriage of hardware with curated content. The latter to be made available through its BroomXVR platform.

“Apple is a big reference for us, of course. We’ve studied the UX of Apple, Spotify and other successful companies working between hardware and software. I would say what we have is a mix between iTunes and Spotify.

“Content creators are the kings, and we’re reaching out to the best in the world. We will curate the best VR content, store it in the cloud and it will stream directly to the MK360. It is a win-win model in which our monthly subscription is shared with the content creators, based on the number of views.”

As for the MK360 itself, expect a serious price drop as production scales up: their baby will number in the hundreds soon enough! While the Barcelona Tech City member startup is tight-lipped on details about its first big customers, all we can say for sure is that future projections look good…