By Richard AsherOctober 23, 2017No Comments 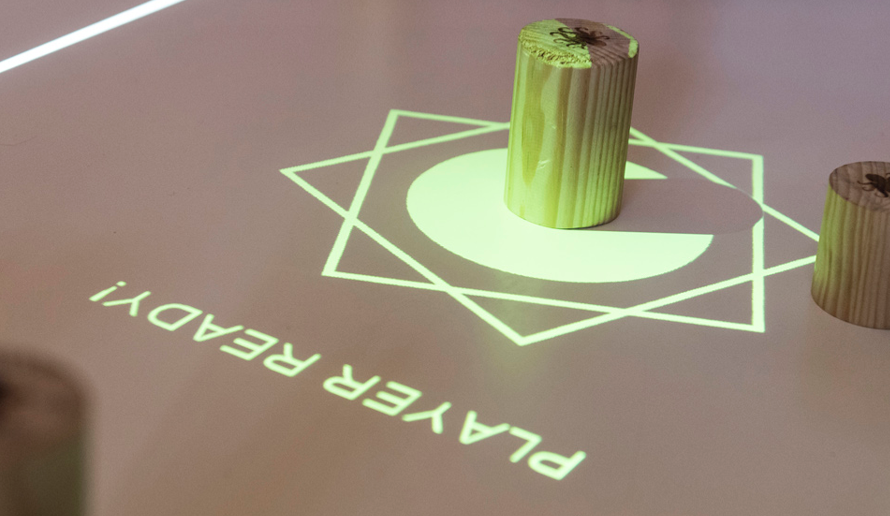 Just when you think you’ve got all those Startup World stereotypes nailed, along comes something that makes you think again. Like a founder with over 20 years of experience in an industry leadership position, and whose company does a lot of work for nothing. Mark Rolston, Chief Creative at Argodesign, is one such example.

Formerly Chief Creative Officer at Frogdesign, Rolston is one of four founders working at a company that likes to get creative and play around with big concepts for future tech. The air hockey demo that featured at the Hofburg was just one graphic illustration of the technologies Argodesign has been experimenting with over the last four years – in this case the potential for projection to take computing ‘off-screen’ and into the real world.

And when they work on something like that, it’s not like there’s always a particular customer in mind already. This is a company that makes time to dream.

“Although it eats into our margins, we spend 20% of our time looking at new tech and new models for interaction,” says Mark as he explains the essence of Argodesign’s philosophy. “We come up with different ideas about commerce, wearables, interaction in physical space and more. Some of those ideas just sit there and some stick: the ratio is about one in ten. We put ten ideas out there and one of them becomes magic.”

It’s fair to say that not every founder will have the resources or the time to take such freedom. Argodesign was started with the money in the pockets of four ‘partners’ – Rolston, Jared Ficklin, Kevin McDonald and Mark Gauger – whose average age certainly surpasses the startup norm. Some had established reputations that earned them early media coverage, which led to their first customer, which came from Japan of all places.

The experienced quartet was in a position to take a longer-term view of their business, such as doing startup client work for equity rather than cash, or doing royalty deals. Nonetheless, through ‘taking risks incrementally’ growth has already been remarkable, and they’re now employing over 35 people. Clients range from Intel and United Rentals to Cognitive Scale, which has also grown rapidly from startup status during its time working with Argodesign.

But a conversation with Rolston makes you realise that talking about business isn’t really the thing that gets him going. He’s excited about exploring new technology and its possibilities. And while he and his team frequently do that for a specific client, they’re just as happy doing it for ‘the passion of the act of making.’ Much of the Argodesign website is simply concept or ‘provocation’, whether it be an ambulance drone or new seating and embarkation ideas for Hyperloop.

What Argodesign showed off at Pioneers’17 – namely the emerging possibilities to enjoy headset-free mixed reality – is especially exciting for Rolston. Driven by better and cheaper projection technology and computer sight (a computer’s ability to recognise space and objects) these could mean we slowly start saying goodbye to physical phones and tablets.

“Imagine annotating items in the physical world, instead of diving into a little screen,” he says. “Like a busy kitchen counter or office desk. And it could be any kind of information that helps us in that moment, say assembly instructions or cooking guidance.

“On a humanistic level this means clearing away the machines from those moments – hiding them in the woodwork. We think that’s pretty cool and we’re enamoured with the possibilities.

“What people want is information at the time they need it. If we could have screens that just appear when needed, it would be wonderful. So we’re exploring that model, a new way of interacting with tech.”

And if Rolston had any doubt that such new forms of interaction can catch on, then the reactions he sees to demos like the one at Pioneers’17 put those to bed. Passers-by took very little time to get used to bouncing a sliver of light off blocks of wood or glasses of water.

“People quickly take that digital object for granted as part of the space. Once you see it bounce off a physical object, which is kind of magical the first couple of times, you begin to play as if all the objects are together. That’s the most convincing moment to me, just in a simple game.”

And one big reason why this kind of digital interaction is starting to be taken so naturally is that you no longer need to wear some kind of glorified paintball mask to enjoy it.

“I’m not going to wear ridiculous headgear to go and eat lunch with you,” says Rolston. “But I would like the access to computing! I don’t think headsets work for casual computing. It might work with an eye implant – but that’s way out there in the future!”

Speaking of which, Rolston has some graphic ideas on how digital augmentation is set to revolutionize our very identities. Ideas you’ll find either scary or exciting, depending on your point of view!

“When we have more access to computing, it changes us as people. And our ideas about our independent selves change. Today, you’re probably very comfortable about the idea of what you know and are good at, which defines who you are. Moving ahead, you will have abilities which do not come from within but are driven by access to technology.

“Tech becomes less distinct from you and more entwined. Capabilities blur, and we become inseparably digital and analogue creatures. Down the road we can imagine systems that know us so well they can start to make decisions for us, meet people and have conversations. Like an independent version of us in the cloud that can operate for us. We could send that version out to buy a new car, or go out and talk to a friend about what he is doing on the weekend.

“My computer and my friend’s computer could agree to have lunch on the weekend. But in the broader sense that’s still us – it’s ‘MetaMe’. It sounds wild, but just look at how LinkedIn suggests you ‘congratulate’ somebody with just a click. Today everyone gets the same script, but tomorrow you’ll get a script written just for you.”

One gets the feeling that big thoughts like these are where pretty much any conversation with Argodesign would lead. And the list of things they might work on is potentially endless. It’s only limited by how much technology is out there, concludes a founder who isn’t shy of an impactful quote or two.

“We like to take some form of new tech and make it useful to the world. There’s enough raw tech out there. What we’re doing is exploiting raw technology, not inventing it. So think of us as exploiters.”